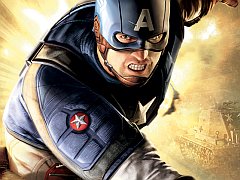 Captain America: Super Solider could well end up being the best surprise of 2011. It’s quite fair to say that SEGA doesn’t have a great track record when it comes to its Marvel titles (Thor anyone?), so I went into this expecting the worst. What I got was a heavily Batman: Arkham Asylum inspired action title from Next Level Games which, while a little rough around the edges and clearly in need of its own dose of Super-Soldier serum, is a fun comic-book romp with satisfyingly meaty combat.

One of the reasons Captain America turned out as well as it did could be that the story here isn’t really that closely tied to the movie. While you get many of the same characters, including Chris Evans as Steve ‘Cap’ Rogers, the game is set within castle grounds in the Bavarian mountains. Film villain Red Skull makes an appearance, but your main foe is scientist Armin Zola, who is trying to recreate the serum which gave Rogers his powers. Creating a side story to the film no doubt gave the development team more room for creativity.

First impressions aren’t brilliant. While the world Next Level Games has created has a nice solidity to it, there’s no denying that certain areas are very bland, the frame rate is almost always below par, and lighting at times looks like it’s been lifted from a previous generation. The opening sequence, which sees Captain America turn up in some trenches to take on the evil Hydra army, isn’t great, but soon enough you enter a pseudo open-world interconnected by a sewer system and the game’s quality is elevated up a good few levels.

Combat is the key to the game’s success as a fun superhero title. Taking its cues unashamedly from Batman’s successful outing, you’re given a single button to dish out punches and kicks, all chained together in a way that looks far more spectacular than it has any right to. On top of this there’s a grab button, the ability to throw your shield at enemies or objects in the environment, and a modifier that lets you perform special attacks as long as you’ve got enough juice in the super meter.

Defensive play is just as important as going on the attack, with Cap’s shield able to withstand some heavy firepower. Projectile attacks can be blocked and deflected back at enemies if you get the timing right, which not only takes out the pesky soldier responsible but also helps recharge your super attack energy. Counter attacks and other more advanced special moves can be unlocked as your earn credits, so the game’s combat evolves just enough over the course of the adventure to keep things interesting.

Enemy variety is handled well too, with new enemy types cropping up regularly – each requiring a slightly different approach to take them down. Mixing up your numerous attack options against large groups is where the game is at its best, with slow-motion finishing moves highlighting Cap’s power in an extremely satisfying manner.

Boss fights come thick and fast, but not to the point that they feel forced. Rather than give each a weakness, you’re generally asked to use your skills to fight them, which is quite refreshing. Nimble use of evasive and defensive manoeuvres is the order of the day until you’ve got enough juice to unleash a devastating super attack.

Less impressive, but surprisingly fun, are the simple platforming sequences. Leaping from pole to pole in a very gymnastic fashion is nothing more than a single button press, but time your leaps properly and you’ll be rewarded with more fluid movement and earn bonus credits to spend on upgrades. There’s a slight Prince of Persia feel to these segments and they will no doubt come across as entirely pointless to some people, but I found them quite fun.

It seems that Captain America might have kleptomaniac streak as I’ve never seen so many collectibles in a video game. Dossiers, boxes, film reels, ceramic eggs and more are scattered about the levels, seemingly around every corner. You can unlock some cool stuff by picking these things up, such as challenge levels and video clips, but there’s so much of it that it becomes a bit of a joke.

This almost blanket coverage approach to how collectibles have been placed in the levels suggests it wasn’t something the developers had much time to do. The same can be said about the underground sewer system, which I only found late on in the game and used once. On discovering it you’re told it’s the way to quickly reach various parts of the game world, but its inclusion seems largely pointless given how (for whatever reason), its existence only came to light when it was essentially too late in the day to matter.

There’s also a heavy reliance on two mini-games. One, in which you move two wires close enough together to cause a short, is used over and over again to blow up machinery. Another, in which you decipher two alphanumeric codes by highlighting the single common element, is used to open locked doors. Both occur far too often and would have benefited from being cycled in with a number of other mini-games that did the same job.

Despite these signs of a slight rush job and the mixed presentation, I couldn’t help but have a good time with Captain America. The campaign can be knocked on the head in around six hours, Arkham Asylum is a far superior comic book title, and the whole thing could have done with substantially more time in development, but I had fun. Outside of Arkham Asylum I can’t think of another superhero game in recent memory I can say that about.

Despite signs that this was a slight rush job, Captain America is a fun super hero game. There aren't many you can say that about.
7 New moves are regularly unlocked Combat is simple but meaty Some bland environments Certain elements seem rushed