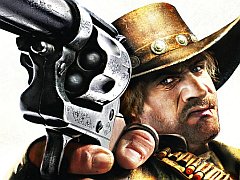 A really good wild west shooter seems like a pretty easy game to make. Considering you can wander into any video game store and buy a number of excellent war games or titles that pit you against invading aliens, a guy shooting a few enemies in run-down desert towns doesn’t sound like a game design nightmare. Yet, it more or less has been. Other than the entertaining Outlaws, released on the PC in 1997, and perhaps Red Dead Revolver and GUN at a push, there’s been a dearth of quality games that let you pretend you’re a cowboy. The original Call of Juarez almost got it right, but too many forced stealth sections made it a game of two halves. Does the sequel, Bound in Blood make things right?

Bound in Blood, set years before the events of the original game, does away with stealth character Billy completely, focussing on brothers Ray and Thomas McCall. You’re in the midst of a civil war, yet the brothers desert their regiment to head to their family home to protect their mother and other brother, William, from the enemy. It’s not a move that goes down well with their commanding officer, who makes it his life mission to bring the two men to justice. The story takes the three brothers across Mexico and the United States as they proceed to make trouble and eventually go on the hunt for a medallion that holds the key to finding the long lost treasure of Juarez.

Ray will be familiar to fans of the original and his character is largely the same here, although he’s yet to find God. He’s strong, good from close range with dual wielded pistols, can bash through doors and plant dynamite. Thomas, on the other hand, is better from range with a rifle, can latch onto certain objects with a lasso and can use a bow and arrow. William isn’t a playable character, but he plays a major part in the story, with his religious beliefs acting as a counter to his brothers’ less than moral values.

You can choose whether to play as Ray or Thomas in more or less every level, with each character’s abilities often meaning that you can take different paths and experience the game slightly differently. Due to Thomas’ ability to reach higher ground and his skill with a rifle, he’ll often get into position to offer support to Ray while he’s taking down enemies from close range on the ground. Strangely, and quite disappointingly, there’s no co-op play, despite the campaign being perfectly designed to offer a two-player experience.

For the most part Bound in Blood plays a lot like your average FPS, albeit one with sharpshooters, the odd bit of knife throwing and sticks of dynamite. To spice things up a bit the brothers have a special concentration mode ability, allowing them to take out a number of enemies in a flurry of shots. When Thomas has filled his special meter he’s able to paint targets on enemies and then automatically shoot all those who are tagged. With Ray you pull the right analogue stick back and then push it forward (on consoles), shooting as many enemies as possible without having to target them manually.

This wouldn’t be a Wild West game if there weren’t any shoot outs, and Bound in Blood throws in quite a few of these special one on one moments. When facing key enemies the game zooms in on your character, showing the action from a third-person perspective, and gives you limited control over movement. You simply need to circle your opponent, making sure he stays in view, and keep your hand as close to your gun as possible. When the bell tolls you need to grab your gun then fire off a shot when the target runs over your enemy. Do it before he gets a good shot off at you and he’ll drop dead. Although these shoot outs occur fairly infrequently, they’re tense affairs and one of the highlights of the game.

Bound in Blood is a fairly linear experience for the most part, but from time to time you’re presented with optional missions that can be taken for cash. These vary in what you’re asked to do, but it’s typical cowboy stuff. Someone might be offering a reward for bringing them someone dead or alive, another villager might want his cattle rounded up, while another will pay good money if you retrieve some stolen goods. Cash is needed to buy better weapons and ammo, so it pays to take a break from the main storyline in order to stock up on the better equipment. There’s the odd bit of horseback action too, the occasional bit of on-rails shooting and fairly frequent target shooting in combination with your brother.

Bound in Blood’s problem is that it never really gets beyond being a solid, fun shooter. There’s nothing particularly thrilling about the story, despite it being perfectly decent; the gun-play can occasionally feel off, with enemies at close range often seeming able to dodge bullets from an inch; escort missions are always painfully slow; and cutscenes suffer from some terrible lip syncing and poor animations. Worse still is the rather bizarre cover system that developer Techland has opted for. The automatic system does its job, but feels far from natural and unlike what’s expected from a shooter.

Visually it’s often a spectacular game to look at, with huge open vistas that stretch as far as the eye can see, terrific lighting and highly detailed environments. The frame rate sadly takes a dive a little too often, though, and characters don’t quite appear at one with their surroundings, walking awkwardly over uneven ground and interacting with one another as if robots. The technology here is top class, but it certainly feels as if a little more care and attention was needed to make the most of it.

Multiplayer makes an appearance too, doing its best to capitalise on the Wild West setting. There’s your standard deathmatch type modes, complete with levelling up your character as you earn cash for kills, but more interesting is the team-based scenario mode in which you take part in famous battles from Western history. Whether you’re robbing a bank or the team defending it, or attempting to kill a lawyer or act as his bodyguards, these objective-based games have far more character than plain old deathmatch. We can’t see Bound in Blood gaining an online following to rival the best shooters in the business, but a dedicated fan base is almost guaranteed.

Call of Juarez: Bound in Blood doesn’t make the most of its setting, but it’s a solid FPS with a few twists to give it an identity of its own. It’s often gorgeous to look at and the story is worth experiencing, but the multiplayer is nothing more than a slight distraction and the lack of co-op is a missed opportunity. Bound in Blood is worth a look, but as a sequel it doesn’t take the series on enough.

Call of Juarez: Bound in Blood doesn't make the most of its setting, but it's a solid FPS with a few twists to give it an identity of its own.
7 Looks brilliant at times Two characters offer different gameplay Cover system is awkward No co-op is a disappointment

Call of Juarez: Bound in Blood

Call of Juarez: Bound in Blood