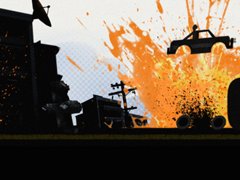 Destruction is the name of the game in Burnout Crash. If the screen isn’t a canvas for burning hatch-backs, upside-down lorries and the smouldering remains of buildings, you’re probably doing something wrong. While in the real world, with its seat belts, traffic lights and sleeping policemen, you’ll do everything possible to avoid a vehicular altercation, in Criterion’s first XBLA and PSN offering you’ll do anything possible to cause them.

True, this isn’t the Burnout you know and love. A cartoony aesthetic and gameshow vibe immediately separate the game from the rest of the series, but Criterion is adamant that, in some ways, Burnout Crash is more Burnout than other Burnouts. Regardless of whether the change in tone works for you or not, there’s no denying the 80’s gameshow feel is executed well. With cheesy vocal motifs, boinks, buzzes, and the occasional outburst of Spandau Ballet’s ‘Gold’, this is the perfect compliment to the erratic nature of the game.

The idea behind it all is simple: cause as much vehicular carnage as possible and thus prevent cars from leaving the intersection (or crossroads, as us Brits prefer to call it). This is achieved through your Crashbreaker, where a tap of the A (or X, for PS3 players) button will explode your car’s engine, sending it flying in a direction of your choice. It’s about crucial timing, anticipating the right moment to blow up your car for maximum points. Burnout Crash is all about those points, too – it’s about high scores, leaderboards and rubbing your friends’ noses in it when you beat them. God bless you, Autolog.

The simple crash mechanic is brought to life in three modes: Road Trip, Rush Hour and Pile Up, each with five stars to earn for meeting specific, usually score-based, requirements. In each of the six locations Road Trip must be completed before unlocking the other two modes, and involves strategically planning your pile-ups so that no cars entering the crossroads make it out the other side. If five or more slip through unscathed, it’s G-to-the-ame Over, man.

The tactics you’ll employ are largely defined by your choice of vehicle. While the Strongbox truck has impressive damage, its aftertouch – the distance it can travel after the initial explosion – isn’t so great. The Dust Storm, on the other hand, can travel half way across the screen with a single tap of a button, but its power rating pales in comparison. The more stars you earn, the more interesting vehicles you’ll unlock.

While there are few things in life more satisfying than blowing things up, it does often feel like your actions are inconsequential. You can sit in the middle of the intersection for extended periods of time without pressing a single button and carnage will still unfold around you; reserving your Crashbreaker until precisely the right moment is a key strategy, in fact. The game finds ways of purging the carcasses of crashed cars from the map, and this is the last thing you want when you’re trying to create a blockade. Explosions are triggered regardless of whether you want them to or not, which often puts to waste all your hard work blocking exits. Any kind of strategy in Road Trip is quickly ruined by power-ups and other factors which lie outside of your control.

As you flit from crash to smash, a meter in the top-left of the screen will gradually fill based on how much damage you’ve inflicted on the area. When it’s full you’ll be awarded a power-up, usually involving a certain type of vehicle or environmental oddity interrupting the intersection. Police cars, for example, will set up road blocks at one of the junction exits; bank trucks will drop huge sacks of cash once they’ve been hit; and ice cream trucks will bring about the Big Freeze, stopping all traffic in its tracks.

If you manage to prevent a set number of cars passing through the junction, you’ll activate the Special Feature: a screen-filling power-up that destroys everything in its path. Survive to the end of the Seacrest Drive stages (which you might recognise from Hot Pursuit, incidentally), and a tidal wave of biblical proportions washes over the screen, destroying anything in its path. In Roswell, a UFO descends from the heavens above, savaging the area with a big fat laser. In Blueclaw, a two-story tall lobster monster hauls itself out of the sea and embarks on an angry rampage through the area. To reinforce an earlier sentiment: Burnout Crash is a silly, silly game.

Pile Up plays out in a similar way to Road Trip, except for every car that escapes, your multiplyer decreases. After a set number of cars have passed through the intersection, Inferno mode is initiated, and you have a few seconds to chain together as many explosions and crashes as possible. Obviously the better you played up until this point, the higher your multiplyer will be, and thus the bigger your score. The round ends when you’ve run out of things to blow up and you’ve left yourself stranded, so clever positioning is crucial. Without careful planning, Inferno Mode can be over very quickly, which can be more than a little frustrating.

Rush Hour is my favourite of the three modes, giving you 90 seconds to be as bad behind the wheel as possible. It doesn’t matter if you let traffic slip through your net here, although the more cars you smash, the better. It’s simply about chaining your Crashbreaker together as effectively as possible. At the end of the 90 seconds, your car will explode in a much more devastating way than usual, enforcing the need for smart placing before the timer runs out. While score is always of the utmost importance, Rush Hour seems to lend itself to Autolog much better than the other modes.

A new addition to the social tech allows a player to set a score in any location or mode, and then challenge a friend to beat it. The score you set is specific to that challenge – it doesn’t take your highest score overall – making each event separate to your past endeavours. While Autolog is already a great platform for inspiring rivalry, the new Challenge system takes things a step further. With any luck there’ll be a similar feature for Need For Speed: The Run, which also makes use of the Autolog system.

Another innovation Burnout Crash takes advantage of is Kinect. In Party Play, players can move about their real-world environments to steer, and then jump – or execute other exaggerated movements – to activate their Crashbreaker. You can only use Kinect for multiplayer, though, which makes sense given that nobody is going to be setting any high scores without a controller. Interestingly, there’s no multiplayer without Kinect (or in the PS3 version, for that matter), but this is no real loss given the extensive Autolog features surrounding the game. It’s a nice inclusion for a downloadable title, but it’s yet another awkward control scheme, and ultimately few people are going to use it.

Once the Crash Wall is populated with enough names, the addictive nature of the game begins to shine. It inspires that one-more-go mentality that turns quick time-wasting sessions into marathon gaming slogs. That said, I often felt that my scores were just as dependant on luck as skill. There are strategies for scoring big, of course, but there are too many extraneous variables that can interfere with this.

Still, it’s hard not to have fun with the game. Burnout Crash is everything a downloadable title should be: simple, addictive and well priced. Those still in a strop that it isn’t the ‘proper’ Crash mode that we’ve seen in Burnout games previously are missing the point. It is what it is, and it is jolly good fun. It’s got some problems in terms of skill not correlating to score, but nobody’s going to be complaining about this in the midst of a fierce score-based battle with that jerk one place above you on your leaderboard.

Those still in a strop that it isn't the 'proper' Crash mode that we've seen in Burnout games previously are missing the point. It is what it is, and it is jolly good fun.
7 Great soundtrack Autolog is a great fit Luck plays a big role Kinect will go ignored