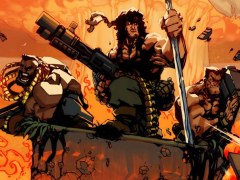 Containing perhaps the only legally acceptable use of ‘bro’ in the last fifteen years, Free Lives’ game is a fun side-scrolling shooter which celebrates 80s and 90s action movies while also being cleverer than it looks. Imagine Contra meets Kid Chameleon via Super Meat Boy, with a touch of Sensible Software’s irreverence, and you’re there. (Not that many of you may need to imagine, of course, as Broforce has been out in some form or another for what seems like decades now. Onwards.)

Broforce’s setup is deceptively simple: blast from left to right across whichever geopolitical hotspot you’re currently in, taking out bad guys and vaulting across – or blasting through – platforms, rescuing POWs until you run into Satan (who is a businessman, obviously). Kill him and a helicopter will arrive to rescue you. It’s accessible, fun, immediate, and in keeping with a game spawned from a Ludum Dare effort called ‘Rambros’.

Beyond the bluster and Bayhem there are some interesting mechanics, all of them centered around the roster of ‘bros’. Players only get one life to start with per stage: rescuing POWs grants you an extra go, but it also means that you take on the powers and weapons of the ‘new’ bro. So you may really enjoy playing as Blade, but – knowing that one hit can kill – you’ll have to decide whether to carry on with him and hope you make it, or rescue a bro and potentially be stuck with MacGyver.

These decisions are at the heart of Broforce, and are the basis of most of its action and a lot of its humour. Given the amount of barrels, grenades, subterranean diggers, attack helicopters, and general idiocy, the stage is going to get torn up pretty quickly. Having the right bro – or adapting to the ‘wrong’ one – is half the fun, and you’ll be flying across, over, and under post-apocalyptic cities, Vietnamese jungles, and even Hell itself.

Some of the bros are out-and-out duffers – Indiana Jones and the Rocketeer being two of the worst offenders – but for every poor take there’s two good ones. Robcop has his targeting ability instead of grenades, enabling him to take out enemies all over the map. Walker, Texas Ranger’s shotgun makes him perfect for drilling through levels. JCVD from Timecop can slow down…time. Perhaps best of all is Jay from Men in Black, whose Noisy Cricket is both powerful and hilarious, sending him flying backwards and everything – including any co-op players in the bunch – else scattered in every direction.

At its best, Broforce moves quickly and forcefully, throwing the player around disintegrating maps, a risk-reward system of imminent death outweighed by how much fun it is to move around the world. The stages aren’t particularly challenging, in a platforming sense: it’s more likely your need for forward momentum and desire to blow up more shit that will get you killed rather than an enemy (weapon ranges are limited, and death-falls are tempered by bros being able to grab onto walls and burrow through them). Falling debris or accidentally setting explosives off are the main cause of failure, although in two player it’s easy to lose track of your avatar among the chaos, resulting in some cheap deaths.

At first glance, Broforce’s lack of an overt time/score mechanic seems to harm the game, enabling players to stand off and inch their way through the levels. Fortunately, the destruction is enjoyable enough to dissuade most from that idea. It could still use some more overt scoring systems in single-player, but with two or more bros playing at once natural competitiveness kicks in, with teams destroying platforms from under each other, or trying to get on the rescue chopper first. There’s also tension when only one bro is left, desperately hunting a prisoner to rescue to get someone else back in the game. If they fail, they’re going to know about it. It’s one of the best couch multiplayer games I’ve played in quite a while.

Whether Broforce has the legs to keep you interested beyond a few days play is probably dependent on the amount of people that you can get to play it with you (it does have an online mode, but this feels like it should be in-person multiplayer, if only for the boiled piss), but it’s a great laugh nonetheless.

Imagine Contra meets Kid Chameleon via Super Meat Boy, with a touch of Sensible Software's irreverence, and you're there. One the most enjoyable couch multiplayer games I've played in quite a while.
7 Great fun with friends Superb destruction Some cheap deaths Some characters aren't great