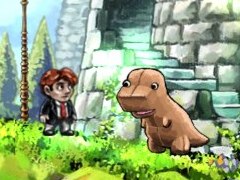 We’ve never played a game like this before. Braid looks like just another platformer, albeit an extremely well presented one that could well make “games are art” lovers fall to their knees and cry tears of joy, but it’s nothing like you expect. Although a platformer in the most traditional sense, jumping plays second fiddle to the power of time. 1200 MS Points might seem high for an XBLA release but it’s a small price to pay for one of the most original games released in years.

Initially it’s easy to be impressed by the watercolour backgrounds and the relaxing music. We often long for 2D platformers to make a comeback and Braid is a shining example of taking the classic genre into the modern era from a graphical standpoint. It’s so simple yet so beautiful, and that’s something I just don’t say about games. The last game I played that had a similar effect on me was Team Ico’s Shadow of the Colossus, putting Braid in very good company indeed. And this is all from the game’s title screen.

Once you start on your adventure to find a princess (could there be a bigger nod to the most famous platforming series ever created?) the game rarely skips a beat. There’s no need for a tutorial because instructions are built into the opening few stages of the first world. Even your first encounter with time manipulation won’t leave you too confused. For such a complex idea to get your head around the game should be applauded for managing to make it seem like just another gameplay mechanic.

Of course, this is just the opening level. Things soon become a lot more advanced and will leave even the most intelligent thinkers scratching their heads for long periods. Holding down X rewinds time and from here you can accelerate in stages by tapping LB or fast forward in stages by tapping RB – a single tap on RB while in the standard rewind speed will cause time to pause.

These kind of controls have been seen in other games, but never before will you have seen such wickedly created levels as those in Braid. Each world is split into stages, with each stage effectively being a puzzle. The primary goal in each stage is to make it to the exit, which often requires you to grab a key and unlock a door – something that’s never as simple as it looks. To begin with you’ll think you’re smart after working out what appear to be devilishly hard puzzles. A key lies in a pit of spikes. Fall to your death onto the key, rewind back and you’re sorted. Clever, yes, but it’s just the tip of the iceberg.

Before too long you’ll encounter items that aren’t affected by your time powers. These glowing objects or enemies don’t react at all as time is warped around them. This is how Braid takes puzzles to another level and is able to use brain cells you thought had packed up and cleared out long ago. Whether it’s a moving platform that clearly holds the solution to a level or an enemy that is struggling to survive, you’d be wise to stock up on fish for some much needed extra brain power.

If all this sounds brilliant, we haven’t even mentioned another major element to the game: collecting jigsaw pieces. Scattered about each level are jigsaw pieces, used to make a picture in the level and back in your house-like hub. Collecting every puzzle piece in a level often seems impossible, but it’s not. You might well spend days trying to get a single piece only to leave it for a while and realise you missed something completely obvious. The lure of collecting them all has always been strong in video games, but here doing so makes you feel good about yourself. When you finally figure out how to reach that elusive jigsaw piece you’ll want to tell everyone about it, even if they likely won’t care or have a clue about what you’re talking about.

In truth the game extends far beyond what you’ve read so far in this review, but talking about exactly what happens and how the time control changes would spoil what is without doubt the finest, most original Xbox LIVE Arcade game to date. It has looks to die for, character bursting out of every animated seam, a charming storyline and a near perfect difficulty curve.

People may well argue that the game is over too soon. It’s a valid complaint in a sense, but your time through to completion will vary wildly from someone else’s. You could easily get stuck on a certain jigsaw piece for days, replaying the same section over and over again. Speed runners (there is an option to speed run the game once you’ve completed it) will no doubt be able to rush through in less time than it takes to make a cup of tea, but that’s not the point. You’ll savour every moment of Braid.

It’s also a game that you can stick on in front of a room full of people, and everyone will take part, shouting out their own misguided solutions while lambasting your idiocy. The game itself doesn’t even have a whiff of multiplayer shenanigans, but it can be one of the best group experiences on the Xbox 360.

When Xbox LIVE Arcade was announced there was this hope that it would be a platform for original, quirky games that would otherwise struggle to find a publisher. The service has certainly seen some incredibly high quality games (Geometry Wars 2 just last week is amazingly polished), but Braid finally fulfils that promise. It’s a game like nothing you’ve ever played before and something we can’t recommend highly enough.

Braid is a game like nothing you've ever played before and something we can't recommend highly enough.
9 Amazingly creative puzzles Superb 2D visuals Gets people playing together Can be finished quite quickly