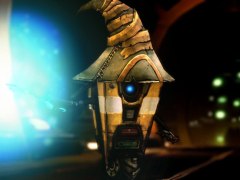 Borderlands brought us cooperative FPS loot hunting years before we knew about Destiny, and for many is a more enjoyable experience. Gearbox’s most successful IP of all time managed to get over a troubled development (that saw the game’s art style change completely) by blending compelling ‘shoot and loot’ gameplay, massive open worlds, tons of gear to collect and a great sense of humour. Borderlands: The Handsome Collection gives PS4 and Xbox One owners full HD versions of Borderlands 2 and The Pre-Sequel, as well as all the DLC for both, and adds four-player split-screen.

I’ll be honest, I haven’t played through the entirety of The Handsome Collection. I’m not sure how long it would take, but there’s an absolute ton of content here. If you don’t already know how good the core games included are, I’ve selected some choice quotes from our existing reviews of Borderlands 2 and The Pre-sequel on last-gen systems and put them underneath this appraisal of the collection. What we said back then holds true today – afterall, Borderlands 2 only released in 2012.

As for the quality of the ports (PS4 version tested), it’s fair to call it decent rather than excellent. Borderlands 2 appears to run in 1080p at a pretty consistent 60fps, a nice step up over the game on Xbox 360 and PS3. Its cel-shaded art style hides the low-poly models and environments (in comparison to a shooter made for current-gen) very well, and the frequently impressive vistas are all the nicer thanks to the significant resolution bump. Downsides come from shadow detail having ugly pop-in, with the quality suddenly increasing at close distance, and some slow texture loading when you enter a new area – both issues that I’d have expected to be better on current-gen systems.

The Pre-Sequel benefits from the same improvements over the last-gen version, but the frame rate often struggles to hold its 60fps target and comes across far more sluggish as a result. Considering the visuals on display here are very last-gen in origin the stuttering isn’t really acceptable.

For some the big new addition to both games is local four-player split-screen. If you’re a fan of couch multiplayer and long gaming sessions, this could well be the major selling point. Understandably the frame rate drops here to 30fps, with Borderlands 2 performing the better of the two titles. The Pre-Sequel falls below this figure far too often, which hurts the experience, while the equipment menu must be zoomed out to be fully seen – something that takes some getting used to.

Despite being less than perfect technically, Borderlands: The Handsome Collection is easy to recommend. It’s the best way to experience two great titles if you don’t have a gaming PC, has more (good) content than most people will ever play and features new local multiplayer support. If you’re new to the series or looking to jump in, you could well be playing this until Gearbox release Borderlands 3.

Borderlands 2 is the kind of game where you’ll be driving at a few hundred miles per hour and happily veer off a cliff because you saw something off in the horizon you thought was interesting. There’s floaty jumps and (eventually) four weapon slots, and you don’t take stuff like fall damage because, let’s be honest, who has the time? Also: guns and explosions.

Your window into this manic world is via one of the four new characters, with a fifth being made available post-launch as DLC. Each is a nice spin on traditional RPG roles – tank, ranger, thief and mage – while also packing a more varied and distinct twist than Borderlands’ original quartet.

I like the new roster of characters, but the randomly generated guns are still the game’s undisputed stars. Colour coded by rarity, the key thing to consider now is the elemental effects, which have been made more potent since the original – meaning you’ve got to spend more time considering how best to fill your backpack.

It’s all tied together by a tight script, rich in comedy and packed with both character and characters.

Though the game manages to be eminently playable in single-player, co-op is how Borderlands 2 is meant to be played. There’s no shortage of games making tired claims about being more fun when played co-operatively, but Gearbox makes a noticeable effort to encourage it with visual customisation options, loot storage and a trading system. Borderlands 2 feels like a game four people are playing together rather than in tandem; a subtle but crucial difference.

If you like shooting things, levelling up and exploring every cubby hole across a massive, varied world – if you love games, basically – then Borderlands 2 is definitely for you.

Set between the first two games, The Pre-Sequel tells the tale of Handsome Jack’s rise to prominence. The playable characters have also featured in the series’ previous entries, and each offer their own distinct abilities.

As well as the individuality of the roster, taking the series to Elpis, Pandora’s moon, has also added great variety to combat. While running to-and-fro oxygen geysers or searching for o2 tanks can be a pain, the new floaty mechanics coupled with butt-slams and glides means that taking down bad guys feels completely different to what went before. Juxtaposed with the indoor, oxygen-and gravity-filled environments, it means you have to approach the different sandbox clashes in a variety of ways. When in zero-g terrain, I can leap above enemies entrenched in cover and slam them into an early grave, whereas when inside, a little more caution is needed, though often never taken.

The floaty jumps also make exploration more interesting. Finding loot means not only looking at your feet and in lockers, but also trying to get atop every building you come across. Finding ways to traverse environments can be just as entertaining as the combat, though some side missions try to convert the mechanics into a pure platformer, which it can’t quite achieve.

This being a game made by 2K Australia, it’s probably not a surprise to learn that the development team has infused your enemies with a certain local ‘charm’ . Enemies will yell “Strewth!” upon their demise, you’ll hear “Bonza”, “Blimey” and other assorted Aussie slang throughout your time on Elpis. It makes the inhabitants somehow rather lovable, which is tricky when you’re shooting 95 per cent of them. The Pre-Sequel’s humour and wit serves as a great mask for what is, at its core, a grim tale. It’s always nice to know that, during some of the narrative’s most wincing moments, I can always glance across to see “Your Mum” smeared across a wall.

While 2K Australia has spiced up Borderlands’ combat, it has wisely opted to follow the established rulebook for most other areas in the game. We still have the three-branch skill tree, Badass tokens, and so on. Sadly, pacing is an issue. The first half of the game trudges by at a snail’s pace and can be filled with long walks or drives from quest-giver to objective, which gets old quick. Once you move beyond this point and get to the real meat of the story, action becomes much more frequent and there are far more combat sequences to distract you from the traversal. It’s just a shame it takes so long to shift gears.

The game’s style is still distinct, but technically it is starting to show its age a bit. The comic-book art style means the colour palette can paper over the cracks, but this world has more sharp corners than a 1980s Skoda.

Despite these issues, Borderlands: The Pre-Sequel is an enjoyable game. It does exactly what a Borderlands game should: offer great shooting and fun looting. The introduction of moon-based combat has added some spice to general gameplay, while Aussie voice acting has also injecting some more character into what was already one of the more entertaining series on the market.

If you're new to the series or looking to jump in, you could well be playing this until Gearbox release Borderlands 3.
8 Loads of good content Resolution and frame rate are great in Borderlands 2 Great fun with friends The Pre-Sequel doesn't run smoothly