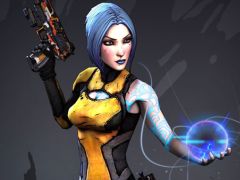 Borderlands 2 stinks of money from start to finish, cementing the series’ transformation from the little game that could to the blockbuster game that must. Developer Gearbox has boasted of increased budget, staff and scope for the sequel to its breakout franchise, and the fruit of these investments clearly shows. While the original Borderlands won us over with charm, the sequel succeeds by actually being good.

This is the game Gearbox both wanted and needed to make, rejigging a successful role-playing shooter template and refining it just enough to make it one of 2012’s first genuinely must have AAA games. Borderlands 2 showcases all the excitement, razzle and oomph a mammothly high-budget boxed title can produce when at its best.

This is a game of skill trees, side quests and comically massive explosions, but Gearbox’s most successful party trick is the way it manages to focus Borderlands 2 inside Pandora’s broad open world. Variety, as they say, is that elusive spice of life, and the lack of it was where I trailed off with the original game. Borderlands’ randomly generated weapons didn’t distinguish enough, while the enemies stayed the same, and the backwater aesthetic homogenised your sense of progression into one giant sandy blur and occasional Claptrap soundbite.

Borderlands 2 opens with knowing acknowledgement, dumping the player, alongside the occasional Claptrap soundbite, into miles of snowy valleys – because snow is basically the opposite of sand, right? It’s not long before you’ll need to be busting out the suntan lotion, but there’s something to be said for the game’s frequent ability to take you across myriad environments, often across massive quests that throw everything at you bar the kitchen sink. There’s an absolute tonne to see, and unlike the original it’s all very much worth seeing.

It’s a fun game, and by that I mean actually fun rather than the ‘fun’ Gearbox tried to peddle with Duke Nukem Forever. Borderlands 2 is the kind of game where you’ll be driving at a few hundred miles per hour and happily veer off a cliff because you saw something off in the horizon you thought was interesting. There’s floaty jumps and (eventually) four weapon slots, and you don’t take stuff like fall damage because, let’s be honest, who has the time? Also: guns and explosions.

Your window into this manic world (Pandora is probably what would happen if you put Texas and LV-426 from Aliens through Jeff Goldblum’s wonky fly-man teleporter, and then added the odd robot) is via one of the four new characters, with a fifth being made available post-launch as DLC. Each is a nice spin on traditional RPG roles – tank, ranger, thief and mage – but packing a more varied and distinct twist than Borderlands’ original quartet.

Take Salvador for instance, the tanky mexican who occasionally hums music as he goes about his unquenchable gunzerking killing sprees. He puts a nice spin on his damage sponging foundations by having to dish out as much pain as he can take (spoiler: it’s a lot) to stay alive. The rest of the gang has its own schtick, too: the enigmatic Zero can be built into a backstabbing assassin or a long-distance sniper; Axton is your cover-based soldier-meets-medic with a chin that could cut steel; and Maya can immobilise and destroy particular enemies and is also blue, thus inviting ceaseless “why so blue?” quips from your co-op partners.

I like the new quartet of characters, but the randomly generated guns are still the game’s undisputed stars. Colour coded by rarity, the key thing to consider now is the elemental effects, which have been made more potent since the original – meaning you’ve got to spend more time considering how best to fill your backpack.

A rocket launcher that sneezes out whopping great corrosive missiles neatly takes the bite out of whirring vehicular death machines, and a submachine gun that discharges electrical rounds goes through a shield in less time than it takes a student to blast through a DVD boxset of 24. Even the game’s weapon manufacturers now have a more extreme effect on what will actually happen when you hit the right trigger. Most players – especially those that opt for the single-player route – will need to think like a Swiss Army knife.

It’s all tied together by a tight script, rich in comedy and packed with both character and characters. Make no mistake, either, it doesn’t take long before the original’s ensemble cast of characters are folded into the proceedings. Borderlands 2 is peppered with the kind of dialogue designed to appeal to the kind of people who write phrases like ‘jizzy balls’ on Internet forums, but I’ll wager that’s most of us. It’s definitely me. Plot is definitely secondary to this game, but the addition of so much razor-sharp dialogue and an excellent new antagonist in the form of Handsome Jack helps keep things delightfully buoyant. Some of the one-liners on show here are absolute corkers.

There’s still the occasional irritation, mind, mostly coming from the game’s twitchy, unpredictable vehicles that handle like a bull on ice. Driving in Borderlands 2 feels like far more hassle than it’s worth, and before long you’ll opt for the fast travel option whenever it presents itself.

Gearbox could also do a lot more with the way the game presents information on your guns, as it can often be quite tricky to work out whether something you’ve just picked up is actually better or worse than what you’re currently using. For a game that trades on being all about the loot, item management still feels quite fiddly and inelegant.

Still, Borderlands 2 is the kind of game where you’ll find yourself shooting over 200 rocks thrown at you because it feels like the right thing to do, and also because it gives you loads of Badass Rank, the game’s new system of in-game challenges that gives you bonus attributes which apply across any character you make. But, hey, it’s mostly because of the former, though maybe you’re actually feeling that way because of the latter? Whatever: you’ll shoot a ton of rocks, run over enemies, purposefully blast them with the turret of your vehicle and so on and so on, and it will be great.

Though the game manages to be eminently playable in single-player, co-op is how Borderlands 2 is meant to be played. There’s no shortage of games making tired claims about being more fun when played co-operatively, but Gearbox makes a noticeable effort to encourage it with visual customisation options, loot storage and a trading system – standard features that were all bizarrely absent from the original. But these much-needed additions take a backseat to quest design that actually encourages people to chat and comment on what’s going on, making Borderlands 2 feel like a game four people are playing together rather than in tandem; a subtle but crucial difference.

On paper, this sequel reads much the same as the original. But it’s not – it’s a vastly superior game with a sharper focus, better quests and more enjoyable blasting. Borderlands 2 is a gamer’s game, so if you like shooting things, levelling up and exploring every cubby hole across a massive, varied world – if you love games, basically – then it’s definitely for you.