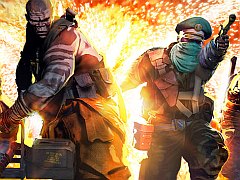 There’s certainly a place for back to basics arcade shooters, but the reality is games like Call of Duty already have that area of the genre covered – even successful attempts like Bulletstorm couldn’t manage to eat into Call of Duty’s audience. Codemasters’ latest crack, Bodycount, is essentially you blasting guns and pretending to blow things up while the most basic of stories leads you from one area of combat to the next. This might have been okay had the combat been exciting, the destruction genre-leading and the visuals strong, but nothing on offer here is remarkable in any way – well, the title screen and music is pretty cool, but that’s about it.

It’s almost entirely pointless mentioning the storyline as it feels so insignificant, but some attempt is made to draw you into the world of The Network – a company whose slogan is “Modern Problems Require Modern Solutions.” This translates to “kill as many people as possible while being able to use a number of not so great special abilities in a variety of dull environments before destroying Tron-like data centres – over and over again.”

To be fair to Bodycount, firing guns is handled decently. You’re only allowed to carry two at once, but weapon stations are dotted about that let you switch around your arsenal and equip guns previously unlocked. There’s the usual array of machine guns, shotguns and pistols, although why you’d want to use a pistol is beyond me. Grenade throwing is also done well here, with standard timed explosives being joined by impact grenades (double tap the button instead of single tap) that are fired at enemies more directly than the traditional looping arcs and explode on impact.

Sadly, that’s where the good stuff ends. While Bodycount’s weapons are decent, the effect they have on enemies feels off. Foes don’t react in a realistic way to being hit by bullets, often resulting in comical falls to their death or bizarre somersaults. What’s more, the knife melee attack on offer is utter garbage, frequently failing to accurately connect and conveying no sense of impact – a huge flaw in a game as action-packed as this.

AI is also appalling, with the waves of enemies doing little more than head to your position or attempt to snipe you. At times they’ll show no sense at all, simply standing with their back to you while you take your time to dispatch them, but for the most part the game causes trouble through a combination of sheer numbers and an awkward control scheme.

Bodycount attempts something a little different with its zoomed view mode by offering two options on one trigger. Hold the aiming trigger down fully and you’ll get a zoomed view of the action but be rooted to the spot, only giving you the ability to lean and duck in and out of cover. However, if you half press the trigger you get a zoomed view and can move about. No doubt this sounded good on paper but in practice it makes for endless frustration when in the heat of a battle – especially as Bodycount’s battles are some of the most explosive around. I didn’t find the system at all practical and couldn’t get to grips with the half-press mechanic.

On top of this, countless enclosed arenas with spawning enemies account for some terrible difficulty spikes, with the bombastic nature of the combat proving too much to cope with – to make matters worse some of the checkpoints are bordering on cruel and it’s often easier to sprint straight through levels to reach waypoints or move from cover to cover while waiting for a countdown to finish.

You are no doubt meant to be able to deal with the hostiles thanks to a quartet of special abilities: Adrenaline, Explosive Bullets, WMD Airstrike, and Target Pulse Wave. Of these the Adrenaline ability is the most useful, giving you a speed boost and temporary invulnerability to bullets, and the Explosive Bullets ability comes in handy now and again, but the other two are either used so rarely they needn’t exist or are next to pointless.

The idea is that you collect Intel (dropped by fallen enemies) to power these abilities, with chains of accurate, explosive or impressive shots rewarding you even more, but the payoff for doing this is rarely worth it. Much more useful in most situations are your mines, which enemies love walking over, sending them and their close buddies to an explosive death.

It’s also somewhat baffling that Bodycount uses the same engine that powers the gorgeous-looking DiRT 3. Although a completely different genre you’d think some of that loveliness would rub off, but it really hasn’t. The best thing to be said about the visuals here is that the game is colourful, but it’s also horribly textured, glitchy, unoriginal and at times plain ugly. Codemasters has bigged up the destruction (or Shredding as it likes to call it), but it’s frankly years behind the curve – even the original Bad Company did it more impressively.

If the core gameplay had been solid the included high-score and multiplayer modes would have been nice inclusions, but only those who manage to find some enjoyment in the flawed mechanics will want to give them a look. Bodycount mode lets you replay completed levels for high scores, while there’s also a survival two-player co-op mode and 12-player Deathmatch and Team Deathmatch.

Bodycount isn’t a good game. It might provide a few hours of entertainment if you’re into basic, straight-up shooting, but the controls and dodgy AI will likely put off most players. Nothing exciting comes from the special abilities and the visuals are disappointingly lacklustre despite their garish appearance. This, along with the admittedly better but still fairly standard modern take on the Operation Flashpoint series, suggests Codemasters should stick with racing.

Bodycount isn't a good game. It might provide a few hours of entertainment if you're into basic, straight-up shooting, but the controls and dodgy AI will likely put off most players.
5 Grenades are good Aiming mechanic is awkward Garish and ugly Horrible difficulty spikes