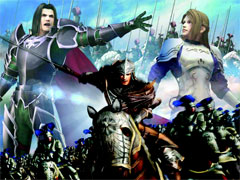 Koei are the undeniable masters of the action-strategy battlefield game. While that in itself is quite some accomplishment, the Japanese developer has actually managed to dominate the niche genre by producing the vast majority of its content. From Dynasty Warriors to Kessen III, the studio has produced every significant battlefield game outside of the colossal isometric RTS and turn-based genres, but despite favourable reviews, the best of their output has never done as well in the UK as it perhaps deserved.

This is probably because of the heavy Oriental focus of the games. From Kessen to the recent Gundam Dynasty Wars, there has been a keen emphasis on Japanese history and culture. The obvious strategy to change this trend is to repackage their classic game formula with a distinctly Western flavour, which appears to be a reasonable explanation for the arrival of Bladestorm, a take on the Dynasty Warriors blueprint that moves the conflict to the medieval wars of ancient Europe.

Those expecting a lazily re-skinned version of the developer’s previous titles are set for a surprise though, as Koei has thoroughly reworked some of the traditional Dynasty Warriors elements, and the result makes for a very enjoyable battlefield romp set predominantly in clashes between France and England.

Rather than simply taking control of one heroic soldier upon whom rests the responsibility of the entire battle, in Bladestorm you spend most of your time directing entire units of armed warriors, such as swordsmen, crossbowmen and mounted riders. You do in fact control just one combatant, but with a tap of the A button you assume control of the nearest unit, and repeated taps allow you to cycle through surrounding groups of soldiers.

Koei has also designed an ingenious system to handle how you control the separate strikes and blows the members of the unit you control make. Holding the right shoulder button commands that they all fight as they find most fitting, while jabs at the main action buttons trigger special attacks, such as a sword swing directed up high to the waists of horse-riding troops. In most cases each button triggers a perfectly synchronised move from all of your men, but as situation demands, they will also apply their attack individually as needed, swinging in different directions and at different times if it means you will deal out more devastation to your enemy as a whole. This cunning system allows for a nice balance between full and direct control over actions, and a more strategic overall command.

Though you are free to roam the crowded theatre of war alone, your efforts will largely be futile, as there is little to be gained from doing anything without the full support of a unit. The secret to Bladestorm comes from strategic hopping from one kind of unit to another, selecting the most appropriate to tackle nearby foes. Units themselves level-up, developing skills and experience, but at the same time your own familiarity with a particular unit’s abilities vastly affects the best situations to use them in.

Say for example, you are facing off against some elite sword wielding enemies, and your nearest melee unit is fairly inexperienced, you might want to take command of a distant band of archers and reign in death from above. While this might sound basic as a core strategic consideration, when you are faced with combining the efforts of the numerous units that fill each battle, as well as taking semi-direct control over men in the midst of an affray, things take a thrilling pace, and at first the experience can feel a little overwhelming.

There’s also a constant need to keep an eye on the map, and the natural tide of the battle as fortresses and strongholds are gained and lost, and assured victory passes in and out of your hands.

Bladestorm’s main problem arises when the action gets particularly intense, as is almost a necessary evil of this type of game. It is very easy to get lost in the chaos of a large-scale melee, and you’ll regularly see an entire unit under your command disappears into a blur of whirling arms and clashing blades as the number of characters on-screen increases to the point where rivals, allies and hoofed beasts become indistinguishable. The map, which you’ll need to keep a regular eye on, is also a little cluttered and hard to read at times, but overall the gameplay model in Bladestorm is very tight and tidy.

Visually this is typical Koei output. The cut-scenes are stylish and exciting, and filled with some intricate detail, but all feature a rather glazed look, and the characters have a slightly wooden appearance. In game the animation is slick and the battles are filled with action, but the aforementioned overcrowding does give you a sense that technical prowess takes precedence over functionality at times. The game’s musical score is decent enough, but there really is some terrible voice acting from the beginning of the game to the end, even by video game standards, which are lacking to say the least.

Bladestorm does provide and incredibly well structured action-strategy game, and it juggles depth and accessibility with panache. If you’ve always been intrigued by the likes of Dynasty Warriors and Kessen III, this might be worth lightening your wallet for, but it is certainly niche gaming, and isn’t without the odd problem.

If you've always been intrigued by the likes of Dynasty Warriors and Kessen III, this might be worth lightening your wallet for, but it is certainly niche gaming, and isn't without the odd problem.
7 Hugely accessible for such a deep strategy title A Dynasty Wars for the Western market The action can get a little overcrowded Terrible, laughable voice acting

Bladestorm: The Hundred Years War will bring to life the intensity and…

Bladestorm: The Hundred Years War will bring to life the intensity and…