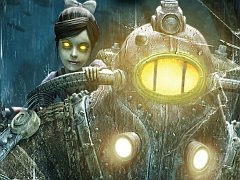 There’s no doubt that revisiting Rapture isn’t quite as special as seeing the dilapidated underwater city for the first time. While BioShock 2 doesn’t make you trawl through the same locations, there’s a familiarity here, but with 10 years having passed since the end of the original game, new enemies are on the prowl, there’s a new dictator in town and the big daddies are no longer alone as the top dogs. A new threat, in the shape of big sisters – agile, plasmid wielding, screaming death merchants – will have you on your toes, fearing for your life every time you hear one of their terrifying, wall-shaking shrieks. Thankfully, when it comes to holding your own in a fight, you’re no slouch either. This time, you are a big daddy.

“But I’ve already played as a Big Daddy,” you cry. Yes, while the end of the 2007 game let you put on a big daddy suit, it didn’t make you feel like one of Rapture’s little sister protectors. This time you awake as the very first, the prototype big daddy, and you’re far more agile than you’d imagine. Not wanting to spoil the plot, you’re without your little sister and you’ll do anything to get her back. With a cast of characters, including new ruler of Rapture Sophia Lamb, all trying to stop you, the fight through the run-down corridors deep under the sea won’t be easy.

Straight away you’ll notice an important change over the original. Instead of having to swap between a weapon and a plasmid attack (the game’s genetic enhancing super powers), you can dual wield. Your daddy’s left hand can shoot out electric, fire, ice, and more mutant-like attacks, with one corresponding shoulder button used to cycle through those in your inventory (hold down to bring up a radial menu) and the other to fire. Your right hand holds a weapon, which defaults to a devastating drill. Providing you’re carrying some fuel, this drill can be spun and used to rip apart roaming splicers – Rapture’s Adam-addicted crazies.

Use of plasmid powers is very similar to how it was in the original game. Obtaining new plasmids requires Adam, a substance found in sea slugs, and grown inside the stomachs of young girls. Throughout BioShock 2 you’ll be able to exchange Adam for new plasmids, but to use them you’ll have to be stocked up with Eve, found in needles scattered around the city. Adam can also be used to upgrade your plasmids, giving them extra abilities (such as chain attacking enemies and shooting out icicles), while gene tonics grant you bonuses like increased speed and an electrical discharge when attacked.

Your drill isn’t the only weapon available to you, with shotguns, machine guns, rivet guns, rocket launchers, dart guns and more all options once you find them. As with plasmids, all of these are upgradeable, not through a currency, but at upgrade stations located at special locations in the city. Each station can only be used once, and with each weapon having three upgrades, what you choose will shape how you tackle combat in the game. For example, your shotgun will gain the ability to shock enemies once fully upgraded, but you might prefer to use a station to improve the power of one of your other weapons. BioShock 2, far more than its predecessor, encourages you to use all your available tools.

Key to how 2K has managed to do this is the way in which enemy encounters occur. While moving about you’ll run into splicers, including some new types such as the tank-like Brute splicer, and have to contend with security cameras and turrets, but at certain points you’ll set up siege-like scenarios. When you come across little sisters you’re able to harvest them or adopt them. Harvesting will instantly give you some Adam, but adopt and they can be used to get you a lot more – and more Adam means better plasmid abilities. Certain splicers can be drained by the little girls, but doing so will draw all splicers to that location, forcing you to defend her while she works away with her needle.

This mechanic adds a new element to BioShock’s gameplay. Rather than just setting her down and hoping for the best, it pays to prepare the area, laying traps with your rivet gun, placing proximity mines, setting up turrets, and stocking up on eve hypos and health kits. Once you’ve set the place up like Fort Knox it’s time to think about your mode of attack. With your little sister out in the open the splicers start to arrive, but clever use of plasmids such as Hypnosis (turning your enemies against their evil allies) will give you the upper hand. These fights eclipse anything seen in the original and promote smart thinking over Rambo tactics. They’ll test your use of plasmids to its limit and no two players will approach things in exactly the same way.

On top of this, the game’s menacing new foes, the big sisters, make regular appearances when you save the little sisters. It pays to make sure you’re ready for these encounters, too, with her fast attacks being far more deadly than those of the more lumbering standard big daddies. When one appears it’s a heart-stopping moment, panic starting to set in the instant the screen shakes and a scream pierces your ear drums. Rapture won’t be as creepy on your second visit (despite the new locations), and the splicers shock less this time around, but it’s still a terrifying game that will get your heart pounding.

Gladly the game manages to sustain its pace throughout and doesn’t come a cropper to a dumb ending, that for many tarnished the original. There are some spectacular set-pieces along the way, the odd moral choice to make and a few twists, but the story isn’t as interesting or clever as that of the first game. It’s not a bad plot by any stretch of the imagination, but it simply doesn’t spark the same reaction as the one that featured Andrew Ryan and co. In the end BioShock 2 is a game with much improved combat, and more memorable confrontations, rather than standout characters and plot twists.

Back in 2007 the water-ravaged city of Rapture looked amazing. Today, its style and design still impresses, but the Unreal powered visuals are starting to show their age. The water still looks great (although the barely worth mentioning underwater sequences aren’t a highlight), but the enemies are quite rough (not in an intentionally grim way) and a few of the effects – notably ice and spilt gasoline – are quite dated and fake looking. No such complaints can be levelled at the audio work, with the soundtrack and voice acting (heard in face to face encounters and in numerous audio logs) being a class above most of the competition.

Token multiplayer modes are barely worth the space given to them on the back of the box. With gamers knowing what they like (Modern Warfare 2, mainly) it often just doesn’t seem worth the effort to put together a lacklustre online deathmatch mode. Having been fully prepared for the same with BioShock 2, it’s with great surprise that I say, what 2K and multiplayer dev Digital Extremes has done here is really rather excellent. With a levelling up system similar to that found in (you guessed it) Modern Warfare, you’ll gradually get access to better weapons, plasmids and tonics, all of which let you customise your character as you see fit. With the multiplayer mode set some years before the original game, there’s even a smattering of story told through playing online, which will give hardcore fans another reason to invest time. It must be said that I’ve only tested the Xbox 360 version online during the course of four hours of play time, but with team and standard solo game types on offer, BioShock 2’s multiplayer certainly seems to offer something worth sinking your teeth into.

In many ways BioShock 2 is a game about refinements, rather than wholesale changes. Combat is better, thanks to the dual wielding, better enemy variety and larger scale encounters; hacking has been simplified, now making use of a timing-based button pressing mechanic that fits far better than the tubes seen in the previous game; and replay value has been enhanced by the sheer number of ways you can customise your character through use of Adam and upgrade stations. The game’s finale appears to have benefited from the criticism levelled at the first game, and there’s even a far better than expected multiplayer mode; one that is more likely to keep you away from Modern Warfare 2 than almost every other multiplayer FPS released in the last six months, simply because it’s something a bit different. If 2K had managed to tell a story that equalled or bettered that found in the original, we’d have been left with an unquestionably better experience, rather than just a more exciting, smarter shooter.

In many ways BioShock 2 is a game about refinements, rather than wholesale changes. Combat is better, but the game's story doesn't match that found in the original.
9 Multiplayer is surprisingly good Combat is deeper Battles are larger in scale Plot isn't as clever as that in the first game