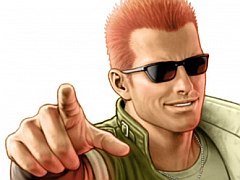 The original NES version of Bionic Commando is regarded by many platformer fans as being one of the finest examples in the genre: a frantic, ever-challenging shooter that blows raspberries at convention by scrapping the hero’s ability to jump. Rather than leaping about, the players must use their grappling-hook arm to swing from ledge to ledge. It’s a setup that requires expert timing to master, resulting in situations that can push even the most hardcore gamers to the limits of their concentration and patience.

While Capcom and GRIN are busy working on a “proper” next-generation follow-up, the pair have also found time to produce Bionic Commando: Rearmed – a complete remake of the beloved original that retains the same map structure and mechanics, but adds some really rather sexy 2.5D graphics. In addition to the souped-up version of the main game, which can now be played in offline co-op, 800 Microsoft Points (not yet released on PlayStation Network in Europe) also fetch you a newly-created set of challenge levels, and a multiplayer mode offering deathmatch and a slew of other options.

All in all, it’s a massively comprehensive package. One can’t help but wonder if Capcom has shot itself in the foot, since there’s a real danger that this will now be regarded as the definitive Bionic Commando game, overshadowing next year’s release. That’s certainly likely to be the reaction of purists – and make no mistake, Rearmed is squarely targeted at people who know and love the original. The buzz for this title on forums across the web will no doubt attract the attention of newcomers to the series, but unless they’ve been honing their hardcore platform skills there will be tears before bedtime. This game takes no prisoners – it stamps on weakness like a malicious child who’s found an unfortunate snail.

Apart from the graphical overhaul, the main change from the original Bionic Commando is that the central character, Nathan Spencer, can now survive more than a single hit. Your enemies also require several blasts to dispatch, steering the game away from the Metal Slug-alike, one-hit kills that veterans will remember from years gone by (by which we refer to gaming veterans, rather than people who participated in real wars. They may also remember one-hit kills, but that’s a far more serious matter). The game is also charitable enough to give you an infinite number of continues, although you’ll still need to scrape through each multi-stage level on just three lives.

While these concessions make life slightly easier – and we do mean slightly – hardcore platform action is still the order of day. As previously mentioned, Spencer can’t jump but instead hurls himself around by firing his grappling arm above him, directly forward or at a diagonal angle. Latching onto a platform allows him to winch himself up to a higher level, or to swing through the air in an arc. When the terrain gets more complicated, Spencer can combine a chain of these moves to traverse wide gaps and to navigate overhanging obstacles that would otherwise block his way. These moves are easier said than done, demanding a precise aim and a level of reflex control that would put Bruce Lee to shame.

Your main arsenal consists of the usual shooter shtick – pistol, shotgun, grenades – with each level adding new options to your armoury. You can also use your grappling arm to pick up barrels and other objects, which can then be used as shields or as weapons. Another departure from the first game is that this tactic now comes into play during boss fights: one early example forces you to knock a hovering robot onto its back using hurled oil drums, allowing you to blast seven shades out of its only weak point. It’s a smart addition that is typical of Capcom’s “if it ain’t broke, don’t fix it,” approach to the remake. The only inclusion that truly annoys is the somewhat pointless inclusion of the occasional puzzle-based mini-game, for hacking enemy systems. These take the form of some basic 3D puzzle-solving exercises; they’re tedious and stand out like a sore thumb.

When all is said and done, these minor gameplay changes are not the main draw of Rearmed. The point of this release is to revisit the past and to give it a brand new look – and what a look it is. It’s little exaggeration to say that fans will be left drooling over the shiny new art style that GRIN has brought to the party. Spencer and his adversaries have been given beautifully rendered 3D models that resemble Action Man toys brought to life, while the use of rag doll physics adds a whole new level of buttery pleasure: slain enemies don’t fade away, they slump and fall off the screen. For some reason, this is enormously satisfying – the first time you bowl over a group of bad guys with a barrel, you’ll want to whoop out loud. We’ve also got to give “mad props” to GRIN’s use of neon lighting, a touch that harks back to 80s arcade titles while still giving the game a strong, modern sheen. The music is pretty awesome too, resurrecting the original tunes through the sound of contemporary electronica.

This old-yet-new vibe extends to the game’s cut scenes, which are presented in a thoroughly tongue-in-cheek manner. Hacking into the enemy’s communication lines allows the player to eavesdrop on inane conversations where soldiers discuss the weakpoints of the end-of-level boss in l33t speak. These moments of self-aware humour are rather likable, adding to the sense that the developers are sharing something with the player: a love for a bygone era of gaming, a time when it was okay for games to be rock hard and have nonsensical plots – a time when the challenge was king.

In recognition of this, GRIN has included a series of standalone rooms, in the manner of Metal Gear Solid’s VR content. These take the form of timed assault course-style levels that force players to think their way around problems while stretching their grappling skills. A decent performance here could result in your name being glorified on the game’s online leaderboard. This sort of competition is the kind of stuff that hardcore players live for, so if Rearmed sells well we wouldn’t be surprised to see this mode really take off. It’s certainly likely to hold attention for longer than the Smash Brothers-style battles that make up the multiplayer options – although these too are good fun in short bursts.

Bionic Commando Rearmed is not a release for everyone. Less experienced gamers can lower the difficulty level, but doing this covers the harder jumps with transparent blocks. Yes, this makes the game easier, but it’s also strangely embarrassing – it feels like you’ve been handed a set of arm bands. In any case, doing this defeats the point: it’s supposed to be hard, and you’re supposed to like it. If you’re short on patience or have a nervous disorder, then you should approach Rearmed with caution. If, however, you love the genre and harbor fond memories of the original, then this game will seem like a gift from the Eighties God of Shooty Bang-Bang. You may be slightly narked by the fact that you can’t play co-op online, but hey – that wouldn’t be very retro, would it?

This game takes no prisoners - it stamps on weakness like a malicious child who's found an unfortunate snail.
9 A loving recreation of a gaming classic Ooh, doesn't it look good? Great background music Very, very hard. Newcomers beware.

Bionic Commando Rearmed sees a return of the intense 2D side scrolling,…

Bionic Commando Rearmed sees a return of the intense 2D side scrolling,…