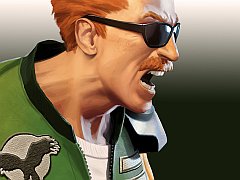 Your reaction to Bionic Commando Rearmed 2 will largely depend on your sensibilities as a gamer. If you’re the kind of person who misses the good ol’ days of 2D side-scrolling, precision platforming, and levels so large that you can get lost in them, you’ll find a lot to enjoy here. Conversely, if you generally prefer modern game design – and the easy-access, hand-holding philosophy that tends to go with it – you may struggle to see the appeal.

The first Rearmed was a remake of the demanding 1988 NES game, Bionic Commando, which in turn was loosely based upon a Capcom arcade title of the same name. Rearmed was an unabashed exercise in nostalgia, and while both the graphics and the original soundtrack were given a contemporary makeover, the overall package was very familiar to anyone who blasted through the source material in the days of Glasnost and chunky grey game carts. It was quite a bargain at 800 MS points (or £7.99 on PSN), not that this ultimately helped developer GRIN: the Swedish studio went bust in 2009, following the relative failure of their “proper” next-gen Bionic Commando.

I’ve included this brief history lesson to illustrate the problem that Fatshark – a studio home to several GRIN refugees – faced with Rearmed 2. Once again the studio is playing upon gamers’ misty-eyed fondness for the ’80s (perhaps the unremembered ’80s, in some cases), but this time around there’s no original game to bounce off. GRIN’s 2008 effort had a pre-determined set of classic levels to follow; any departure from the established path would risk incurring the wrath of the fanbase. In this sequel, the developers have room to experiment. So, what do we want – more of the same, or something that combines its retro values with the benefits of modern thinking?

In the end Rearmed 2 ends up dithering between these two totems, but it’s still rather fun, and that’s arguably all that matters. Aside from granting Nathan Spencer the ability to jump – a significant change that we’ll discuss in a moment – most of Fatshark’s additions take the form of whimsical (read: shallow) bells and whistles. Where the last game featured a sizeable database of every foe, item and environmental hazard, here we find a daft scanning ability that lets you pause the action and highlight objects you want to learn about. If you reach a barrier, a quick scan will tell what weapon you need to blow it away; in boss fights, it’ll directly show you where their Achilles Heel lies. While occasionally useful, this trick largely comes across as lazy design, as if Fatshark couldn’t think of a better way to convey information to the player. With a game like this you don’t want to be sitting around reading boxes – you want to be swinging about, blowing things up.

To assist with the latter demand, the developers have thrown in the occasional moment where Spencer can pilot a helicopter, or take command of a sniper post. The chopper allows for a spot of brain-free blasting, while the sniping lets you scroll around the level with a free-floating reticule, picking off foes with relative impunity. Both activities are quite fun the first time you sample them, but they’re little more than brief distractions, and superficial ones at that. Thankfully the on-foot action is as satisfying as it was in the last game, allowing Spencer to obliterate the opposing force with a selection of meaty armaments. It’s simple spam-the-trigger stuff, but all the more enjoyable for it – especially when you’re throwing barrels to bowl over yet another disposable henchman. Each weapon can be upgraded twice via hidden pick-ups, while two further sets of perks grant Spencer a spread of active and passive abilities – like regenerating health and a mechanical uppercut.

As gratifying as this collective arsenal may be, there’s no doubt that Rearmed 2 is at its best when you’re swinging through the air on your mechanical arm. While the original grapple controls have been tweaked slightly, it doesn’t take long before you’re nipping about with acrobatic flair. There’s a lot to take in – diagonal, horizontal and vertical arm-thrusts, plus a handful of manoeuvres for covering precise distances – and as with the last game, timing is of the essence if you’re attempting anything even vaguely showy. Despite its puny nature, Spencer’s newfound ability to jump makes things a lot easier, not least because you can now clamber over waist-high obstacles. Hardcore fans may lament this switch, but upon finishing the story you can unlock a retro mode that reverts Spencer to his former Woody Harrelson-like status. If you complete a level without jumping the game’s map screen will acknowledge your efforts, but since it seems like a major hassle to pull off this feat I suspect only purists will bother.

While the comparative drop in difficulty certainly impacts on Rearmed’s unique character, there’s still something quite rewarding about its focus on skilful aerial gymnastics. There’s no doubt that the gameplay can be fiddly at times, and on the larger stages it’s occasionally possible to lose your bearings. Rearmed 2 isn’t a hard game, but its old-school values may give you a rough ride if you’re not ready for them. Personally, I love the fact that the levels are so sizeable, offering multiple paths and collectibles for players who explore every nook and cranny. You’ll have to revisit stages several times if you want to find everything, and even then there’s the potential for speed runs and the like.

Naturally, you’ll only be bothered about attempting this if the game strikes a chord with you, and as I said up top, that’ll largely depend on personal preference. There’s nothing big or clever here (Well, there are a few big things – the giant robot gorilla bosses spring to mind – but I still wouldn’t say they were particularly clever). The 2.5D graphics look nice enough, aside from the odd glitch or slowdown, but the soundtrack is excellent: all the sound effects are suitably blammy, while the background music is laced with a particularly infectious mix of dubstep and electronica. Rearmed 1 composer Simon Viklund is responsible for at least some of these gems, and there are also some slick remixes of his work from the 2008 game.

All the same, it’s hard to escape the feeling that Rearmed 2 can’t quite match the quality of its predecessor. The price-tag may have swollen by 50 per cent, but in all other areas it’s a slightly less impressive product. The main story mode is lengthy enough, but it repeats itself a little too often, and while it’s great that Fatshark has also brought back the teeth-grindingly hard Challenge Rooms, there are only 24 of the buggers. Local co-op is happily anarchic, but there’s no support for online play – a serious omission, in this day and age.

That says it all, really. The first Rearmed didn’t have much competition, but it still stood out as a quality release; by contrast, this sequel feels overshadowed by the stronger experiences that the LIVE Marketplace and PSN have to offer. Even so, if you’re hungry for an old-fashioned platformer, one with a tongue in its cheek and a spring in its step, you could do far worse.

If you're hungry for an old-fashioned platformer, one with a tongue in its cheek and a spring in its step, you could do far worse.
7 Loads of secrets to uncover Swing mechanics are still fun Excellent soundtrack Feels solid, rather than exceptional.