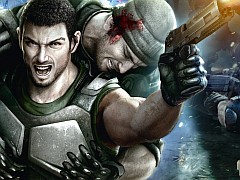 Binary Domain’s narrative is dominated by conflict. There’s the central battle between humans and robots in a future Tokyo; there’s the fish-out-of-water unease of this group of western soldiers entering foreign territory; there’s even ideological debate between the British and American members of this clandestine cabal sent to arrest a genius scientist making ‘hollow children’, self-aware robots that are convincingly human.

But the most significant culture clash is the one between East and West. Binary Domain might be a game developed in Japan, but with its cover-based shooting, linear story-driven campaign and online multiplayer modes, its production has clearly been shaped with an eye on the larger overseas market. It’s a game where you’ll pump hundreds of rounds into an enormous enemy mech, to polite encouragement from a French robot named Cain: another conflict, a moment of silliness to defuse the tension from a ferocious firefight.

And they are ferocious. We’re often told that shooting humans is more psychologically satisfying than any other enemy, but Toshihiro Nagoshi and crew do their best to prove otherwise. The robots – and there’s a pleasing variety here, from surprisingly hardy grunts to slow-moving heavy gunners and nimble snipers – are relentless, advancing with the red eyes and eerie calm of a Terminator. The faster ones will dart in and out of cover, peeking around to loose off a few rounds. As you hit them, their carapaces gradually crumble, revealing their glowing innards. It’s satisfying to finish off such a satisfyingly reactive foe; more so than many of the human enemies I’ve sent ragdolling to their deaths in recent years.

Meanwhile, the guns have a real kick – literally. Protagonist Dan’s assault rifle suffers from heavy recoil, forcing you to shoot in sharp bursts, though it’s loud and meaty enough to be a reliable mainstay, which is handy as it’s the only weapon you can upgrade. The sniper rifle is probably the pick of the support weapons, though the wonderfully noisy SMG is a personal favourite. An infinite-ammo pistol is something of a last resort, while the shotgun isn’t worth bothering with, bar one stage where you face the equivalent of robot zombies in close quarters.

That rather unnerving sequence is one of many set-pieces that propel the narrative, particularly in the middle third where the thematic elements of the story give way to non-stop action in what amounts to a series of chases punctuated by the occasional combat bowl. It moves at a hell of a lick, particularly during a stretch where it seems you’re battling a new boss every fifteen minutes, but it gives itself a little too much to do in the closing chapters, where some story strands are wrapped up too neatly and others end up over-simplified. The final chapter of this ten-hour campaign is heavy on exposition, with a real Scooby Doo moment as the antagonist describes his cunning masterplan.

It’s a shame, because early cutscenes set the tone for a tale that has something to say about the nature of playing god and what it means to be human – not to mention dabbling in issues of race – but too often it pulls its punches. You sense that Nagoshi is holding back a little, tempering his traditional storytelling approach thanks to commercial considerations. Some will be pleased that his Yakuza excesses have been curbed, but you sense that Binary Domain is often most interesting in its longueurs; the action is reliably solid, and occasionally spectacular, but it’s in its quieter moments where it differentiates itself.

An early cutscene, involving the brutal suicide of a hollow child, is properly disturbing. There aren’t quite enough moments like that, even if the action highlights – like a high-speed pursuit involving a mech that transforms into a giant motorbike – provide plenty of heart-in-mouth excitement to compensate. The closing stretch sees Nagoshi throw in a couple of plot surprises (even if one is clearly telegraphed) while a pleasingly ambiguous ending is followed by a disarmingly sentimental coda that will cause as many wide smiles as rolled eyes.

The real missed opportunity, however, is in the relationship mechanic, where your words can have a positive or negative effect on your team-mates. In the rare quiet moments, your allies will ask questions, and you get the opportunity to offer a vocal response via a headset, or to pick one of three or four preset replies via the left trigger. Answering in a manner that pleases your friend will raise their trust meter, a behavioural adjuster designed to affect team dynamics in battle. If the trust level is high, they’re more likely to respond quickly and accurate to your barked instructions, though consistently negative comments and poorly-chosen instructions during a skirmish and they’ll ignore orders.

It’s a neat idea in theory, and the voice recognition is fine, but in truth you’re better off simply leading by example. Take charge of a combat situation, pull off a few headshots, and everyone’s opinion of you will improve regardless of whether you insulted them beforehand. Your decisions don’t affect the story in any meaningful way, either: while you can choose the make-up of your squad when you need to split up, you’ll merely get a few new lines of dialogue and a slightly different cutscene or two. Given that one late-game reveal throws up a particularly thorny moral dilemma, it’s a real pity that your decisions don’t carry more narrative weight. This is a binary domain with ones but no zeroes.

Then there’s the contractual obligation of the online component. Though Japan has brought us some of the best and most inventive multiplayer modes in recent years with Monster Hunter and Dark Souls, they’re not really an eastern speciality, and that’s evident here. Leaving a game can be more trouble than it’s worth when multiple players try to quit and hosting is transferred from one to the next, forcing you to wait until a suitable host is found. Otherwise, there’s nothing particularly wrong with the seven team deathmatch, domination and capture the flag variants: character classes, purchaseable perks and levelling systems are all present and correct, and the stages are varied and visually interesting. Invasion, meanwhile, is Binary Domain’s very own Horde mode, an entertaining and surprisingly challenging aside thanks to the relative paucity of ammo that nevertheless stands little chance of supplanting its inspiration.

Even so, these clashes between East and West cause more than enough sparks to make Binary Domain one of the most interesting culture shocks in a long time. It’s redolent of the late Dreamcast/early PS2 era, when games were edgier and more interesting, before they were focus-tested into oblivion. While there’s evidence that some of the sharper edges have been sanded off here, it’s the unusual blend of western polish and Japanese creativity that makes Binary Domain so fascinating. If it represents a tentative toe-dip into uncharted waters for Nagoshi and Sega, here’s hoping they wade in with both feet next time.

Is this a case of robot love, or is Sega's shooter best left on the scrapheap?
8 Crunchy combat with entertaining electronic enemies The campaign sustains a thrillingly fast pace A few frame-rate drops on the bigger boss fights Multiplayer and trust systems aren't all they could be