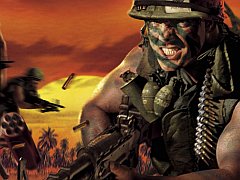 The briefing screen to Phu Bai Valley, one of Battlefield: Bad Company 2 Vietnam’s five new maps, informs that the all-important mission objective is for US forces to stop NVA rice shipments. There’s even a liberal sprinkling of propaganda, as the American announcer declares that these actions won’t damage the food supplies of the civilian population. Ha!

Of course, Bad Company 2 – Vietnam or no Vietnam – is really about you and a bevy of mates running around like headless chickens trying to blow up various M-COM stations. Or not blow up, as the case may be. But it’s Nam, baby! So now you’re thundering over levels in a sparkly new (old) Huey, with Creedence Clearwater Revival’s Fortunate Son (the current de facto choice to represent the Vietnam War in any video game) blasting out, but you’re still complaining that your mate Dave is doing an absolute crap job on the turret.

Bad Company 2: Vietnam tows the middle-line between a DLC map pack and a full-blown expansion, adding five maps, new weapons and vehicles, and an entire aesthetic do-over for the princely sum of 1200 Microsoft Points/£9.99 on PSN. In our current climate of being nickel and dimed for any scrap of bonus content, it’s a refreshing change for consumers to be getting so much for so little. Or maybe it’s just DICE seeking redemption after demanding 480 MSP for some trumped-up palette swaps – we’ll simply never know.

As far as the jungle shift affects the rhythm of play, Vietnam’s five maps are generally packed with noticeably denser areas than Bad Company 2’s finest. Vietnam competently works its lush, verdant environments, but DICE is also consciously crafting an entirely different action-packed mood to other, equally green Bad Company 2 levels such as Valpariso and Oasis. Vietnam thus demands a slight adjustment to common tactics, and a slight boost to weapon damage makes you prioritise assault rifles and the new flamethrower over the game’s selection of SMG’s (it’s a lot harder to play engineer in general) and shotguns. It’s not a radical repositioning of tactics, mind – shooting enemies in the face still gets the job done.

One major source of disappointment, across all five maps, is in the lack of Bad Company’s signature destruction. Ducking down behind an impenetrable wood shack feels oddly bizarre after becoming accustomed to Bad Company 2’s perilous environments, and while the solid structures help keep firefights action-packed it does feel like an unwanted departure from one of the series’ finest accomplishments.

15 weapons are provided, though most of these are re-skinned variants of established Bad Company 2 weapons. The Vietnam M60 handles exactly like the Bad Company 2 M60, despite minor changes, though each weapon now sports a fashionably dirty look. Barrels are wrapped with soggy, dirty tape and guns sport custom paintjobs underneath their thick coatings of grime. It is all 100 per cent how I imagine the Vietnam War was actually like after watching Good Morning Vietnam, The Deer Hunter and Apocalypse Now.

To evoke the same sensation as being in one of those scenes from the movies, a playlist of 40-odd songs is included to blast out of the new vehicles, namely the M48 Patton and the aforementioned Huey. While there’s (allegedly) a raft of tiny changes to the vehicles, these must be so small they’re barely noticeable – the nuts and bolts handle the same as ever before, albeit with the inspired decision to include a full Vietnam-era soundtrack to the game.

Kit tweaks and smaller maps mean the sniper generally gets the short end of the stick, and very few areas come with any ideal vantage points to set up camp. To compensate, only snipers get any access to scoped weaponry – red dot sights are gone entirely, as are 4x and spotting scopes, meaning everyone else is forced back to the prehistoric (about 2005-06) times of playing a multiplayer shooter solely with simple iron sights.

As a way to extend the life of Bad Company 2, Vietnam does a sterling job of refreshing the formula almost a year after the original game. Its lean emphasis on close-quarters action and particularly generous helping of five maps ensures there’s plenty to do, though there’s always the possibility that you (or your group) might have moved on to one of the many other shooters that have come out since.

The overall impressions are much the same. This isn’t a dramatic reinvention of Bad Company 2, though I doubt anybody would want it to be. At the same time, none of the maps deliver the same kind of awe as the base game’s highlights. Port Valdez, for instance, is still riddled with frequently incredible moments a year later and must surely be destined to become a fan favourite. Running over freshly scorched earth in Hill 137 is always amazing, but the overall sum of Vietnam’s parts, while entertaining in their own right, don’t ever quite match up to the pre-existing levels.

Another area where DICE lets itself down is in actually incentivising players to (re)invest, however. The 360 version often feels somewhat sparsely populated, though the PC version is teeming with life – I assume there’s some sort of mix up there, though, as I’m repeatedly being told PC gaming is dead. As such a clean and tidy standalone package that burrows into its own sub-menu from Bad Company 2’s main screen, there’s very little collusion between this and the base game other than adding further XP to your (probably already quite high) level.

The fifth map, Operation Hastings, was supposed to be the big draw to get people playing – unlocking for each platform after its players achieved 69 million team actions, but DICE relented and made it available early in 2011 after PS3 and 360 players barely accomplished more than half. One area DICE could possibly consider looking into would be the Double XP weekends, which always seems to work wonders for Activision and Microsoft.

Ultimately, while it might not match some of the highs of its base game, it’s a real shame that such a generous and competent addition to Bad Company 2 might fall by the wayside – especially with Black Ops’ first chunk of DLC looming ominously on the horizon.

Vietnam isn't a dramatic reinvention of Bad Company 2, though I doubt anybody would want it to be.
8 More Bad Company 2. Great value for money. Less emphasis on destruction. Not as popular as it should be.

Fighting as either U.S. Marines or North Vietnamese Army (NVA), the hostile…

Fighting as either U.S. Marines or North Vietnamese Army (NVA), the hostile…