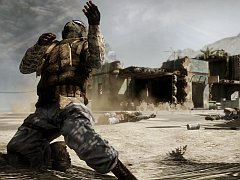 It’s no secret that EA wants its own Modern Warfare, but in recent years the mega publisher has struggled to put together a game that can shift units in numbers even approaching what Activision’s series has. In DICE, the Swedish studio behind the Battlefield series, EA has a development team more than up to the job, and its latest effort, Battlefield: Bad Company 2, is without a doubt the best modern combat FPS the publisher has ever produced. If you’ve been wondering what game could possibly take players away from online MW2, look no further.

2008’s Bad Company did a lot right. It featured some great open environments, impressive production values and a tight, if somewhat limited multiplayer mode. It didn’t quite feel like the complete package, though, with the campaign at times feeling like an afterthought and the multiplayer severely lacking game modes. This sequel, which once again follows the four-man Bad Company unit, builds on its predecessor all across the board, delivering an excellent single-player campaign, incredible audio and visual work, and a multiplayer component that is top of its class.

Bad Company 2 casts you as soldier Preston Marlowe, and you’re joined by the other three members of Bad Company that fought alongside you in the first game. The story, which follows you as you try to recover a deadly WMD before the Russians get their hands on it, takes you from tropical jungles and baking hot deserts, to frozen villages and wide open countryside. The guys in the team are likable enough, and there’s an attempt to build up some kind of camaraderie, but it’s hard to see them as real people. The frequent one-liners are occasionally amusing, but often jar against the non-stop violence.

So what’s changed here to make the campaign a more essential experience than that in the original game? Levels remain largely quite open, but there’s definitely been some attention paid to tunnelling you through to make sure you don’t wander about aimlessly. Gone is the re-spawn and health pack system of the first game (which made the campaign feel too similar to a multiplayer match), replaced with more standard checkpoints and recharging health. In comes mid-mission weapons load-out changing (via supply crates), less twitchy aiming (which made targeting enemies quite awkward in the original game) and an onslaught of memorable battles.

While the original game featured plenty of action, it didn’t come close to the frequent chaos that this sequel bombards you with. Time and time again you’ll be facing off against enemy troops, heavily outnumbered, with buildings blowing up all around you, attack gunships in the air and RPGs narrowly missing your face. In terms of set pieces, Bad Company 2 doesn’t reach Modern Warfare levels, but it feels less scripted as a result – not that there aren’t some stunning moments scattered throughout the campaign.

No Battlefield game would be complete without vehicles to drive, and Bad Company 2 features plenty. You don’t always get to take full control, with the chopper sections limited to on-rails shooting, but these sequences are always hugely exciting. One chase sequence in which you’re driving a Jeep while also firing rounds off at pursuing enemies is a real highlight, while simply bombing across an undulating desert is fun in of itself. There is an annoying tank sequence mid-way through the campaign that fails to be even remotely fun, but on the whole the vehicles are handled very well, with DICE wisely choosing to put you in the passenger’s seat from time to time.

Destruction more or less defined the original Bad Company, and even though THQ’s Red Faction Guerrilla has now taken the technology to another level, blowing a hole in a building is still hugely satisfying. Buildings don’t crumble like they do in Guerrilla, but the effect of debris flying through the air after an RPG strike on an enemy hut is unquestionably impressive. It’s not all about visual flair either, with the destruction forming an essential part of your attack strategy – take out enemies by levelling buildings they’re hiding in or destroy a bridge to block their attempted attack. One particularly chilly sequence sees you running from building to building to find warmth, and an RPG to a wall will save you having to find a door.

This would count for nought if you didn’t have the right tools for the job, but thankfully there are a ton of weapons for you to get your hands on. You can only carry two at a time, along with grenades, but supply crates are dotted about fairly frequently and allow you to change your load-out. I tended to go with a scoped assault rifle along with either a sniper rifle or RPG, but the choice is yours. Your team mates will help out, but they’re hardly crack shots. While you don’t want them to take out all the enemies on their own, at times you’ll see them shooting round after round at an enemy, until you have to step in and take the shot yourself.

Depending on the difficulty level and how many collectables you go after, the 13-level campaign will take anywhere from six to 10 hours to complete. It doesn’t feel short, but it’s not an epic adventure either. The end credits aren’t the end of the game, though, with the multiplayer component likely to be where most gamers will get their money’s worth. With four game modes, 10 maps (as long as you enter a VIP code), a maximum of 24 players, squad mechanics, weapon and player ranking, four classes and individual specialisations, this is a multiplayer experience that rivals that in Modern Warfare 2.

Rush, the attack or defend game mode seen in the original Bad Company, returns, but is joined by Conquest, another large-scale game type. Whereas Rush features a number of crates that need to be detonated (with you either working to blow them up or to stop the opposition from doing so), Conquest is all about controlling territory. Both these game modes allow for the maximum 24 players and are the best if you want to use vehicles such as the tanks and choppers. While 12-player teams might seem daunting for some, the new squad mechanic means you can join up with three other players and work together, even spawning into squad mate locations.

More immediately playable are the Squad Deathmatch and Squad Rush game types. In Deathmatch up to four squads of four players compete against each other to try and reach the designated kill count first, while Squad Rush is a smaller scale 4 vs. 4 mode with the same attack and defend mechanic seen in the original Rush setup. If you want a different experience the Hardcore mode might be worth a look, but it’s not for the feint hearted. Without cross-hairs, regenerating health, enemy icons and the ammo counter, Hardcore play is for the upper echelon only.

With the now essential ranking and awards system that Modern Warfare popularised, there’s every chance you’ll become hopelessly addicted to Bad Company 2’s multiplayer mode. You’ll probably need to put in at least 10 hours of play time just to get an idea of your favourite character class, with Medic, Assault, Recon and Engineer all having their good and bad qualities. Being a simpleton I went for assault most of the time, but players who use the support classes will level up quicker if they do their job well.

Tying together the whole package are some incredible production values. Audio work here is just as good, if not better, than it was in the already superb sounding original, and the visuals are at times genre leading. With huge draw distances, great destruction effects and top class lighting, the game world feels real. In the middle of combat you’ll feel in real danger, the sense of being pinned down being greater here than in any other FPS I’ve ever played. What makes the visual splendour so much more impressive is the size of the levels. Bad Company 2 is a stunning game, one of the best of this console generation and only bettered by the likes of Crysis and Killzone 2.

Do you like first-person shooters? If the answer is yes, buy Battlefield: Bad Company 2. If there’s a weakness it lies in the slightly brief single-player campaign, but the brilliant, potentially Modern Warfare 2 beating multiplayer more than picks up the slack. EA might be looking at its forthcoming Medal of Honor to get a Modern Warfare sized mega hit, but Bad Company 2 deserves good things too.

Do you like first-person shooters? If the answer is yes, buy Battlefield: Bad Company 2. EA might be looking at Medal of Honor to get a Modern Warfare sized hit, but BC2 deserves good things too.
9 Multiplayer is brilliant Genre leading production values Thrilling campaign Campaign could be longer