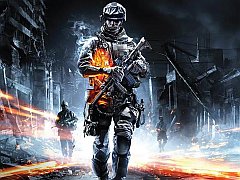 EA is at war. Everybody knows this, of course, as an unrelenting year of hype and a multi-squillion marketing budget has made sure of that.

Like all wars, it’s the people caught in the crossfire who suffer most – and in this instance that’s the player. Battlefield 3 is often a giddying experience, but as an overall package it’s marred by an insistence on some very unsavoury additions. Instead of focusing on what makes Battlefield such an iconic experience and refining it further, DICE became obsessed with its pursuit of Call of Duty and devoted time and resources into an unsatisfying campaign, the frankly needless addition of team deathmatch, and a woeful co-op mode.

It should tell you all you need to know that DICE has titled the multiplayer DVD as disc one. This is with good reason, as when you hit your stride in multiplayer Battlefield 3 is simply phenomenal – it’s an incredibly satisfying experience unlike anything else on the market, and in these wonderful moments of bliss the game’s myriad problems simply fade away. The requirements for this giddy happiness might be too high for many, however, as I would say you need at least a full squad of you and three other friends to really get the most out of your time.

There is also the rigmarole of a lengthy initiation process players will have to endure. Your basic equipment lacks any attachments, and you’ll need to be playing for a few hours before you’re able to properly customise your loadout in any meaningful way. The breadcrumb trail is widely spaced, and while there is plenty to unlock across the game’s four classes you’ll have to invest plenty of time to get access to it all.

You’ll find yourself, for the most part, fighting at longer ranges than Bad Company 2 or Call of Duty, meaning bullets have to be fired in the most precise bursts seen since Counter-Strike, and a basic scope will be an absolute necessity for many. The weapons themselves have a fierce kick, wide bullet spread, and the game takes a good long while to look down the sights of your rifles.

Four classes are offered to accommodate a variety of tactical styles, with Battlefield 3’s most significant roster change coming from its decision to blend the Medic’s resuscitating abilities into the aggressive Assault class – which makes perfect sense, seeing as the Medic in Bad Company 2 was a frontline killing machine.

Also making a return from Battlefield 2 is the Support class, who lugs a machine gun and can be absolutely devastating when used to disrupt cheeky snipers and suppress enemies behind cover. This new mechanic causes the screen of players to blur when exposed to nearby fire, which can completely disrupt both attacking and defending teams when used in combination with a competent flanking force.

Combine this with the laser sight and flashlight attachments, which can be used to completely blind players – including your own team – at close range. A pair of charging attackers can obliterate an encamped group of defenders with judicious use of these attachments.

The Recon class will also be delighted to hear that going prone has returned to the series after being omitted in both Bad Company games – turning faraway snipers into single-pixel dots lingering on the horizon. This will ultimately frustrate as much as it delights, the invigorating sensation of dropping to the ground to avoid enemy fire balanced out by the teeth-grinding agony of repeated obliteration at the hands of invisible snipers.

Engineers might be concerned by the overall scarcity of vehicles for them to defend or destroy, but the class is more important than ever for ensuring the team’s expensive military hardware isn’t promptly smashed to pieces. A new damage model for vehicles allows them to automatically recover from low-level damage but to constantly bleed health when under a more sustained attack, requiring a nearby Engineer to stop these from becoming expensive write-offs.

DICE has chosen a traditional outfit of vehicles, ranging from tanks and buggies to helicopters and jets. Much has been made of the inclusion of the latter, though most players will be completely unable to effectively use them because of their terrifying speed, but you can expect to be frantically running for your life in a couple of months when the air-fit minority have mastered the craft.

Battlefield has always been a compulsive multiplayer experience because it offers an incredibly broad suite of options and objectives for players of all talents and ability. While being able to fire in a straight line is always a neat skill to have, players who don’t fancy themselves as expert marksmen can still become invaluable members of the team thanks to a wide, and absolutely vital, range of supporting roles.

Tactical players can turn matches without firing a single round, identifying enemy positions and exploiting the weaknesses of trigger-happy enemies with steely patience and opportunistic objective runs. Matches can easily become lengthy wars of attrition, and the heart-pounding exhilaration of snatching a victory because half the enemy team got cocky and ran off to score some easy kills is virtually unmatched in gaming.

Five modes are available, but only the large-scale objective-based skirmishes of Rush and Conquest are worth playing – play on team deathmatch and the game is stripped of its scope and scale to become a bland and inferior Call of Duty imitation, and the four-versus-four player limit of Squad Rush and Squad Deathmatch make the massive environments feel like uninhabited wastelands.

Nine maps are supplied on the disc, with almost all of them offering the wide, multi-faceted environments the Battlefield series has become famous for. The only bum note is Operation Metro, the one map bizarrely chosen for the game’s recent open beta. Metro is an uninspired Call of Duty knockoff, stripping out everything that makes Battlefield excel and replacing it with rote tunnels and staid linear constructions.

Like the best multiplayer games, Battlefield 3 sets a stage for you to create your own personal stories. You’ll remember that time on Caspian Border when you and a friend accidentally stumbled onto a tank while driving a buggy, and won, or that bit when the squad got lucky and managed to gun down half the enemy team as they base jumped off Damavand Peak, and these individual stories will live on for months and years in conversations down the pub or when spending lazy weekend afternoons on message boards.

It’s a shame, then, that DICE’s concentrated attempt at storytelling – a 12-level single-player campaign – falls completely flat, demanding a poignancy and emotional engagement it simply does nothing to earn.

It’s a bolt-on campaign so obsessed with military manoeuvres that you spend more time watching your marines preen and posture than actually fight in an engaging setup, with your comrades masking loading screens by barking their orders before kicking down doors. The attention to detail is nothing short of magnificent, but it’s a real shame to see the player’s role marginalised because of it.

Much of the game is shrouded in foggy night-time darkness, with DICE’s environmental artists doing an admittedly splendid job of creating a gloomy rendition of the Iraqi Kurdistan region. A squad of US marines charging over a hill in Operation Guillotine is a gripping moment, showing that DICE does have the talent at creating stunning set-piece moments – they’re just too few and far between to create an engaging campaign.

Going forward, if DICE really wants to ape the rollercoaster ride mentality of the corridor shooter then it’ll need to learn how to better disguise its seams. Move out of bounds in Battlefield 3 and you’ll be hit with an obtrusive ‘return to the combat zone’ overlay, followed by death, and fail to move in time with the script and you’ll catch glimpses of enemy troops spawning out of thin air.

One of the more significant problems is that players run around with little agency or impetus, with DICE far too busy incorporating authentic military lingo to actually worry about whether the player is being effectively orientated into the action. Yet authenticity isn’t enough, as the campaign devolves into a baffling action-movie plot with pantomime villain Solomon deciding he wants to destroy the world for a reason that is never stated.

Rounding off the package is a six mission two-player co-op mode, which is functional but never fun. Players are restricted to playing online, with no split-screen option available, and the levels involve the tactical dismantling of scripted sequences. Each level promptly becomes a particularly glitzy whack-a-mole, with enemies popping up in the exact same locations time and time again.

It’s also bloody hard, and with lengthy missions and no checkpointing you’re likely to find yourself more frustrated than incentivised. The main problem is that DICE is clearly gunning for the score-attack mentality of Modern Warfare’s Spec Ops mode, yet the end result is simply not suitable for this purpose.

Which leads to a difficult quandary: how do you grade a game such as Battlefield 3? The multiplayer mode is nothing short of essential, but at the same time it’s hard not to be sorely disappointed by everything else on show.

Battlefield 3 isn’t quite the Call of Duty killer many were wanting, then, and it’s especially jarring to view EA’s ‘above and beyond the call’ marketing brouhaha in light of the fact Battlefield 3 falls to its most damning lows when it’s trying hardest to compete with the latter.

Battlefield 3 isn't quite the Call of Duty killer many were wanting.
8 Sounds incredible Multiplayer Single-player Co-op