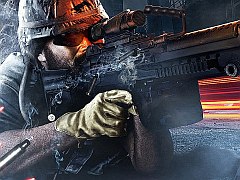 After the entertaining but unfulfilled Close Quarters, DICE is back doing what it does best – size. Everything about Armo(u)red Kill, Battlefield 3’s third DLC pack, is big. Big maps, big vehicles, big explosions, big noise. It’s the experience Battlefield veterans have been clamouring for, and a real statement that this is still the place to be for emergent, unscripted and relentlessly dramatic multiplayer action.

Unlike traditional map packs which drop new arenas into the regular rotation, DICE has chosen to treat each new expansion as almost its own game, to be played separately and deliberately. This decision made total sense with Close Quarters – it really was a completely different style of game, with different team sizes to ‘standard’ Battlefield 3 and different rule sets. Over Armored Kill’s four new maps, though, you’ll mostly be playing Rush and Conquest, which makes their segregation a little unusual.

Perhaps, then, it’s to do with Armored Kill’s most obvious new addition – the AC-130 gunship. Every one of the four colossal battlegrounds – Bandar Desert, Death Valley, Armored Shield and Alborz Mountains – features a circling gunship up above. It’s not controlled by a player, but can be used by the team in control of it to pepper the ground with devastating hellfire, or as a mobile spawn point for paratrooper drops.

In Conquest, control of the gunship is attached to a specific capture point, denoted by a little aeroplane marker. Capture point C, say, and your team will be able to use the AC-130 until you lose the point. This quickly alters the strategy and flow from a normal Conquest match, because getting hold of that gunship is vital for success. Squads will have to make sure their engineers are carrying anti-air rocket launchers, which of course means tanks are more of a threat than in vanilla Conquest. Hence the new tank-destroyer vehicles…

DICE mastered the rock, paper, scissors balance of Battlefield many years ago, and even with these new game-altering additions the game’s core rhythms never feels out of whack in Conquest. In Rush, however, the attackers are the only team to have access to the AC-130, and it respawns shortly after it’s taken down. This means the defending team constantly have to work to take it down before going back to their normal duties – namely defending. Get a couple of high level players in the gunship deploying flares, and it’s hellish; like a game of Call of Duty against world class air-assault masters.

It feels to me like Armored Kill isn’t really supposed to be played on Rush. While I still had memorable and thrilling moments with the to-and-fro nature of attacking and defending, the flow and sheer size of the maps lends itself much better to the freeform conflict of Conquest.

And, well, the maps are the stars. Picking apart individual characteristics of the quartet is largely pointless – these aren’t maps that are designed with little choke points or specific lines of sight. They’re open, organic theatres on which to immerse yourself in the carnage of Battlefield.

Of the four, I’ve enjoyed time on the enormous Bandar Desert the most so far, with its holiday-village style bungalows and palm trees overlooking the vast sandy expanses in the middle. The action quickly switches from chaotic infantry scrapping to sun-drenched tank warfare, and the constant aerial threat keeps you on your toes. Also, the relative closeness of capture points means you spend less time trudging on foot if you’re unlucky enough to find yourself back at the base with no vehicles in sight.

In fact, that is a bit of a problem with Armored Kill. Playing on Xbox 360 immediately brings choruses of derision from the PC crowd, but the past 10 months’ action hasn’t felt compromised by the smaller team sizes and lower graphical fidelity that comes with playing on console. Here, though, it does feel like every map would benefit from having at least 32 players jaunting around. Alborz Mountains, which looks like it could moonlight as a Skyrim DLC with its towering peaks and snowy outcrops, is so enormous and sparse that you can feasibly spend an entire round just looking for something to do. Walking for five minutes only to get gunshipped to oblivion isn’t particularly enjoyable.

And while the calm blue night skies of Death Valley and the greenery of Armored Shield aren’t quite as overbearingly huge, they still suffer from a lack of population. However, it has to be said that well over 75 per cent of my own time playing Armored Kill was spent in the thick of the action, sprinting between cover points, sneakily grabbing flags, leaping over hills in the new ATVs and crashing helicopters into mountains. All of that time was exciting, exhilarating and, importantly, exactly what Battlefield should be.

There’s a new mode, too, named Tank Superiority. As is often the case when straying outside Rush and Conquest, it does feel like a bit of a novelty, but it’s a first-class gimmick. The battle takes place around a single capture point – the whole mode is an offshoot of King of the Hill – with a plethora of tanks readily available for both sides. Tactics develop on the fly, as you seek out clever tank-hiding spots or dominant high ground. Being Battlefield, there’s rarely a moment without some enormous explosion or flying chunk of metal spinning past your soldier.

In my review of Close Quarters, I said that it stepped too far away from the essence of Battlefield – away from the scriptless chaos, away from the delicate balance of systems that allows drama to unfold organically and copiously. Armored Kill is the antidote. All it wants to do is wow you with its message: this is Battlefield, and we don’t play by anyone else’s rules.

There may be some balance tweaks to be done on the AC-130, and it would be nice to have these giant, spectacular arenas thrown into the regular map rotation, but those who’ve paid out for Premium subscriptions will surely not be disappointed. Armored Kill is proof that DICE is still the best in the business at crafting these colossal worlds in which to play, and it’s an expansion that makes Battlefield 3 feel vital and current once again.

Armored Kill is proof that DICE is still the best in the business at crafting these colossal worlds in which to play, and it's an expansion that makes Battlefield 3 feel vital and current once again.
8 Feels like a reward for Premium loyalty Vast, beautifully designed maps Tank Superiority is great fun Rush may need rebalancing

Armored Kill is set to include new vehicles, specifically mentioned are tanks,…

Armored Kill is set to include new vehicles, specifically mentioned are tanks,…