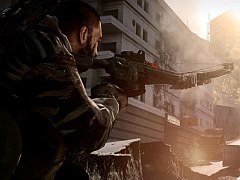 Did you forget about Battlefield? No one would blame you if you did – since the last piece of BF3 premium content landed, there’s been $1bn worth of Call Of Duty, a record-smashing return of Master Chief and, er, Medal of Honor Warfighter. Creeping around the back and sneaking up on the flag, though, is DICE’s most complete and enjoyable map-pack yet, Aftermath. An apt title, given the triple-A melee that’s dominated the past few months.

While Close Quarters and Armored Kill crowbarred new gameplay styles into the Battlefield template, Aftermath is a first-rate collection of four arenas, skillfully designed for both Conquest and Rush, without a gunship in sight. And while there’s no question that both Halo 4 and Black Ops 2 delivered with their multiplayer suites, it is nice to get back into the full-scale drama of a Battlefield 3 epic.

Kicking off the pack (or the first map I played, depending on your outlook) is Markaz Monolith, a kind of larger, orangey Grand Bazaar, with single-storey buildings to navigate, a few plazas to battle over, and just enough room for a tank and a chopper to squeeze through and cause some classy Frostbite-fuelled damage. It’s a better Conquest map than Rush, as every capture point features multiple entry points and defendable positions, while the MCOM charge is a little too concentrated on an enemy barrage through an out-of-bounds route.

Straight away, though, it’s clear that Markaz Monolith – itself not the best of the Aftermath pack – is a cut above what we’ve been given in Armored Kill. It’s almost as if DICE knew it couldn’t toy with its own winning formula any more now that the competition is doing its thing, and focused all of its Nordic might on building arenas that get the very best out of its game. Nothing feels compromised – in fact, my first couple of Conquest games were enough to completely revitalise Battefield 3 in my FPS-jaded eyes.

Onto Epicenter, the sexiest map of the bunch, and the momentum is maintained. It’s an instant classic for Rush – three capture zones, one located in a shelled out courtyard with a sneaky overlook, and a final blast between the two closest MCOMs in any map. The entire thing takes place in a post-quake Tehran, and looks spectacular (even on the 360, where Battlefield 3 is certainly starting to show its age, or more precisely the age of the console). Every single match I played on this map was riddled with drama – almost every capture point featured an epic shootout or last ditch disarm, and the carnage over the final points is like a finely tuned version of the end of Metro.

It’s solid for Conquest too, although perhaps a little small. The debris makes for great sniper cover, and capture points have to be defended at close range and over distance, so make sure you’ve got a recon in your crew. Spotting and counter sniping are as important as anything on Epicenter Conquest. It really does feel like a signature map – the defining part of Aftermath and just a great combat zone; slowly revealing its secrets and alternative routes with every game that passes.

Epicenter is also the best map for Scavenger, the throwaway new gametype that comes bolted into Aftermath, but absolutely doesn’t define it as a package. Essentially, it’s a rapid Conquest mode, mixed with Gun Game. You must scavenge weapons from the ground, as everyone starts with a rather underwhelming pistol. New weapons hover near capture points (which themselves raise and lower very quickly), but only hold limited rounds. The idea is that you quickly hunt out good weapons and then hook up with your squad to dominate the map, but less-accurate players will inevitably die repeatedly and depressingly, clutching at their pistol and wishing they could go back to being a medic. It’s amusing enough, but much like the Close Quarters maps, it focuses too strongly on gunplay to ever feel truly ‘Battlefield’.

Thankfully, the same can’t be said of the excellent Azadi Palace, which comfortably joins the upper echelons of Battlefield 3 maps, along with Seine Crossing and Davamand Peak, offering a sizeable but not overwhelming playground for online war. Even after extended play, there are still new tactical possibilities, alternative routes and naturally-formed choke points appearing all the time, and the map strikes a beautiful balance between Rush and Conquest – like DICE’s best maps, it works perfectly with both.

It looks the part too, with the eponymous palace resplendent in its destroyed beauty, sun-drenched courtyards and a brightly-lit urban area, all ripe for flanking infantry, or cruising through in a Rhino, one of the new civilian vehicles DICE has introduced.

Rounding out this impressive package are the tight alleyways of Talah Market, which is very reminiscent of one of DICE’s own Medal Of Honor maps. It’s an infantry based map that nods to Counter Strike more than COD, and will benefit those who like to play as Support and Assault classes rather than being a haven for Snipers or vehicle-hungry Engineers. It’s probably the least expansive of the four maps, but matches play out quickly and furiously, once again harking back to some of the feistier battles on Metro.

The Medal of Honor comparison is pretty apt, actually, as for all its faults, DICE’s multiplayer effort back in 2010 was similarly speedy and tense. Even though it’s a map that favours the trigger happy, it still demands intricate squad play in order to succeed.

Ultimately, while the maps are clearly beautifully designed and drawn with typical flair, Aftermath feels more like an open-armed welcome back to the best online shooter out there. It’s easy to lump all military online shooters together and cast them aside if they’re not your bag, but going back into the Battlefield is as rewarding an experience as I’ve had online this silly season.

Played for 6 hours on standard retail Xbox 360 Battlefield 3, with a Premium Subscription supplied by EA.

Aftermath feels more like an open-armed welcome back to the best online shooter out there. Going back into the Battlefield is as rewarding an experience as I've had online this silly season.
8 Four superb DICE maps A welcome return to Battlefield 3 Scavenger Mode is underwhelming Still occasional server issues