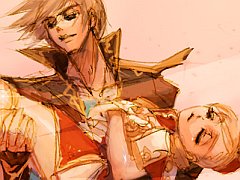 Capcom’s Street Fighter series might be more well known, but speak to people in the know, people who live and breathe fighting games, those who enter tournaments, perve over Japanese hit box documents and take an active interest in how the fighting engines actually work, and a game that is regularly mentioned as the greatest ever is Arc System Works’ Guilty Gear. Released for the PlayStation in 1998, Guilty Gear impressed with its fast paced action and emphasis on combos. It’s endured as a viable tournament fighter to this very day because of its depth and incredibly tight system. A decade later, Arc System Works is back with a new 2D fighter, Battle Fantasia. Unfortunately what should be a momentous occasion for fighting game fans is more of a damp squib – Battle Fantasia has none of the innovation Guilty Gear wowed fighting game fans with back in the late 90s.

Battle Fantasia uses a five button system – light punch and light kick, hard punch and hard kick, and a fifth button reserved for the GACHI move. If you press the GACHI button at exactly the same time as an opponent’s attack you’ll parry it, providing you with an opportunity for a multi-hit combo. Almost every character’s moves are based on fireball (quarter circle forward) or dragon punch (forward, down, forward) motions. Only a couple of characters deviate from this with charge attacks. Super special moves, which use up a tier of your three-tiered MP gauge – Battle Fantasia’s version of a super meter – are also on the whole based on conventional fighting game motions. Two fireballs and a punch, for example.

Things get more interesting with the Heat Up system, which allows you to put your fighter in a brief heightened state, consuming one tier of the MP bar along the way. For most characters this will simply buff their special moves, making them do more damage, for example. For others it gives them new attacks. Marco, the small young knight, spawns a fire breathing blue dragon when he enters Heat Up mode.

Which is the big problem, really. While the fighting game hardcore will find fun to be had with Battle Fantasia, and newcomers will find it accessible given the limited number of special moves each character has at their disposal and the small but easy to digest roster, there’s nothing here we haven’t seen a hundred times before. The parry system, the super special moves, even the Heat Up mode, they’re all yet more takes on classic fighting game features. This isn’t necessarily a bad thing, it’s just that Battle Fantasia simply feels old as a result, like a well-worn suit. There are no surprises, nothing to get the juices flowing. It’s all a bit predictable, unfortunately.

Story is never the point in these types of games, indeed more often than not attempts to provide plot are the source of ridicule and laughter, and it’s no different here. In fact it’s probably worse. Supplementing the main arcade mode is a story mode which contains lengthy Japanese voice over work that plays over cutscenes. It’s quintessentially Japanese – there are headstrong young knights, a giant steam powered dwarf, a guy with no face (brilliantly named Face), a magical bunny rabbit and a cat woman waitress (for all the lads). Everyone’s fighting because of a new evil, called the “Scion of Ill Presage”. It’s got magic, awful Pokemon-esque dialogue and plenty of steam punk fantasy. It’s barmy, twee and won’t be to everyone’s tastes, but at times the art style has its moments, and there’s a certain charm to it all.

What is devoid of charm is the pointless attempt to incorporate role-playing elements into Battle Fantasia. Characters’ health bars are made up of hit points, and you can see the number of points of damage each attack causes. The super meter is an MP gauge. To say this gives Battle Fantasia RPG elements is as hilarious as it is embarrassing. In the end, these features are a token gesture and don’t make any difference to the gameplay whatsoever. You’re still doing damage and reducing your opponent’s health to zero. Larger characters, like Donvalve, might have more hit points, but that’s the case in all fighting games. They just call it stamina and don’t show the numbers.

Guilty Gear fans are going to be disappointed with Battle Fantasia, of that there is no doubt. Despite looking like it should be an incredibly hardcore fighter, what with the heavy anime-influence and Japanese voice work, it turns out that it’s heavy on accessibility, with only the parry system requiring any practice. Dishing out multi-hit combos won’t be difficult for anyone who can do fireballs and dragon punches regularly. Perhaps it’s Arc System Works’ own incredible Guilty Gear series that makes Battle Fantasia’s lack of innovation stick out more than it otherwise would. There is fun to be had here, but it’s fleeting fun. Battle Fantasia won’t be remembered in ten years time, that’s for sure.

There is fun to be had here, but it's fleeting fun. Battle Fantasia won't be remembered in ten years time, that's for sure.
6 Fun, accessible fighting system Charming art style No innovation Role-playing elements pointless

A 2.5D beat ’em up featuring a cast of fantasy inspired characters.

A 2.5D beat ’em up featuring a cast of fantasy inspired characters.