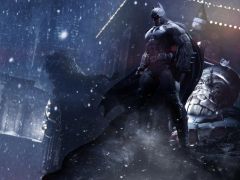 Batman: Arkham Origins is a wonderful version of somebody else’s game. While a return to the Arkham series is welcome – and if you take only one thing away from this review, it should be that Origins is a worthy entry – there’s no denying that Warner Bros. Montreal has taken Rocksteady’s tremendous template and crafted a similar experience.

This means you’re still treated to, for my money, the best combat system in all of gaming, an excellent open world, and a Batman story packed with dozens of knowing remarks, easter eggs and references that will light a fire under any Dark Knight fanatic.

Origins’ narrative too is fantastic. Warner may struggle to work its handful of villains into the equation seamlessly, but seeing the makings of Batman – including his more naive, immature nature – leads to some fine moments that give more weight to the character throughout the entire trilogy.

With all that said, it would be wrong (even as the Dark Knight fanatic I, unashamedly, am) not to underline how much of an extension this feels. Most of the secrets or surprises thrown at you are retreads of what have come before, and as satisfying as revisiting Arkham City’s (expanded) environment is, you can’t help but have a small sense of déjàvu, no matter how slight.

This extends to the likes of Riddler trophies and other side missions. All are well-implemented and addictive, but they’re not of the quality achieved by Rocksteady, something that can also be said for the visuals and overall production of the game.

Boss fights prove to be an issue also. The majority have individual flashes of inspiration, but by and large they descend into messy battles that don’t take advantage of the tools built up over the last 4 years.

Such issues do nothing to take away from Origins’ strengths, though, giving you another chance to revisit a franchise that is surely now one of the generation’s best. Ultimately, this is like a cover song done by a band you’re quite fond of. It may never be better than the original, but it’s a great addition.