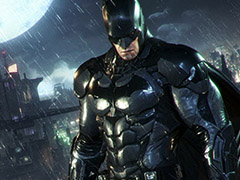 ‘The Batman games wouldn’t be any good if Batman wasn’t in it’ is a long cited, stupid criticism of the Arkham series. By that notion, planet Earth wouldn’t be too joyful to live on if it didn’t have oxygen. The point is moot, because not only are we all privileged to breathe in this fantastic entity known as air, but Batman is definitely in Batman. It’s the very reason Rocksteady’s franchise is so spectacular, and why Arkham Knight is the best Batman game ever made.

No developer could understand the Dark Knight any better, and it’s this love for the lore that allows the third title in the trilogy to be as good as it is – every facet has been meticulously thought out to the point of lunacy. Be it the superhero himself or one of his many enemies, they fit into the world created near perfectly. There’s no filler, and everyone has a reason to be here.

It’s this labour of love that has allowed the Arkham franchise to reach the heights it has, and Arkham Knight is simply another extension of that. That means the same great combat mechanics you’ve been used to over the last few years – although more refined than ever – and the constant satisfying nature of gliding over a city tearing itself apart. The aim from the off seems to have been: ‘create Batman: The Simulator’, or even ‘GTA: Batman’, and that’s essentially what’s been achieved.

With this as a goal, though, and the ever-present checklist that comes from being a sequel, Rocksteady has added in the last piece of the puzzle: The Batmobile. No matter what extension of the Batman universe you visit, the car is always an integral piece of the experience. It’s as defining as the man himself, rethought countless times over the years. Here, it’s been constructed as a tank, a choice that’s as big a positive as it is a weakness.

When you’re driving down the streets of Gotham, random thugs screaming in terror that ‘The Bat’ is out to get them, it’s hard to ignore the rush of adrenaline that starts to bubble inside of you. If you’re a big enough moron you may actually start to believe you are the Caped Crusader. It adds a whole new layer to the Arkham run of games, not least because at the press of a button you can jump into your weaponised vehicle and run amok through a pretty impressive open world.

Unfortunately, the combat when going up against the Arkham Knight’s militia forces in this wagon of destruction doesn’t match up to what the rest of the game offers. While certainly not bad, far too often it feels the need to put you in ‘against the odd’ battles where you’re skirting around the place firing off missiles. It lacks the style and grace present almost everywhere else and soon starts to feel a little monotonous. The fact Rocksteady felt the need to simply up these encounters as the story draws to a close is yet more evidence that the Batmobile has been unnecessarily ‘gamed’. Treating it as something to enjoy rather than something to master would’ve served things far better.

This hits an even greater low when a different type of obstacle is rolled out in front you in what can only be described as ‘ultra war machines’. Outgunning you in more ways than one, your job when presented with these challenges is to sneak around in the car before creeping up behind your target. It’s not particularly fun, or particularly fitting with everything else that’s taken place, and serves to kick you out of the immersion that’s been built up. The same can be said for the specific Riddler Challenges that ask you to race around a catered course. Careering through the streets of Gotham is a hoot, but the handling model in place isn’t tight enough to make these feel all that entertaining.

Why Rocksteady couldn’t have introduced the Batmobile without making it so mandatory is an argument that I imagine will split many, but treating it as a gadget rather than a game changer may have yielded better results. With all that said, though, it doesn’t affect the overall enjoyment of Arkham Knight.

What shines more than ever, for example, is the aforementioned combat. The many tweaks made only reaffirm its status as one of the finest systems in any game. Still focused on striking terror into the heart of your enemy, it’s faster, more varied and smoother than before. The inclusion of ‘fear takedowns’ – an almost QTE-like move that allows you to stalk up to three foes before taking them out simultaneously – just makes it better still.

On top of this, there are numerous new gadgets that open up even more options to toy with mindless hoodlums. It makes every fight feel like a puzzle, with the delightful twist that it’s you pulling all the strings. At certain intervals you’ll also be given the opportunity to team up with some familiar faces (Catwoman, Robin and Nightwing). While never too intensive, they provide a welcome shift in pace, along with the chance to take a group of ruffians down as a tag team. On occasion, you’ll even solve the odd riddle together.

Then there are the many narrative paths that await, all proving to be astonishingly well thought out and put together. Be it the on-going saga and ‘who is it?’ story that follows the Arkham Knight, or Batman’s constant war against The Scarecrow, there’s never a moment that lags or doesn’t feel like it carries some level of importance. Throw in a whole host of surprises it continues to pull out of its magical hat – including the majestic way it introduces the expected cast of characters – and it’s near impossible to pull yourself away from the damned thing. There’s a constant ‘dangling carrot’ that refuses to go away.

There are also moments of such quality they deserve to be mentioned in the same breath as gaming’s elite. A particular end sequence as the main quest draws to a close is one of the very best I’ve ever experienced. Being a fan of ‘the bat’ ultimately helps, but how it turns events on its head and – as stupid as it may sound – makes you feel, serves as a window into who and what Batman is. It’s exquisite.

A thousand other elements could be mentioned and praised – from returning AR Challenges, to the huge open world, the excellent investigative mysteries, usual Riddler teases or easter eggs to locate – but to reveal what Arkham Knight offers is to take away from its impact. It’s certainly not perfect – the Batmobile and the occasional boss fight proving to be of detriment – which means it all comes down to asking the question of whether these negatives are enough to drag down the positives, even if only by a tad.

Considering how good the rest of the game is, I’d say they don’t take away from it at all. Batman: Arkham Knight is not only the best Batman game ever made, but a game that will be remembered as exemplary. Obviously being a fan of the license is going to help no end – the Arkham trilogy as a whole is as important and impactful as its filming equivalent – and how this will ever be topped in terms of donning the cowl and being Gotham’s protector is anyone’s guess. But even those who don’t frequent themselves with Bruce Wayne and his many adventures will still walk away feeling they’ve experienced something special.

It’s epic; it’s grand; it’s addictive; it’s ridiculously good-looking and it’s going to be remembered for a long time to come. A masterpiece.