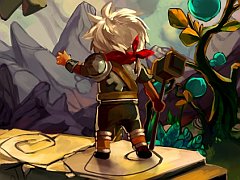 “A proper story’s supposed to start at the beginning. It ain’t so simple with this one.”

“The world got all twisted,” continues the voice, “leaving him stranded on a rock in the sky.” The narration reflects what’s happening on the screen: a white-haired boy lies on a piece of debris, surrounded by the nothingness of space. Not much happens; The Kid appears to be unconscious. Eventually, you push forward on the right-analogue stick, and “he gets up, sets off for the Bastion, where everyone agreed to go in case of trouble”.

For the duration of Bastion, the rich, full-bodied voice of the narrator depicts your every move. He reacts dynamically to everything that happens in the game – your choices of weapons, your combat techniques, your successes, your failures – detailing your exploits to a mysterious third party. It gives a fantastic sense of finality to your actions; this is how the game is meant to be played, this is how the story goes.

While The Kid is often left in the dark with regards to narrative, the voice knows exactly what’s going on. It’s the end of the world: the Calamity has destroyed everything, we’re told. The once prosperous city of Caelondia has been torn asunder. The Kid’s off to fix all that, though.

As The Kid takes his first steps into the unknown, the ground rises up from the abyss below, neatly falling into place beneath his feet. Whether this has some deeper meaning or is simply a nice visual touch I’ve yet to deduce – but there seems to be meaning behind most things in Bastion. The game plays out from an isometric view-point, brought to life with beautiful hand-drawn environments and water-coloured hues. At the same time, though, it’s a scene of destruction and depravity – a hard balance to strike.

Anyway, The Kid eventually reaches the Bastion, a haven for the doomed denizens of Caelondia – not that any of them made it. This has been tainted by the Calamity too, however, and it’s The Kid’s job to set things right. By venturing off into the city and recovering lost ‘Cores’, the Bastion can be restored to its former glory. While the plots of land you can build upon are predetermined, you can decide which buildings and services you wish to restore first.

The armoury is a good place to start. By the end of the game, The Kid will have access to eleven weapons, each of which can be upgraded through five levels. In the armoury you can customise your loadouts and ‘secret skills’, while the Forge lets you use resources collected from the City to upgrade your weapons. If you rebuild the Distillery, you can choose from a variety of tonics to equip, each of which activate passive bonuses such as +10 health, or 100 per cent critical-hit rate when on low health. By rebuilding the Bastion, you’re essentially making The Kid a stronger battle combatant. Every building has its benefits.

In terms of its core mechanics, Bastion plays out like most action RPGs. You kill enemies, earn XP for the pleasure of doing so, and every now and then you’ll level up (which opens up more tonic slots in the Distillery). Combat is a two-weapon affair, and while you’re free to choose from your whole arsenal, it’s usually a good idea to have one melee weapon and one ranged. While the Cael Hammer offers raw power, many will prefer the speed of the War Machete, or range of the Brushers Pike. As well as a bow and arrow, The Kid can wield all manner of firearms: the Scrap Musket, Fang Repeater and Duelling Pistols.

If for whatever reason you grow tired of collecting Cores and advancing the story, you could choose to visit the Proving Grounds, where you can take on weapon-specific challenges at your leisure. The Cael Hammer challenge, for example, asks you to smash 100 objects in the fastest time possible, while for the Breakers Bow you’re required to eliminate a set number of targets with as few arrows as possible. Getting first place in each challenge offers a new skill for that weapon as a reward.

In addition to this there are three ‘Who Knows Where’ challenges to complete, which pit The Kid against increasingly difficult waves of enemy as the narrator fleshes out the backgrounds of key characters in the story. Each challenge comes with its own leaderboards, so you can compare scores with friends. In order to beat said chums, you’ll want to make things as difficult for yourself as possible.

At the Bastion’s shrine you can invoke the wrath of the gods which – depending on which god you choose – gives your enemies certain advantages. You can make them quicker and stronger, give them regenerative powers and ensure they don’t drop any health potions. On the flip side, you’ll earn more XP and money. It’s swings and roundabouts: The more gods you invoke, the higher the leaderboards you’ll climb.

The sound design needs some words dedicated to it before we go any further, as it’s fantastic from start to finish. While the instrumental themes have an almost Wild Western twang to them – similar to the score of Firefly, I found – later on in the game this is swapped out for actual songs, with lyrics contributing to the story as a whole. As with Braid, the soundtrack goes a long way in defining the tone and atmosphere of the game.

Comparisons to Jonathan Blow’s indie sensation don’t end there. As with Tim’s time-travelling jaunts and all that nonsense about the atomic bomb, there’s a deeper meaning to everything in Bastion. Once the credits roll, you’ll flock to the internet, desperate to discover what others made of it. It’s not quite as open to interpretation as Braid, but you’ll enjoy the conversations it inspires nonetheless.

I’m currently working my way through a second playthrough, hoping to gleam a deeper meaning from the script, and there’s a lot to pick up on the second time around. With the main game finished there’s the option to start a New Game +, which transfers your XP, skills and upgrades from your first save. There’s just under six hours worth of content in a single playthrough, more if you spend time satisfying the requirements of Vigils (achievements, of sorts), which can be tracked through the Memorial in the Bastion.

Bastion is the perfect game to kick off Microsoft’s Summer of Arcade, capturing that certain something that Limbo and Braid had in previous years. For 1200 Microsoft Points you’ll be rewarded with an experience just as memorable as any retail release this year. It’s kind of upsetting returning to the real world after adventuring in Caelondia; without that velvety voice narrating what you’re doing, giving purpose to your actions, life isn’t quite so entertaining.

Bastion is the perfect game to kick off Microsoft's Summer of Arcade, capturing that certain something that Limbo and Braid had in previous years.
9 Dynamic narration is incredibly satisfying Captivating story Audio is fantastic throughout Perhaps a little obscure for some