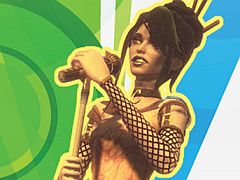 Band Hero might as well be called Guitar Hero 5: Pop Edition. That’s not a slight on the game Activision has put together, seeing as what you get in Band Hero is a polished rhythm action game; just don’t expect anything more than Guitar Hero 5 with different music. Although seemingly intended to appeal to the younger end of the genre’s fan base, the game only goes so far, resulting in a strange mishmash of a tracklist that almost seems like a half-hearted effort.

Just as in GH5, multiplayer is the focus of Band Hero. Party Play was one of the best new additions to the Guitar Hero series, and it’s in full effect in Band Hero. When Party Play is activated the game essentially turns into a music jukebox, playing songs on its own accord, while players are able to jump into the game whenever they feel like it and with any instrument. If four players all want to be on lead guitar, they can, and if your kids are having some kind of music party and all want to sing lead vocals, that can be done too – a karaoke mode allows everyone to sing along to their favourite songs together. The in-game interface, as in GH5, is brilliant, allowing you to set the various options for difficulty and play style, and it’s easy to skip a song, pick something new or create your own play list. Without any scoring to worry about, everyone is free to jump in and have fun, making it the perfect mode for beginners.

Part of Band Hero’s appeal, or so Activision will be hoping, is the inclusion of many current pop stars. Such musical maestros as Taylor Swift (who doesn’t love her smash hit “Love Story”?), No Doubt and the lead singer from Maroon 5 are all in the game as virtual avatars, able to be made part of your band. You obviously get a selection of their most popular songs, too, along with others from The All American Rejects, Corinne Bailey Rae, Fall Out Boy, Jackson 5, Lilly Allen, Nelly Furtado, Jesse McCartney and more.

It’s mostly a selection of tracks that will appeal to a fairly specific “listens to most stuff on the radio” group of people, but there’s the odd track thrown in that seems completely at odds with the rest. We can’t see many of the game’s target audience having a soft spot for The Rolling Stones’ “Honky Tonk Women” or Poison’s “Every Rose Has its Thorn”. The biggest chunk of the tracklist is definitely aimed at younger gamers, but there’s certainly some here for adults and the odd classic that will have broad appeal. Considering you only get 65 tracks on the disc (20 less than in GH5), the decision to mix things up so much, instead of focusing entirely on the younger audience Band Hero is primarily aimed at, is somewhat baffling.

There is DLC if you want to add to your collection, and you can import a selection of tracks from GH5 and World Tour (not all are available and it’ll cost you a fee), but it’s hard not to feel that Activision could have gone the whole hog, rather than trying to shoehorn in some broader appeal. With GH5 on the market already, this should have been designed completely for younger players.

For those who want to compete rather than just have fun with friends, there are obviously plenty of score-based multiplayer modes too, either played locally or online. You don’t even have to unlock the tracks, with the entire tracklist available to play with friends from the moment you start.

Actual gameplay mechanics remain pretty much as they were in GH5 and almost every GH game that’s gone before it, with you strumming on a guitar, banging a drum or wailing into a microphone in time with the music and on-screen notes. If you choose to play as a proper band you’ll have one player on lead guitar, another on bass, a third on drums and the final player as vocalist. None of the tracks here are as tough as those in GH5, which is wise considering the game’s intended audience, and when playing as a band you can bring failed members back into the performance if you perform well over a short period of time.

Once you’ve formed your band, named it and selected all the members, it’s time to perform gigs at various venues, just as you did in GH5. Performances earn you stars, with the better you do the more you receive as a reward. Stars are used to unlock new venues and progress through your career. Some extra stars can be earned through successfully completing bonus challenges, too, just as you could in GH5. Hopefully you’re starting to see our point. This is GH5 in a set of younger clothes.

One area in which Band Hero differs considerably to GH5 is presentation. GH5 toned down the series’ trademark garish visuals, but Band Hero is positively bursting with bright lights and neon displays. Lip synching on your chosen vocalist is impressive, the on-stage performances are always lively, and there is a strange joy to be had by sticking together a band of cloned teenage pop stars. Crowds look a little odd, lacking the detail of the band members, but you only really see them for a few moments here and there.

On top of the core game modes there’s a quickplay option, leaderboards to keep track of how you compare to the rest of the world and the still impressive GHStudio for making your own tunes. All in all it’s an impressive package. There are also a number of exclusive features for 360 and Wii owners, but nothing that will upset PS3 owners too much. Xbox 360 avatars and Wii Miis can be used in the game. Completely unique to the Wii game, just as was the case in GH5, is Roadie Battle, a mode which links two DS consoles to the game, enabling a guitar duel battle mode for four players – two on Wii and two on DS.

Eagle-eyed readers may well have noticed that much of this review bears more than a slight resemblance to the Guitar Hero 5 review I wrote a few months ago. Just like this review, Band Hero is strikingly close to Activision’s former release; it’s a game that comes across more as GH with a different musical focus, rather than as a new IP in its own right. Band Hero is far from being a bad game, but somewhere along the line it seems the new franchise’s focus became a little confused.

It's a game that comes across more as GH with a different musical focus, rather than as a new IP in its own right. Somewhere along the line it seems the new franchise's focus became a little confused.
7 It's more Guitar Hero Lots of music for younger gamers It's not all for younger gamers Feels more like an expansion for Guitar Hero

Play together on guitar, drums, bass and microphone.

Play together on guitar, drums, bass and microphone.