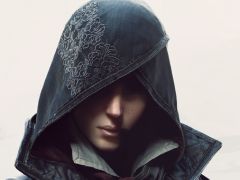 Assassin’s Creed: Syndicate’s greatest strength, like with its predecessors, is its city. Ubisoft Quebec, developing the ‘main’ yearly instalment for the first time, has done a fine job with London, 1868: a city inching towards modernity in some respects while remaining positively medieval in others (Lambeth). As you clamber across back alleys and terraced houses, scuttle across cobbled streets and zip-line (a great inclusion, given the open spaces) from building to building, there’s a busy, interesting world down there, the remnants of which you can still make out today. Quebec has expertly reproduced the world-leading grey drizzle of Britain, the sort whose pantone would read ‘depression’. When the sun comes shining through, you feel tangible relief. Until it invariably goes again. It is a magnificent shithole.

Being in this world is a joy, especially at night where moody lighting and pouring rain produce some startling images, a threatening world of poverty and violence. Scaling Big Ben or St Paul’s, familiar and beautifully rendered in their vast glory, is one of the most arresting feelings I’ve had this generation. You can play Frogger across boats on the Thames. Waterloo, Westminster, the Strand: this is digital time-travel. The rather basic set-up – Assassin twins Evie and Jacob (resourceful and headstrong, basically) aim to take back London from Templar control by seizing various strongholds – works perfectly, as there’s so much of the city you’ll want to see, climb, run through. It’s a fantastic achievement. Granted, the included historical characters (Dickens, Marx, Nightingale, among others) reach for historical reverence but land on ‘Night at the Museum’, and the story is rightly jaunty if somewhat lightweight, but Evie is engaging (and actually has conversations with women about something other than men) and Jacob, while a total shit-eater, eventually starts to grate less.

That all this good work is pissed up the wall by near enough every other element of the game, which is so mechanically old, so hopelessly decrepit, would be an outrage if it weren’t so drearily predictable. Simply put: whatever decision-making mechanism is in charge of Ubi’s dev ‘method’ is actively harming the quality of its games. From AI, to mission flow, to combat, the core pillars of these games are weathered at best and rotting at worst. Syndicate feels ancient, like Black Flag did, like Revelations did. I played it on a PS4, but it may as well have been a 360.

In a world where MGS5 exists, Syndicate isn’t just behind the curve but in the bin. Kojima’s game embraces agency, mixing together alert phases, level-matching, and player skill. You storm a base with a plan – the AI responds in a way that makes it seem like it has a plan. It works mechanically, in the purest sense – digital triggers and cogs that generate responses and engagements to suit the player’s status and their surrounding environment. Creed’s AI has two states: confused child and angry terrier.

Guards are easily lured, en masse, to their deaths by whistling from around a corner, and it’s still possible – if more difficult than before – to lure them to their doom one by one in a haystack. They see you and forget you instantly if you duck around a corner. They all behave the same, really, all look the same literally. (Every member of each class – sniper, heavy, etc – has near-exactly the same model). They look and feel like the marionettes at Kevin McCallister’s house, boasting the look of real people from afar, but get closer and they’re pulled and pushed by crude, obvious forces.

They make the missions indistinguishable from one another, even more so than the take territory/kill sub boss/rescue whoever loop does. Apart from the environmentally-pleasing quests like those set in the Tower of London, or the Hitman-style missions which offer multiple unique kills (such as disguising yourself as a ‘patient’ in an operating theatre) and sneaking paths, it’s difficult to specifically recall where I was and what I did across the many hours I played it.

Then there’s combat, which is somehow worse than the stealth, encompassing a few combos and strategically placed counters, as ever. It starts out feeling old and ends up feeling like a punishment for murder. You’re an assassin, trained for combat, but there’s little finesse, nor timing. Enemies have skill levels, encouraging players to level up themselves via various trees, but even when taking on an overmatched territory you can still win by patiently pressing circle and triangle until everyone falls down. Some kill animations are nice, but Arkham this isn’t.

Same old Ass Creed then. Sadly, this also applies to the game’s performance: it runs poorly in places and is very, very buggy. I had cutscenes with main characters talking to a fully-voiced invisible man (the model hadn’t loaded in), NPCs sliding rigidly around the map, guards stuck in walls, jugglers juggling balls which were floating a good foot away from them, AI unable to walk in a straight line or down stairs without bumping a wall and resetting the pathfinding. (It seems like the greatest threat to the Templar’s control isn’t Evie or Jacob, but the fact they can’t get through doors.) The look of London is great but image quality is generally low, jaggy, with inconsistent texture quality. There’s major pop-in at close range (especially while in a horse and cart) and the frame rate tanks in crowd scenes, making those wonderful strolls a chore.

Then there are the controls, which are relentlessly terrible. The simplification of climbing movement to up/down modifiers seems like a good idea, but in reality the game is often confused by the fact the player may need to go up to come down. Humans call this jumping, but Syndicate is woefully inconsistent and illogical in this regard, often refusing to respond to button presses which, when coupled with the game’s input lag and massive animation cycles, often means getting stuck on geometry or climbing the last thing you’d possibly want to.

Speaking of commands: whose idea was it to put EVERYTHING on circle? there will be times when you’re trying to bundle a kidnapped man into a getaway carriage and ‘kidnap’ ‘carry’ ‘knock out’ ‘drive’ ‘hide’ and ‘loot’ are all on the same button, which makes for some interesting idiocy as the game desperately tries to interpret your various inputs. These issues make Creed fiddly and unresponsive, and are compounded by the game’s hard ‘stealth/not stealth’ AI modes. A lot of missions require you to kidnap someone, but be seen and you generally have to fight: the button to kidnap is also the button for counter. Especially irritating when you drop a smoke bomb to escape with your prey: even though the AI is incapacitated, supposedly leaving you to Batman your way out of there, you’re still locked into attack mode.

The greatest description of Ubisoft open world games, as noted here, is that they’re about the accumulation of power. It’s true: you feel a pleasing sense of progression as you take territory, peeling the enemy wallpaper from the map and seeing what’s underneath. That still rings true here. Syndicate is a compulsive game, and in places a fine one. When it is good, when the AI is behaving and it’s running well, it’s very good. But Syndicate is so adept at self-sabotage that it’s nearly impossible to enjoy this world, this game. It constantly rips you out of the experience, whether that be from frustration at the mechanics or outright bugginess. You’ll want to forgive it its flaws because it does Victorian London so well, something you just can’t get elsewhere. But leave it a few minutes and it reveals itself to be as utterly flawed as its forebears, a beautiful facade on a rotting core.