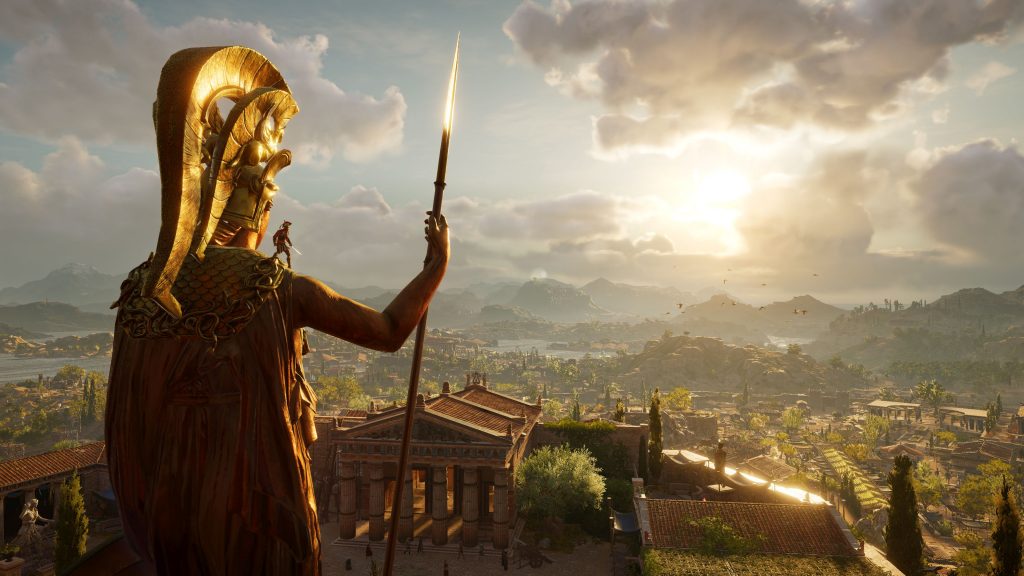 Assassin’s Creed Odyssey is a lot of things. It’s utterly sprawling, occasionally to the point of overwhelming. As you navigate the bustling streets and choppy waters, your goal is sometimes obfuscated by the myriad of icons popping up on your radar, like happy meerkat heads. It can also be pretty damn funny – at one point, Alexios shoves a rival’s false eye up a goat’s arse, inevitably resulting a tense ruck between the two. More than anything, it feels like an amalgamation of all the (mostly) best things the series has picked up over the past half-decade or so, and a natural evolution of 2017’s majestic Origins.

It’s also the only game that lets you climb Zeus’ dick (a giant statue, just for clarification).

With Odyssey, the franchise’s eponymous outfit that has acted as the beating heart of each narrative has gone. Set hundreds of years before the birth of the Creed, Odyssey sees Alexios or Kassandra – it’s your choice who you play as – getting involved in the midst of the bloody 30-year Peloponnesian War, where Athens and Sparta squared off, in the year 431 BCE. A descendant of the legendary warrior Leonidas I, your chosen mercenary gets tangled in the political wranglings of the period, interacting with dozens of historical characters as they deftly dodge and weave between the perpetually-grinding gears of war, leading them on a personal journey that feels less constrained than past offerings, and stronger for it. 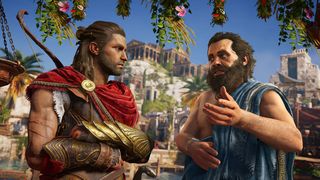 The performances are solid and impressively nuanced at times, and the main cast shines with interesting dialogue that helps bring out a certain warmth and believability. It’s not always consistent, but it delivers the goods when it matters. It’s worth pointing out that much of the dialogue is the same regardless of who you pick; Alexios and Kassandra share the same banter with crewmates and both have the chance of having their wicked way with that randy old woman in Athens. It’s not a major issue, and having the freedom to choose is definitely a welcome addition.

Ubisoft doesn’t muck with the basic paradigm. You’ll still be skulking around in bushes, surreptitiously dispatching your foes and parkouring your way across rooftops with effortless precision. In fact, these ubiquitous mechanics feel more satisfying than ever, cleanly polished to a sparkly point after years of use, much like the now-absent iconic Hidden Blade itself. However, Odyssey’s full-blown love affair with RPG mechanics is what really sets it apart from past Creeds; it’s an emphatic leap, and one that seeps into almost everything you do in the game’s massive Greek playground.

Having a natter with NPCs is more engaging now thanks to multiple dialogue options. Aside from quizzing quest-givers for more info, you can lie your arse off if you want, and even threaten people if you fancy being a total git. Can’t get into a guarded warehouse to meet someone important? Bribe the guard. Swore to protect a civilian from a pack of ravenous lions but failed? Lie to his wife and tell her he’s safe and sound, or tell the truth – it’s your call. Yes, Mass Effect did this a decade ago, but these added wrinkles still make Odyssey the most engaging series entry yet, giving conversations far more depth and your actions having more weight than before. Conversely, the romances seem totally superficial; there’s no meaningful relationship to be gained, with the only victory I had being that I was able to boast that my Alexios shagged a bloke who looked like Laurence LLewelyn-Bowen. 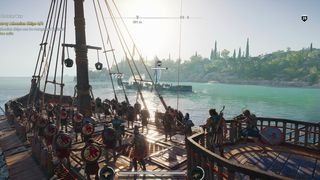 Perhaps the biggest contribution you can make to the world is by shifting the equilibrium of power. Each region is either ruled by the Athenians or the Spartans, and by sabotaging supplies, bumping off troops, and neutralizing leaders, you’ll be able to precipitate a massive ruck between the warring factions. You can plump for the attacking or defending side; it doesn’t matter, as you’re a selfish merc who’s totally in it for the shiny rewards. These battles are impressive in terms of scale, with dozens of soldiers butting heads that makes one of EastEnders’ epic Queen Vic brawls look like a minor scuffle. The feeling that you are tipping  the scales of these massive battles is palpable, as is the satisfaction of bathing in loot in the bloody aftermath. These are entirely optional of course, but that doesn’t matter; I felt compelled to do them, and therein lies one of Odyssey’s biggest pulls – you’ll simply want soak in everything its world has to offer.

Streets are littered with side quests from poor and rich alike; forts brimming with sparkling supplies are begging to be pinched; the wilderness is ripe with hidden caves, tombs, and camps to explore; and sunken wrecks cough up lost riches in the sky-blue waters of the Aegean Sea. Quite simply, there’s a shit load to see and do, and the game remembers some of your more unscrupulous activities too. Get a little too stab-happy or pinch one too many trinkets, and you’ll have hulking Bounty Hunters on your arse. These guys and gals make nightclub bouncers look about as threatening as Ian Beale; they’re basically mini-bosses, and will rough you up good unless you’re powerful enough to take them on. You can pay off the bounty easily enough, but the rewards you get for defeating these powerful individuals makes it worth the effort.

Speaking of which, scrapping in Odyssey is governed by three distinct skills: Hunter, Warrior, and Assassin. Ability points gained by levelling up can be pumped into unlocking new techniques in each of these areas, and you’re totally free to play how you see fit. The satisfaction of crafting Alexios or Kassandra the way you see fit plays into Odyssey’s biggest strengths: freedom. If you fancy yourself as the next Hawkeye, then go mental with your bow; on the other hand, you might just feel like cracking some heads with a massive axe, so the warrior skills will be right up your street. It’s entirely your call. 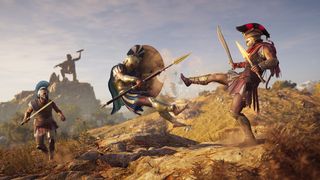 Combat is a concoction of strategic counterting, dodging (made all the more easier by the fact you can dive and roll) and cinematic flare. You’ll block blows by hitting L1 and R1, and go at it with swords, spears, axes, daggers, and more, and for the most part, it’s fine. It doesn’t feel as intuitive as holding a shield, à la God of War, and it’s hampered by a dodgy lock-on system – which irritates most during fights with multiple foes. Fortunately, you now have access to four special abilities for ranged and melee attacks, which you assign to the face buttons and access by giving L1 or L2 a squeeze. You’ll snuff out lives with a supercharged arrow, go all 300 on someone’s arse with a meaty Spartan Kick, slice through foes with a bull charge, and spill buckets of claret all over the gaff with unique finishers. There’s a tactical edge that seeps into these moves too, as you can only perform them by charging the adrenaline bar at the bottom of the screen, so you have to think about when it’s best to use them. It’s certainly the most dynamic the series has been, and all the more enjoyable for it.

You’ll be spending a fair bit of time at sea too, although, unlike Origins, your ship isn’t just a means of getting from A to B. Doffing its cap to Black Flag, Odyssey has you chucking fire arrows and ramming other ships for loot, which can be fed into upgrading your vessel. As a nice touch, you can also subdue enemies and hire them as lieutenants for your ship, each one boasting a perk that will give your swashbuckling shenanigans a bit of extra punch when it counts. What’s more, the crystal-clear waters are ripe for the picking too, with bobbing supplies to be pinched at the press of a button, while remote islands, brimming with hidden secrets, call out to you through the mist, like the very Sirens of Greek legend.

Odyssey is a breathtakingly stunning game, offering a rich, diverse tapestry of architectural beauty. Towns bustle with life, with lavish abodes and flooded shanty towns offering a striking juxtaposition of rich and poor, while the wilderness – with its majestic, clifftop views and striking sunsets – sparkles with vibrant colours and a grand sense of adventure. Indeed, the sheer scope of the game eclipses anything in the series beforehand. Even better, there’s no obtrusive loading screens on land or sea, offering a seamless, immersion-soaked experience. 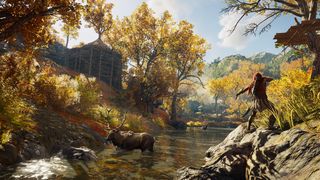 Inevitably, the action does trip over itself a few times. Guards would get stuck on an endless climbing loop; the frame rated dipped in busy times, to the point where Del Boy’s Pratt Mobile looks as fast as an F1 racer; and on one occasion I found myself being mauled by a floating dog. I mean, yeah, fair play to the pooch I suppose, but still; niggles like these do tend to break the spell, so to speak.

Assassin’s Creed Odyssey is ma-hoosive. It’s compelling, gorgeous to look at, at times messy and a bit daft, but more importantly, never feels tired or laborious. If Origins didn’t sway you, then this isn’t going to make any difference; although, if you hate Assassin’s Creed, you probably made that decision yonks ago. That’s a shame, though, as Odyssey is jam-packed with content and discovery that’s absolutely begging to be experienced.

Assassin's Creed Odyssey sees the franchise at its strongest and most ambitious yet. With a compelling story, solid RPG mechanics, and heaps of content to soak up, you'll be spending months immersed in its sprawling Greek sandbox.
8 Great story Swelling with content New RPG mechanics offer a refined gameplay experience Some immersion-breaking bugs Combat occasionally falters in busy scraps