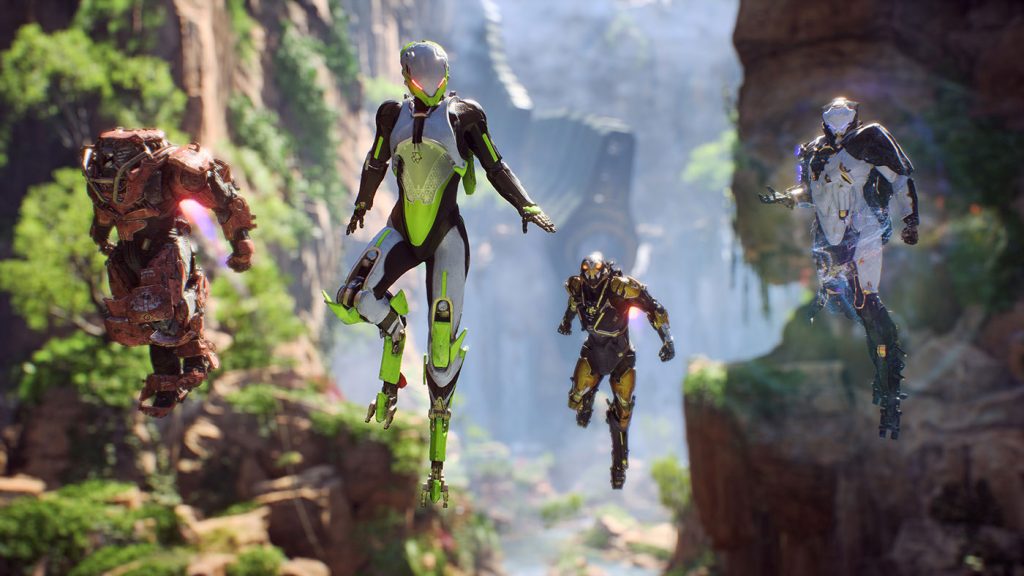 Anthem is a bit of a Frankenstein’s monster. The suited-and-booted sci-fi opus is an amalgamation of ideas nabbed from countless looter shooters, the most obvious being Destiny. The frustrating thing is Anthem could have been something special, rather than just merely ‘okay.’ Nothing here is necessarily outright wank, it’s just been done better before. It has sparkles of brilliance within its Iron Man-coated shell, and there’s no denying it’s easy on the eyes. However, it’s abundantly clear that BioWare should have stuck this one back in the oven for another six months or so given its current state.

Anthem weaves a typical good vs evil story. Humanity is attempting to colonise an unnamed planet, discovers an all-encompassing MacGuffin known as the Anthem of Creation that sets off massive terrain-destroying events known as Cataclysms, and then finds itself rucking with two opposing factions: the Scar, bug-like creatures that are somehow proficient in firearms, and the human Dominions, lead by a bloke wearing a huge cape and mask, who looks like he’s just been kicked out of a low-rent sci-fi convention.

Humans now defend their cities using Freelancers, warriors piloting mech suits, known as Javelins, which can fly and blow shit up with all manner of super-powered equipment. You’re one of these Freelancers, armed to the teeth in your Javelin and hired by the high-ups of Fort Tarsis – which is your stronghold. You’re charged with protecting the exotic realm of Bastion, the vibrant location you explore during missions. 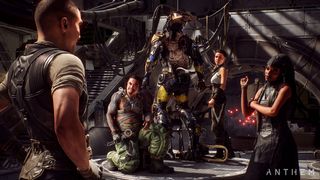 Unsurprisingly, this is BioWare’s big pull. Flying about in your Javelin is an absolute blast, and makes Anthem the best Iron Man simulator I’ve ever played. Well, okay, to be fair, Tony Stark’s suits don’t overheat, but still, Javelins are awesome. The flights feel fantastic, and it’s immensely gratifying to double-jump, hover, and then transition into full-flight mode thanks to the intuitive controls – just a quick punch of the right and left analogue sticks is all you need to get some serious airtime. It’s addictive, looks flashy as hell, and is the best way to soak in the beautiful sights of Bastion. There’s also a bit of strategy involved too, as you can’t abuse the feature; your Javelin overheats after a while, so you have to be mindful of using it too much or cool your jets via nearby water.

Sadly, scrapping is where Anthem starts to feel lacklustre. There’s nothing intrinsically wrong with the combat – BioWare did a decent job with third-person combat in Mass Effect 2 and 3 – but Anthem falls a bit flat. Guns feel weightless and don’t pack much of a punch, and there’s no tactical nuance here; enemies wait in the open to soak up copious amounts of lead, and then kick the bucket. Lather, rinse, repeat. Aesthetically, they’re pretty cookie cutter, too, and their AI appears to have been programmed by Trigger from Only Fools and Horses.

More successful are the hulking bosses you’ll face, which require a compelling blend of ground and air-based attacks on your part, allowing you to mix and match tactics and combine your repertoire. It’s far more engaging than rucking on the ground, and injects a much-needed layer of strategy into the bread-and-butter combat. 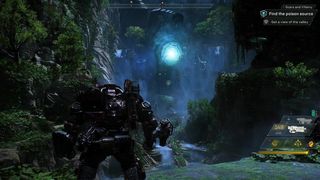 Your exo suit’s powers are the best bit about fighting. Each Javelin – there’s four in total, and you unlock additional suits every eight levels –  has its own unique attributes; the Colossus, for example, is a bulky sort that is pretty much the Grant Mitchell of Javelins, while the Storm is the nimble space-wizard. I first plumped for the Ranger, a jack-of-all-trades, which seemed to strike a balance between the two. Lobbing homing rockets at foes and activating your super, which sends a salvo of explosive death raining down on multiple opponents, feels great and is extremely satisfying to pull off.

Bizarrely, for a game that encourages playing with others, Anthem feels remarkably lonely when doing so. Communication is virtually non-existent, save for a number of rudimentary emotes (Hey, let’s wave at each other or applaud the bloke next to me, ‘cause that’s going to help matters, right?), and you never really feel part of a squad. Team play is also exacerbated by some frankly obtuse designs. The worst is when Anthem magically teleports you to the rest of your team if they’ve buggered off ahead of you, meaning you can’t explore freely and may even miss crucial parts of the mission.

Speaking of which, the missions themselves are disappointingly basic. Most of them involve you going from A to B, scanning objects or collecting intel, fighting off waves of bad guys, and that’s it. Occasionally it makes you protect stuff while fighting off bad guys inside a magic green circle, or picking up flying orbs to activate a thingamabob. 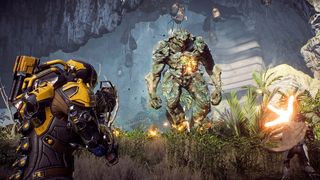 Even the loot is mundane. You’ll be rifling through tons of it at the end of every mission, but all the guns and gizmos just look the same. There’s no discernible difference, other than weapons being a different colour – denoting their rarity – but there’s no personality in them. (I mean, at least give my new Shotgun a decent name, like, say, Mr. Boomstick, eh BioWare?) The most egregious thing about the loot system is that you can’t even equip weapons on the fly; you have to first go back to the Forge within Fort Tarsis to tinker with your character every single time. And to do that – or when you do anything in Anthem, for that matter – you’ll have to sit through seemingly endless, obnoxious loading screens. It kills the pacing stone dead. One of the missions requires you to grind through a list of arbitrary tasks, spending hours wandering around in freeplay ticking these off. It’s incredibly laborious, and takes longer than any previous mission you’ve done up to that point. I also encountered a few instances where I was booted off the servers, which – even more so for an online title – is bloody ridiculous.

One thing you won’t get bored of is soaking up Anthem’s exotic open-world. While it’s not massive, BioWare has packed it full of visual splendor, with its incongruous marriage of lush forests, sparkling waterfalls, and remnants of technological wonders and lost civilizations making it a place you’ll want to explore. The story’s not BioWare’s best effort, but it’s still solid; there’s a couple of genuinely decent characters (Owen being one of the best, and to my delight is voiced by the bloke who played DC Zain Nadir from The Bill), and there’s some interesting supplementary lore that punctuates the main story beats that you find hidden in notes and other bits and pieces. There’s plenty of opportunity to have a chinwag with the cast, but don’t expect to forge any meaningful relationships. Dialogue choices are superficial, although there’s only so much BioWare could do in this respect, given Anthem’s nature as an online multiplayer title.

Anthem has potential. In its present state, it’s a bit of a mess: underdeveloped, repetitive, and confused about what it wants to be. BioWare’s sci-fi shooter still has its moments, but they’re clouded by poor design choices and technical hiccups. Being a games-as-a-service product, there’s every chance things will be polished – and I really hope they are. For now, though, Anthem feels like a bit of a wasted opportunity.

Anthem is gorgeous to look at and can be fun in places, but for now it feels decidedly half-baked.
5 Gorgeous visuals Flying in your Javelin is just awesome Repetitive missions Boring loot