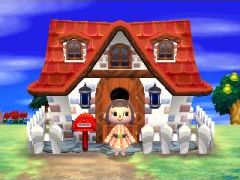 Animal Crossing: New Leaf doesn’t beat about the bush, as you’re immediately tasked with the hefty responsibility of being the Mayor of your new town. Nothing initially seems out of the ordinary to battle hardened Animal Crossing vets; you’re still doing the same things you did in the other games. You’ll still be kvetching at animals when they offer to swap their horrid t-shirts for your lovely furniture, and you’ll still find yourself spending more hours than really necessary fishing and fossil and bug hunting. But a few days in, you begin to realise just how wonderful your new terrible power is. More on that later.

Handheld consoles are the perfect home for Animal Crossing, so immediately this is a vast improvement on the Wii version through simple matter of convenience. New Leaf’s early game is addictive enough that you’ll spend hours on it – moving into your house, working off your debts by doing jobs. Eventually you’ll just be snapping open your 3DS to check on your village during lunch breaks in small spurts. Obviously where people won’t see you.

It doesn’t feel as immediately special as the first time you go through Wild World, but slowly and surely, New Leaf reveals it’s got a hell of a lot more tricks up its sleeves. Before long, you’ll be completely devoted to this picturesque life simulation again. Perhaps even more so than before.

From the off, the humour and visual style that is the series’ hallmark is still present in abundance, only naturally the village has been given a much needed and (rather obvious) spruce up compared to its last handheld outing. Your little chap looks more realistically proportioned now, and the village itself has a lot more going on graphically. Also I’ve no idea whether this is coincidence or fate, but the first villager I met in Wild World was the first villager I met in New Leaf too. It was Jay the Blue Tit. It’s at this point I realise that Jay has been in my life far longer than any friend or girlfriend. It’s feasible that when I die, the eulogy is going to be read by a pixelated blue tit.

It’s still full of rambling nonsensical conversations, bad fishing puns and subversive humour, which was what won so may over in the first place. It’s chock full of character, and yet there’s a dark heart beating beneath the breast of Animal Crossing too. It does after all encourage you to pillage your natural surroundings and take advantage of your fellow man (animals).

The game’s familiar to its predecessors for the first few days, but then things start to happen. After the third day, you get to visit your forbear Tortimer’s Island retreat and catch all manner of exotic beasties and take part in minigames in order to buy yourself new things with medals. More importantly though, your mayoral duties come into play.

You can change your Animal Crossing town (I called mine Goldblum, because I saw a poster for Jurassic Park 3D immediately before playing it) in various ways as Mayor, inflicting your every malicious whim upon the poor anthropomorphic denizens. You can confront problematic citizens, change shop hours (you can have all the little blighters working ’til 3 in the morning, they haven’t unionised) and improve your town with public work projects, like new buildings and bridges.

Basically, you’ve more incentive to play this time, rather than just pay off ruthless property magnate and oligarch Tom Nook. Of course, you’re still indebted to him, and paying off the debts on your home is still paramount (you’re in no rush though, Nook isn’t going to come over with a cabal and break your legs or something), but there’s far more depth and replayabilty here, which considering the total hours its possible to put into Wild World, is a mildly terrifying prospect.

Online play is back, as half the fun of Animal Crossing is visiting your friends’ towns and causing all manner of havoc, chopping down trees etc. If you’re not as mean as me though you can send presents and nice letters to your friends, as long as you don’t use rudey words, and why would you? Swearing in an Animal Crossing game is like laughing during a funeral. It’s completely inappropriate and disrespectful.

There’s enough new here to convince fans of the earlier games to take part. Pretty soon, Animal Crossing will once again become part of your daily routine, to the extent you’ll have friends asking ‘what are you thinking about’ as they notice your vacant, thousand yard stare in the pub. Of course you will reply in a dull, browbeaten monotone, ‘my turnips.’

It’s proof again, if proof was ever needed, that the 3DS is absolutely essential at the minute, given the sheer volume of quality it’s been showered with in the last few months. Is Animal Crossing the best of the lot? Possibly.

Sure, it’s maybe not as thrilling as the first time you goof about with the animals in an Animal Crossing, a bit like how you never forget your first Katamari, and if you remained unconvinced before you’re not going to change your mind now, but New Leaf is still more fun, more engaging, and will last you longer than pretty much everything that’ll come out this year.

Played during lunchbreaks, morning commutes and during large chunks of the evening for about a week, totally about 17 hours according to the 3DS. Caught loads of fish, fossils and bugs for Blathers. He still hates bugs.

An essential buy for Animal Crossing fans.
8 Effortlessly engaging, funny and addictive The same Animal Crossing you know and love, now with more to do Makes real life seem even more horrible after playing it Doesn’t feel as special as Wild World