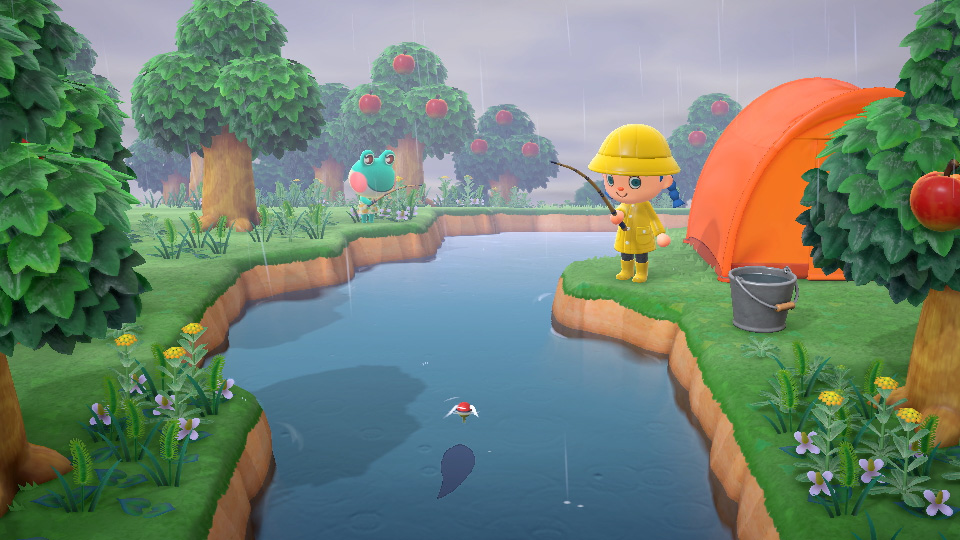 It’s 2005. I’ve had an operation at a hospital outside of the city, and there’s a long (smooth, tarmacked, and well-lit) road to recovery ahead of me. Knowing I would have to be brave (and bedridden for a bit), my mum and dad gave me a Nintendo DS with Animal Crossing: Wild World. I play it through the interminable days off school, doing odd jobs to pay off a debt, fishing and hunting insects, gaining new friends—who were an alligator, an elephant, and a bull—and becoming a fashion designer in my free time. This town is my El Dorado. It sucks when I have to go to school again.

It’s been eight years since a core Animal Crossing game was released for consoles. “Core” sounds too serious a word to use here, in an anthropomorphic, quaint social sim game where the player is given a house for $400 by a retail magnate tanuki, named Tom Nook, and shakes furniture from trees. But, in the series’ Switch debut, Nintendo encounters a dilemma: stick to the status quo and scratch that nostalgic itch, or push the boat out, figuratively and literally?

I am delighted that it chose the latter. In Animal Crossing: New Horizons, Tom Nook and his nephews, Timmy and Tommy, whisk you to an uninhabited desert island of your choosing, courtesy of the Nook Getaway package, and you pitch your tent along with two fellow intrepid travellers. Nook, savvy as ever, notes that the island is filled with resources, and that a real settlement could be built here, in time.

To play a game for review means to play it as much as is humanly possible in the (often limited) time before an embargo. However, Animal Crossing: New Horizons is one of the most measured and undemanding games I’ve ever played. Starting with nothing and staggering its progression, the pace is controlled but not cramped. Errands are exciting, rather than a pedantic tutorial before the real fun begins. 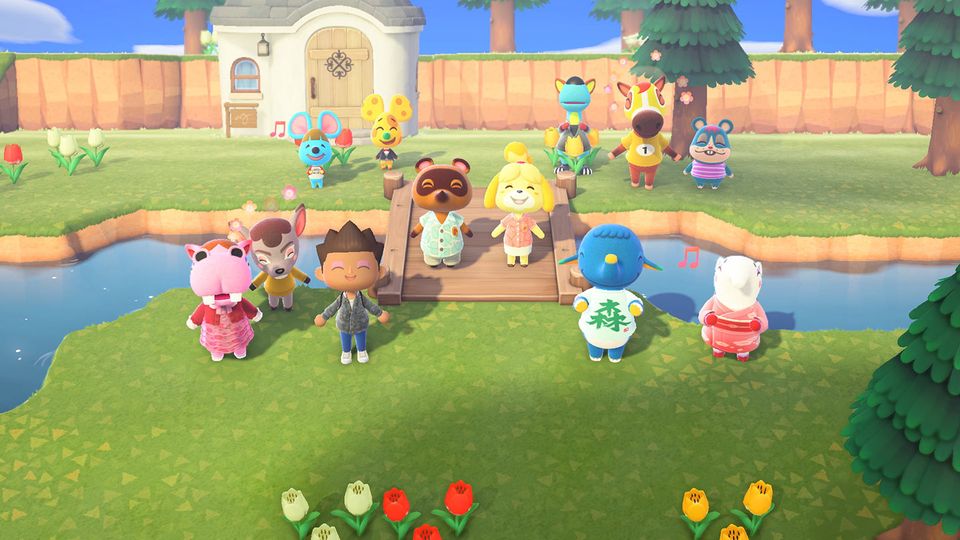 Much of the early stages are spent ferrying to and from the workbench in Nook’s Resident Services tent. Unlike Wild World and Animal Crossing: New Leaf, there are no shops to sell seashells from the sea shore. Everything must be made from something. Trees drop branches, which can be crafted into flimsy shovels and nets. Chopping trees with a stone axe gives hardwood, softwood, and regular wood, and hitting rocks makes stone, clay, or even a gold nugget fly out onto the ground. Taking the flimsy tools and welding them to iron nuggets results in proper tools. The crafting turns the surroundings into environmental elements rather than scenic set dressing, and once you’ve tested your metal/mettle, Nook will award you the title of Resident Representative.

What does that entail? Well, it means the player picks where new buildings and services are placed—a responsibility that’s old (hard) hat for New Leaf players—and finds the resources to make them. But the crafting is so central to New Horizons that every choice I made on my island was the product of careful consideration. And it also drove me to explore my island’s, pardon the pun, nooks. Parts of the island are inaccessible from the get-go. As the player progresses, they earn the vaulting pole and the ladder, which take them across rivers and cliffs to reach the rest of the island.

This isn’t to say that the island is a dead-end zone. Nook Miles, accrued through actions on the island like hitting rocks, planting flowers, and digging up fossils, can be turned into Nook Miles Tickets. Via Dodo Airlines—manned by two bright blue dodos, Orville and Wilbur—these trips take the player to a randomised uninhabited island, offering a new lot of resources to be looted. Mystery islands are crucial to collecting enough materials to build up the island in its initial stages, but they also hold new fish and bug species to take home to the museum. And, they sometimes have another character wandering around while on their holiday, and chatting to them can encourage them to relocate to your island. 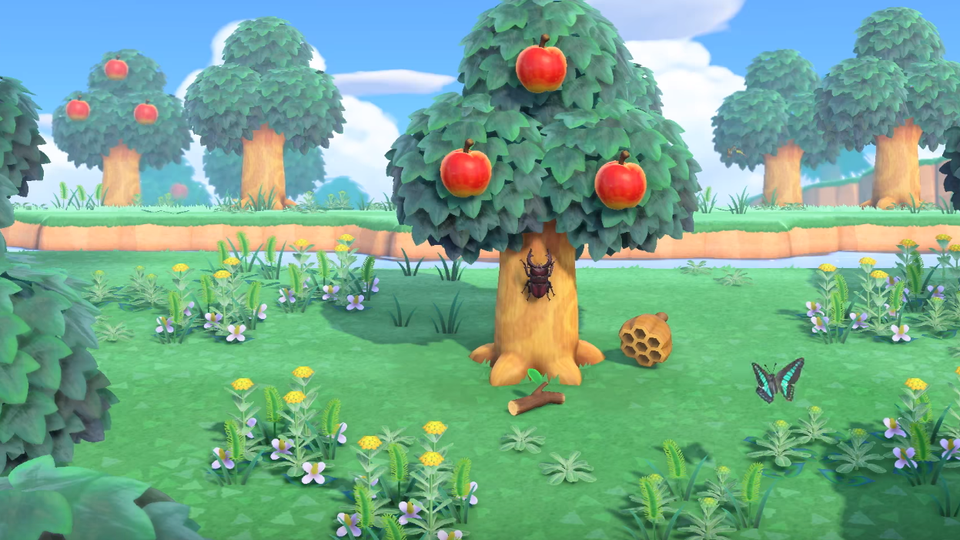 Even when the island expanded, with a museum, shop, tailor, and new residents, I felt no impetus to build the Petronas Towers on this paradise. Part of this is down to how pretty the game is on the Switch specs. The hardware offers Nintendo the tempting possibility of making Animal Crossing whizzier than ever, streamlining construction and upgrades like you could be the Swiss Family Nookington. But the developer doesn’t bite, and instead invites you to watch the world go by. Leaves rustle in the breeze, different animals leave different paw prints in the sand, and hauling a fish out of the ocean shows the creature in almost grotesque definition, when compared to the soft shades and rounded edges of the rest of the game. These photo-realistic models steal the spotlight in the museum—its fossil wing dramatic and gloomy, its aquarium deep blue and serene, and its insectarium airy and light. Collecting is far and away my favourite thing to do in Animal Crossing, and the exhibits truly come to life in the stark contrast between the toony world and its scaly wildlife. Why clutter it all up with skyscrapers?

And there are the tiniest details that show Nintendo has pulled out all the stops when it comes to this social sim. Voices echo in empty rooms, raindrops pitter-patter on the canvas, and residents will relax, chow down on doughnuts, read, do yoga poses, fish, water flowers, and catch bugs. It makes it feel like a real island, and, though I wasn’t so sure about the idea of transforming the land to my own ends, the possibilities captivate me.

On my island, there will only be red and orange flowers, and an orchard for the fruit trees. All the other trees will be cedars, and the river will lead into a delta in the south of the island—a perfect spot for a fishing trip. My house will be in the north of the island, which is (coincidentally) the highest point. I’ll have a big open space that will be a stage for themes, like a barbeque, a rock garden, or a band. In addition, I’ve made sure that my home is welcoming, and I know the cypress bathtub is a statement piece. The ideas thrill me, and though I’m only laying the foundations, I’m excited to show visitors the work-in-progress. 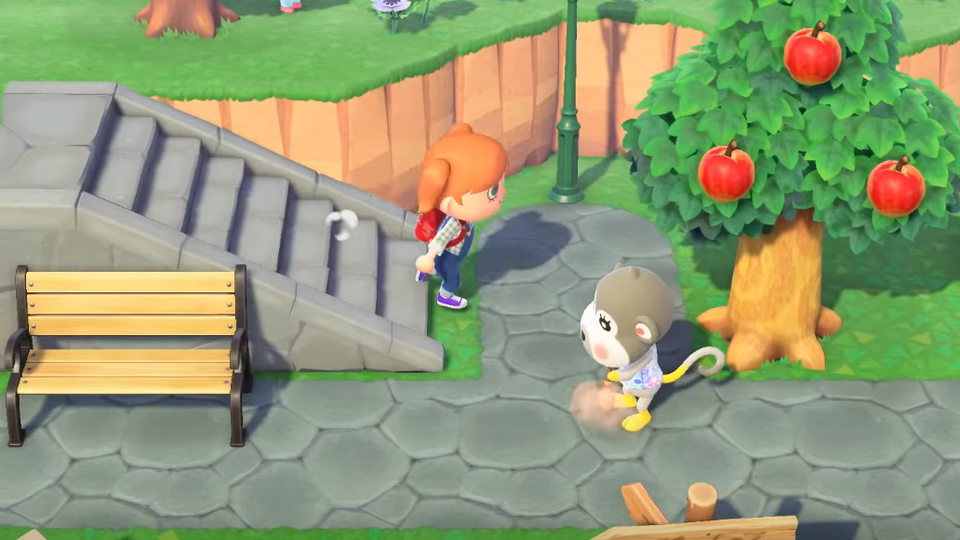 I never cared for the interior design nor the town’s grade in the previous games, but by beginning with a clean (if weedy) slate, I see what the island could become. It’ll take a while, but that’s half the fun. New DIY recipes from Tom Nook, the other residents, messages in bottles, and moments of inspiration will help me get there, though it is a little disheartening when I unlock the perfect kitchen counter but I don’t know the recipes for its constituent parts. As I chat to characters and chop wood, the Nook Phone tracks my progress, awarding me Nook Miles once I’ve placed ten pieces of furniture on the island, for example. Nook Miles are also used for new items as well as getaways, and Nook Miles+ lets you stack achievements for double or even triple the returns.

Nook Miles+ is a tricky one, as the optional objectives are things like “chop down a tree” or “plant flowers.” Usually, I’m shooting presents out of the sky and selling sea shells through routine, but if I know I’m only 200 Nook Miles from what I want to buy, I might plant a bed of flowers, even if that isn’t included in my aforementioned island vision. These achievements keep the game ticking along, the player engaged in their island, and are a reliable source of Nook Miles, but they contrast with the creative and purposeful pace of New Horizons. Moreover, I do feel odd rocking up to an anonymous island, picking it clean of its natural bounty for the benefit of my own piece of Eden, and never seeing it again. Maybe in this world “ecological collapse” is as foreign a concept as a Bond car that runs on biofuels.

All of which leaves me with a sense of déjà vu. It’s 2020. We are only three months into this year, and there’s a long (bumpy, lurching, and memeful) road to recovery ahead of us. If we were in a swirling blizzard, Animal Crossing: New Horizons would be a tiny tea light whose flame flickers but never extinguishes. It’s a source of light and warmth, despite it all, and it’s doing its best to comfort us. This island is a haven. We’ll share it all together.

Animal Crossing: New Horizons is beautiful and peaceful, offering safe harbour from the stresses of everyday life. There’s so much to do and so much to see, so what’s wrong with making a back seat?
9 Crafting revitalises the core experience Possibilities are endless Welcome respite from real life The best the series has looked for a long time