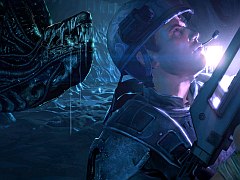 Great news everybody: this is the Aliens game we’ve been waiting forever for. Sadly, that’s in technical terms only: announced in 2006, we’ve waited a long time to see if Colonial Marines can live up to its promise. It can’t. Most distressingly, the three (!) development studios involved seem to have no idea what makes the franchise itself so compelling.

Instead what we have is yet another attempt to chase the Call of Duty dollar. Colonial Marines is an uninspired, cynical cash grab with Syd Mead’s and James Cameron’s legendary designs propping it up.

Even that veneer is poorly implemented. Graphically the game looks awful – like a Doom 3 mod, all shiny surfaces, flat textures and static environments. Explosions look like something out of a PS2 game. The cutscenes are rendered at a resolution unfit for human consumption. And the animation of the Aliens themselves is laughable: they often run at you on two legs, looking for all the world like they want to give you a hug.

When I played it, Xbox 360 controller in hand, another member of the VideoGamer team looked on and remarked that there was always the PC version, they supposed.

It was the PC version. The actual 360 build is probably what Gorman saw on the marine cam monitors shortly before he totally broke down. (Speaking of which, it is remarkably unfinished. See the end of review for more details on that, but the short explanation is that if Ripley and co had encountered this many bugs on LV426, none of them would have made it out alive.)

It would be easy to shrug and say – ‘hey, it’s been in development for years. Of course it looks bad. Of course it’s, ahem, rough around the edges. It’s the gameplay that matters.’

Fair enough. Shame then that said gameplay is laughably simplistic.

As in CoD, players will spend most of their time following fellow marines through a series of linear environments, waiting for other soldiers to open doors for them or fighting incessant waves of Aliens. This linearity is no doubt in aid of the story which, while canonical – you play Marines sent to answer the Sulaco’s distress call post-second film – is utterly nonsensical and filled with tiresome grunt jargon.

There’s no conserving ammo, no sense of an overwhelming force, and as such very little tension: a crushing blow in a game where you’re supposedly fighting the universe’s most dangerous creature. The Aliens pose little threat, and are usually only a – sigh – QTE away from being rebuffed. They never really form enough of a swarm for players to take them seriously. Worse still is the insane decision to have players square off against a platoon of Weyland-Yutani mercenaries. Yes, in a game called Aliens, for a large chunk of the game you’ll be shooting at humans. Humans that are, incredibly, dumber than their insect counterparts.

Even worse than the boring gunplay is the upgrade/XP system which pops up in the campaign as well as multiplayer (they’re persistent). Find a hidden item or level up and a big fanfare kicks off, which kills the atmosphere faster than the explosion at the end of Aliens.

Co-op – which Gearbox made so much of in the game’s marketing message – was, before we played it, reasonably expected to represent the true essence of the game. After all, the films are about groups of people banding together to overcome exceptional odds.

In actuality, it compounds all of the problems, reinforcing just how shoddy the enterprise is. Instead of building a game around the cooperative nature of the franchise, Gearbox has attempted the inverse, shoehorning the co-op stuff into the torturously prescribed campaign.

That it doesn’t fit is obvious enough from the dialogue. Squad leader Cruz informs single players that the two of them (as in, the player character and his AI sidekick from the campaign) should get a move on. That same dialogue is repeated in co-op, despite there being more than two people in the room.

We wanted Left 4 Dead in space, and what we got was a CoD wannabe with four players. Rather than helping each other, you’re just another gun in an environment that can barely handle one, let alone two or more. Move too far down the corridor, and your squad will be magically zapped next to you. Shocking when you consider that getting separated is the single worst thing that can happen in the fiction of the movies. Going by these rules, if only Ripley had moved forward down that air vent faster, Gorman and Vasquez would have respawned right next to her. Oh well.

With the single and co-op modes proving utterly underwhelming then, there’s only the multiplayer mode to fall back on. As well as standard TDM, there are modes like Survivor (see how long you can hold out) and Escape, which is like a stripped down version of Left 4 Dead’s Versus mode.

These gametypes won’t keep you playing long, but they are at least entertaining in a way the campaign can never hope to be. Most of this is down to the fact that the races’ strengths and weaknesses can actually be exploited by intelligent players. Here, the customisation/upgrade mechanic makes sense, and there is fun to be had for those that stick around long enough.

A half-decent MP mode isn’t enough though, and as a package this is woeful. What is most frustrating is the constant self-sabotage: every time the game does something right, it immediately then ruins it. A section of the game takes place in the derelict ship from the first film. There’s a wonderful sense of intimidating scale here – think Kane lowering himself into the same ship. And then, as you contemplate the space jockey, a group of brainless PMCs run in and start shooting.

Pre-release, Gearbox strove to convince us they understood what makes Aliens so special. In places, they do get it right. Using the motion detector is undeniably cool. The Pulse Rifle shrieks beautifully. And exploring the Sulaco or Hadley’s Hope will give a sliver of wish fulfilment to fans of the movie. But then, those are the easy things to get right.

Tested co-op gameplay through various levels on 360, on both normal and the hardest difficulty.

It should be noted that the 360 build we played (retail, promo code) was much buggier than our PC review build. Stuttering audio, idle enemies and floating geometry were all observed more than once – and these were on top of issues such as NPCs standing in front of turret fire or severe collision problems. While these issues may be patched they’re still unacceptable. If you have the choice, go PC.

I have some bad news...
3 Multiplayer is OK Utterly uninspired Technically subpar