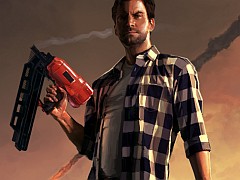 Poor old Alan. Stuck within the confines of his own script, things definitely aren’t working out for the troubled author. After penning episodes of television show Night Springs (think Twilight Zone), the slick-haired wordsmith is now entirely engulfed by his self-produced web of clichés and emotive language. Alice, his estranged wife, is still missing, and with little idea of his whereabouts, or the motives of newfound adversary Mr Scratch, Mr Wake has definitely got himself in quite a pickle.

Dumped in America’s Deep South for this standalone spin-off, the brooding nature of the original game’s claustrophobia is quickly banished. Although sizeable, locations are sparingly populated, a factor which heightens the sense of isolation. But developer Remedy Entertainment forces you to play out the same set of events three times, each with minor differences, justifying its narrative with a pretentious but viable explanation of a time loop. Unfortunately, three strikes at the same plot doesn’t make for an engrossing game.

After completing each task once, everything becomes dull. The rewriting of history takes place in three locations – a motel, an observatory and a drive-thru cinema – but they lack any sense of interest. You’ll soon be as stuck in the Groundhog Day experience as Alan is, while the lack of progression cripples any sense of enthusiasm. Objectives continually force you into trudging towards switches or specific items, all with little explanation. Even the most seductive title would struggle to liven up this plethora of insipid tasks, so it isn’t to Alan’s advantage that it plonks you in the same scenario on multiple occasions. You can see Remedy have tried to produce a quirky, thought-provoking adventure, but American Nightmare quickly becomes bogged down by the developer’s attempts to add a Tarantino spin to a world originally crafted out of subtlety and nuance.

Deviating from the original game’s path unearths a number of problems. Combat is entertaining, but it’s too simple to stand on its own merits. Like the previous title, you scrub the darkness off enemies (dubbed the Taken) by bathing them in the light of Alan’s trusty torch, and send them packing with a few well-placed shots of your gun. With the emphasis on action, expect to sprint through canyons carrying assault rifles, combat shotguns, and Biblical Romans’ favourite, nailguns. Reinforced by a cache of flares and flashbangs, Alan’s arsenal is more than equipped for the hordes of nasty men who give chase.

Appearing out of thin air, the Taken attempt to outnumber and suffocate the player. Early on in the game it’s implied that running away can be a good idea, but such cowardice rarely needs to occur. From the duplicating splitters to the chainsaw wielding giants, the locals have more than a touch of Resident Evil 4 about them. In a nice nod to the original, though, some monsters even manifest themselves within a flock of birds, landing quickly for a surprise attack. In the dingiest locations, spindly arachnids fancy chowing down on Alan’s shins, representing the most hilariously feeble menace I’ve seen since the original’s scary puddles.

The accessibility of the combat ensures it’s never challenging, and Remedy waits too long to introduce the behemoths who actually pose a threat. If a group of nasties manages to swarm you properly, you’ll be hacked quicker than Wayne Rooney’s answerphone after a night eating chicken at ‘Grando’s’. Some kind of close-quarter defence would neutralise the problem, but such forward-thinking is nowhere to be seen.

Alan is a multi-tasker, and as any man knows, problems soon arise when the brain is taxed beyond the realms of “play game, scratch arse.” Somewhat appropriately, you’ll meet Mr Scratch throughout the game’s four-hour runtime. He is the darkness to Alan’s light, a conflict that forms American Nightmare’s main premise. In true doppelgänger style, Mr Scratch represents a crazier, more up-for-a-laugh Alan, whose humour mostly revolves around the brutal mutilation of tortured victims. What a card!

Mr Scratch’s appearances are sporadic, and he’s never significantly developed as a villain. He goads Alan via a number of pre-recorded tapes, but after the first execution, his antics become less shocking. Each message drones on for far too long, failing to effectively place the character within the plot.

For all of your antagonist’s cocksure taunts, the oddest anomaly I witnessed was Alan’s checked shirt getting caught by a gust of wind whilst indoors. This extra-terrestrial movement didn’t only steer my attention away from the television, it lead me to a test of extreme dissection. What does the black and white pattern mean? Is this a metaphor for Alan’s inner conflict? Does he support Newcastle United? Did he once tirelessly campaign against apartheid? Basically, I wasn’t hooked by the on-screen action; Mr Scratch’s interludes are far too predictable, and never provide a full explanation for his motives in the game.

The lack of clarity throughout Alan Wake’s American Nightmare isn’t helped by the protagonist’s charismatic meltdown. He still feels the need to point obvious things out, and reads from each of the 53 collectible manuscripts with a lifelessness that’s infectious. I found myself dreaming of Nathan Drake and Keanu Reeves, only to snap back to reality with a conglomeration of the two staring back at me. His movements are equally as perplexing, as he seemingly has some kind of twitch we haven’t been made aware of. Alan’s chin disappears into his neck, his head jaunts at oblique angles, and when he runs it’s as if he’s a child trying on his first pair of ‘smart’ shoes.

As frustratingly vanilla as this game becomes, there are genuine moments of interest. The darkness often shows itself as a poltergeist, flinging cars and diner signs around with great efficiency. Towards the conclusion, a stint of ripped-jeans rock plays over each battle, offering a breath of fresh air for a quest that drowned a long time before.

Away from the main campaign, a Fight Till Dawn survival mode places you in 10-minute challenges to outlive dusk. A co-op element would have been nice, but the arcadey addition does manage to squeeze some more playability out of the 1200 Microsoft Point title.

Whilst ambitious, the promise in Alan Wake’s American Nightmare never materialises. The elementary combat system is entertaining, but ultimately overshadowed by a hopelessly contrived plot. Mr Scratch’s presence could have been something special, and it’s regrettable that his performance is throwaway. As with the rest of the game, a lack of cohesion and clear thought from Remedy ensures American Nightmare feels like a missed opportunity. The time-loop experiment is an intriguing idea, but restricts the game’s design. Alan’s Wake’s first spin-off never manages to outshine the intricate nature of his original outing, and the author has lost sight of the game’s dominant genre.