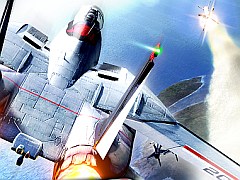 Afterburner was the very first arcade game I completed, and the only arcade game I’ve completed. Not that I was any good at it. My feeble nine-year-old brain was no match for the lightning fast jetfighter action, so I had to counter the onslaught of enemy planes with my [parents’] 10p coins. I can’t remember how much my brother and I pumped into the machine, but in today’s money we’d probably be able to buy SEGA. That’s how bad I was. Despite this, Afterburner is a game I’m understandably nostalgic about, so the release of Afterburner Climax, the modernisation of the classic arcade original, on Xbox LIVE Arcade and PlayStation Network, got me more than a little excited.

Climax, originally released into arcades on the Lindbergh hardware back in 2006, took the classic title and spruced up the visuals. In terms of gameplay it still required you to shoot down enemy aircraft using missiles and your rapid-fire gun, using an aiming reticule to mark numerous targets before taking them out in quick succession. Here your grouped attacks earn you combos, with the game allowing a tiny gap between one successful kill and the next before starting back at zero. High score chasing is the name of the game, and combos are key to ranking high on the scoreboards.

Helping you gain those high scores is the Climax meter, filled up steadily as you play to eventually grant you a slow motion target shooting sequence. Once activated your aiming reticule increases in size and missiles become unlimited, allowing you to rack up huge attack combos and earn mega points in the process. Combine all of the above with a breakneck pace and Afterburner Climax is an exhilarating experience that certainly rekindles memories of the original and is one of few modern arcade games to hit the current set of consoles.

The problem with Climax, compared to the likes of SEGA’s other modern arcade to console game OutRun 2, is that it feels a little lightweight. Part of the game’s replay value comes from branching paths, but this is nowhere near as developed as the system in OutRun, providing only a few branches to explore. The shooting also has none of the depth of OutRun’s powersliding. A fancy barrel-roll move gives a slight illusion of complexity, but it’s more of a show-off move than anything that adds considerable gameplay to the experience.

SEGA has created a blisteringly fast game, and as such you don’t get long to take in the scenery, but the backdrops are largely quite pretty. It’s a shame that more dramatic locations aren’t used more often, such as the interior of a base complete with cool laser beams shooting out of the walls, but there’s something rather nice about soaring through the blue sky even if it does get a bit samey. It must be said the music does get quite annoying after a while, but if you’re into the kind of tunes SEGA always includes in its arcade games, you’re in luck.

In terms of extras over the arcade game, you obviously get online leaderboards so you can compare yourself to the best players in the world and a Score Attack mode, in which you have unlimited credits and simply need to work your way through the stages scoring as many points as possible. More interesting is a series of unlockable game tweaks, called EX Options, that let you alter the arcade experience. These range from giving you infinite credits to more interesting stuff, like changing the length of the combo window and the size of your targeting reticule.

Afterburner Climax is a great, and reasonably priced way to play the arcade game in the comfort of your own home, but it’s a remarkably simple game that will leave some people wanting a lot more. There’s skill required to earn really high scores, but the gameplay simply doesn’t have the depth required to be called a classic.

Afterburner Climax is a great, and reasonably priced way to play the arcade game in the comfort of your own home, but it's a remarkably simple game that will leave some people wanting a lot more.
7 Looks great Fast paced arcade action Quite simple Extremely brief