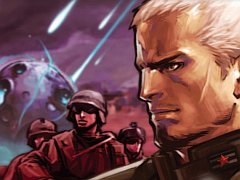 We never played rock, paper, scissors at school. We were too busy practicing Street Fighter 2 moves on each other in the playground to give that boring game a chance. But somehow the bods at Japanese developer Intelligent Systems has taken that simple child’s game and turned it into one of the most addictive strategy war video games ever – and we love them for it.

Advance Wars: Dark Conflict is in fact the fourth game in the series and the follow-up to 2005’s Advance Wars: Dual Strike, also on the Nintendo DS. It works like this – you and your opponent start off with a number of units – ground, sea and air. You then take it in turns to move them about a grid, across different land types – road, mountain etc – and attack enemy units until there are none left. That’s the essence of Advance Wars in one neat paragraph. Simple, huh?

Not so. The key to understanding how Advance Wars works is in the rock, paper, scissors game. Each unit has a number of strengths and a number of weaknesses. So, for example, a Bomber will decimate ground units with its bombs, but can’t attack air units. An anti-tank unit, one of the new units introduced in the game, is great against tanks, as you’d expect, but rubbish against anything else. You need to work out which unit is best suited to tackle each enemy unit, just like wrapping paper around stone.

There’s more to it that that of course, but that’s the crux of it. The gameplay is strangely addictive – simple at first, but as you play through the game’s lengthy campaign you’ll gain access to new units and learn more complicated strategy. For example, certain units, infantry and motorbikes (a new unit, basically infantry on bikes), can capture enemy cities, unit producing factories, airports, ports and enemy headquarters (apart from destroying all enemy units, capturing the enemy HQ is the only other way to win a match). And this is just the tip of the iceberg. It all amounts to the most complicated match of rock, paper, scissors ever.

This will all be old news to series veterans. For you, all you’ll be interested in is the changes Intelligent Systems has implemented with Dark Conflict. Gameplay wise, probably the biggest change is that the role Commanding Officers (COs) play in battle is much less significant. Where before they could use super powers to completely turn the tide of battle once they had been “charged up”, now they have much less of an impact. The ability to “double-team” an opponent, effectively taking two goes in a row, has been removed. Now, COs can merge with units on the battlefield, raising them to Veteran status and “buff” nearby friendlies within the CO-zone. The CO zone grows as the battle rages, and when it fills the entire screen you can initiate the CO power, for example boosting the mobility of direct attack ground units by two, or giving all friendly units three health points.

All units can now level-up three times as they defeat enemy units, up to the maximum Ace level (if a CO joins a unit it gains the ultra powerful Vet status). We’ve mentioned some of the new units above, but there are others. The super-powerful ground unit the War Tank has replaced the Neo Tank and the Mega Tank. The Black Boat, Stealth Bomber and Black Bomb have bitten the dust too. But we’ve now got the Anti-Tank – does exactly what it says on the tin, Flare – a tank which can fire off a flare which removes fog of war, Missile Boat – can attack other naval units and transport troops, Fighter – medium powered air unit, and the powerful Ship Plane, to play with instead. Add to this the new Mobile Workshop, which can build temporary airports and ports, and you can see that Advance Wars’ unit roster has undergone sweeping change.

On top of the CO and unit changes, dual screened battles have been scrapped, and, as a result, so have multi-front battles. This means things have been simplified somewhat, which we think is a good thing. Dual Strike got a bit unwieldy with battles often spiralling out of control over the DS’s two screens. Keeping battles to the bottom screen, trimming the unit count and, as a result, putting the emphasis more on strategy than simply overpowering the opposition by pumping out more units is a step forward for the series.

The gameplay isn’t the only thing that’s seen a shake up. The feel, look and tone of Dark Conflict is completely different to what has gone before. Advance Wars has always been one of the DS and GBA’s more hardcore games in terms of gameplay, but in terms of story, it’s always had a similar feel to the original Transformers cartoon, with a bouncy, happy, inconsequential “nothing can damper our spirits” outlook on war. With Dark Conflict, the setting and premise of the game’s story is much more grim, but the personality of the characters and the dialogue (oh god the dialogue) is still stuck in the realm of Saturday morning television.

The key is in the title – Dark Conflict. The game is set in a post-apocalyptic world, where meteors have decimated 90% of the population and created a dust cloud which blots out the sun. The graphics have been given a more adult look, with more battle animations and less Japanese-looking characters. It rekindles memories of Australian classic Mad Max. Bandits are causing havoc on pockets of survivors. Food and water is scare and, now that a new virus is ravaging through the youth population, there’s little hope. You’d think then, that the game’s main characters would be a tad depressed. Not so.

The dialogue is as cheesy, cringe-worthy and frankly embarrassing as ever, despite the more grown-up setting. Drakov, the leader of the raiders, is laughable – “Gaargh! Grrraaah! Har-har-har!!! Gaaaaaarrrrgh! Gaaaaaarrrrgh! Har-har-har!!! Prepare for the end! Gaaaaaarrrrgh!”. Captain O’Brian, the righteous leader of what remains of the Independent Legion, is a do-good father figure in the Captain America mould. The game’s central character, the former military cadet Ed, is told to never give up hope during every (lengthy) cutscene. It’s like the cast of Pokemon have found themselves in the next Terminator movie.

Once you’ve worked your way through the long, often extremely difficult, campaign you’ll want to play against other human players (the AI sometimes makes baffling decisions). And it’s here that Dark Conflict comes into its own, with some of the best multiplayer features seen in a handheld game. You can play four-player multiplayer wirelessly or on the same console, as you’d expect. But you can also play using the Nintedo Wi-Fi Connection and go online against friends and randoms, and even use the DS to talk. The best thing is it all works, with quick and easy set-up and almost zero lag. Online play is a tremendous addition to the series, and one that really adds the crowning touch to an already superbly addictive strategy franchise.

In many ways the single-player campaign feels like an elaborate tutorial for the multiplayer side of things. Advanced players will soon grow tired of the AI, which makes the much tougher side-missions which pop up sporadically a welcome addition. Because the gameplay has been simplified somewhat, newcomers should find Dark Conflict easier to get into and more rewarding than previous iterations. But don’t let that put you off if you’re a series vet – less, as they say, is sometimes more.

The new, grimmer look of the game jars with the classic cheesy Advanced Wars dialogue, and the Jetix-esque soundtrack might annoy some after a while (for the record, I think it’s absolutely banging) but Dark Conflict remains one of the best games on the DS, is perfect for a lengthy commute, works brilliantly online and, for us, comes out on top compared with Dual Strike. This is one strategy war game you’ll gladly wait your turn for.

Dark Conflict is one of the best games on the DS, is perfect for a lengthy commute, works brilliantly online and comes out on top compared with Dual Strike.
8 Addictive strategy Great multiplayer Streamlined gameplay Cheesy dialogue doesn't fit with the darker tone

Sequel to the hugely popular strategy game from Nintendo.

Sequel to the hugely popular strategy game from Nintendo.