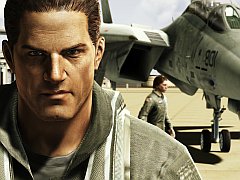 Boys have always had a fascination with planes. As kids, we’d hold our arms to either side and roar about the garden. We’d jump off furniture, mimicking take off. We’d bank, circling around swing sets; we’d swoop, ducking under climbing frames; and we’d weave about the legs of grown-ups shouting “NEEEEYYYOOOOWWWWW”. We’d envisage imaginary opponents, chasing them to a barely audible background of “calm down Benjamin! You’re going to hurt somebody! Again!”

Ace Combat: Assault Horizon has the ability to make you feel just like this – more so, in fact, as an epic orchestral score punctuated with thunderous guitar licks doesn’t follow your every move when you’re zooming round your back garden. But much like tearing through your parents’ garden parties in the summer, Assault Horizon comes with its own punishments, and it can leave you whining about how “unfair” it is in a similar way.

The plot paragraph, then: things revolve around one William Bishop – a pilot with a chiselled jaw and bulging pair of biceps. The guy relied upon to save the day. Like Call of Duty, though, you’ll play as several other characters along the way, including a helicopter pilot codenamed Shooter1, and the blonde-bombshell bomber pilot, Jan. The bad guys are Russians, obviously, the most lethal of which known as Markov, or ‘The Shark’, due to the fact he pilots a jet with a set of jagged teeth painted along the nose. Throw in some betrayals, defectors and a dictionary of army-esque buzzwords, and you have the perfect recipe for a generic military romp.

It’s fairly forgettable from a narrative perspective, but it moves things round the world successfully enough, giving all the dogfighting some context. Aerial combat, the bread and butter of the experience, is a far more engaging experience than the series has been able to offer up until this point. It’s more cinematic, crucially, brought to life with an impressive range of whooshing cameras, collapsing architecture and explosions. Lots of explosions. Die enough times, and you’ll become aware of the tricks used to orchestrate these set pieces – enemies that follow a set path to certain areas once they’ve been locked on to – but this fails to dampen the excitement.

Get close enough behind an enemy and the reticule encasing him will flash, prompting you to press both bumpers to engage close-range assault mode. Here, the camera zooms in, snapping to your target. The enemy aircraft will still flit about the screen trying to lose you, however, but the challenge is in keeping your reticule over it for long enough to lock on. Once done, pressing B will send your missiles screaming through the air towards it. Land the hit, and the target will explode, the camera zooming to the craft mid-explosion, debris hurtling through the sky in slow motion.

This is as satisfying as you might imagine – especially after a drawn out chase through the sky to do so – but it stems from more than just an appreciation of slow-mo and fancy camera work. The game simply handles well, responding to your inputs in a way that makes you feel like a less goofy version of Tom Cruise in that film with the jets and the volleyball. Whacking both bumpers at a crucial moment and watching the camera and explosions do their thing is a great feeling right up to the end of the game. I mentioned the soundtrack at the start of my appraisal, but allow me to re-iterate what an important role it plays in things. Grandiose strings, heavy guitar riffs and the odd vocal motif all contribute to that epic feeling.

It’s not just opponents in the air you’ll fight either, you’ll frequently be required to take out ground troops, assisting little dot-like allies from above. During these sections, you can initiate ASM runs (by pressing both bumpers when green diamonds on the HUD are within range), where you’ll take a slower route through a set path lower to the ground. It’s all about accuracy here, and you don’t want to miss any targets as you’ll have to do the whole run again should you miss any.

Variety is something the game manages fairly well. Even if you’ve played something similar in the countless war-based FPS games out there, Assault Horizon certainly benefits from the frequent changes in pace. When you’re not darting about the heavens in fighter jets, you might find yourself perched behind the turret of a helicopter, or raining hell down from above in the equivalent of Modern Warfare’s AC-130 levels. While the latter is enjoyable enough, the helicopter levels are quite the opposite, plagued with awkward camera angles and unwieldy controls.

Despite mixing things up quite successfully, it doesn’t stop the game being a right old slog at times. Missions are slightly too long – some approaching an hour with the repetition of more challenging checkpoints. For the majority of this time, you’ll be taking down the same enemies and repeating the same manoeuvres. Just when you’ve cleared your radar, it bubbles over with red blotches again, and you’ll have to repeat the whole process again. Bad checkpointing doesn’t help the problem, so when you die you’ll have to repeat large sections of a level. While the game as a whole is pleasantly diverse, individual levels can become monotonous.

The campaign lasts around ten hours, with an appropriately epic sky brawl to round things off. Once done, there is of course multiplayer to give the game some legs. This takes the form of four separate modes: Capital Conquest (a team affair involving attacking a ground-based enemy HQ), Domination (again, team based, but capturing bases instead), Deathmatch (which needs no explanation), and co-op Mission mode. It’s a well rounded selection, with a familiar ranking system tying everything together. As you score kills, collect points and rank up, you’ll unlock new crafts and call signs. Deathmatch is particularly good fun; dogfighting with real players is far more entertaining than AI foes, requiring a cool head and well thought out escape plans. Impressively, the cinematic quality isn’t lost in the transition from single-player to online, either.

Assault Horizon can be a frustrating experience at times, but when things are going to plan – when you’ve waited to the very last second to pull off an evasive manoeuvre or taken out two bogeys at once with a few well placed missiles – you’ll be left with an intense feeling of satisfaction. It’s simply a very cool game, and Namco Bandai should be praised for taking a series that some would have considered unapproachable a few years back, and making it relevant again.

Assault Horizon can be a frustrating experience at times, but when things are going to plan you'll be left with an intense feeling of satisfaction.
8 Epic soundtrack Great controls Helicopter missions Can become monotonous