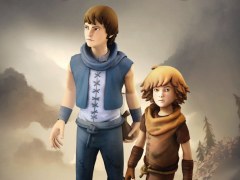 Brothers comes to new-gen consoles after being something of an indie darling on old consoles way back in 2013. It is essentially the exact same game, but running in 1080p and at nice smooth frame rate.

An adventure in which you control two brothers simultaneously, each mapped to an analogue stick and shoulder button, the whole experience is unlike anything else I’ve ever played. Sure, it’s got a few control quirks, mostly around how my brain got confused every time the brothers crossed over to different sides of the screen, but it mostly works really well. The puzzles are simple but the cooperative play is neat and a big step up from what you have to do in most games that tout co-op as a key feature.

The story is rather lovely, and the depiction of the relationship between the brothers is superb, but for me the environments and art direction are the real stars. Although the game could have looked even more incredible if it had received a new-gen makeover that did more than smooth out the rough edges, it’s still a stunner: hillsides strewn with fallen giants, villages full of frozen inhabitants, serene boat rides through a frozen wilderness. The world is wonderful to travel through.

At 3-4 hours in length and without any major new-gen enhancements (a director’s commentary video and the full soundtrack have been included) some might baulk at the £14.99 price, especially as it only cost 1200 MS Points (about £10) on Xbox 360 two years ago. It’s a fair enough criticism, but this is now the best way to play the game on consoles and it’s very much worth playing if you’re yet to experience it.

Brothers: A Tale of Two Sons could be this year’s Journey. Just like the wonderful PlayStation exclusive, it’s a short but incredibly meaningful adventure that manages to present its storyline without relying on traditional forms of dialogue. The characters do communicate with each other, but only in a garbled, nonsensical language that’s somewhere between Lebanese and Simlish. Despite this, you’ll find yourself understanding exactly what they’re trying to say and empathising with them all the more as a result.

I was initially a little peeved when I realised the game doesn’t support co-operative play, despite appearing to be so perfectly suited for two players. Instead you control both characters yourself using a different analogue stick for each brother, and as the puzzles you solve are usually quite straightforward, the challenge comes from trying to direct both brothers through different tasks at the same time.

It’s very satisfying when this goes to plan: Big Brother will rush to pull a lever while Little Brother distracts an enemy before slipping through some railings to escape. With that said, even when you get towards the end of the three-hour adventure, the controls still don’t feel entirely natural. I was forced to stop and get my bearings more often than I would have liked.

Brothers is a game that relies on the player’s understanding. After briefly explaining the setup, it prefers to avoid the abundance of tutorials that other titles rely upon. Big Brother will point you in the right direction if you get lost, but for the most part, you’re presented with challenges and left to get on with it. Fantastic.

There’s times where it all suddenly clicks, be that how the hang glider works, or a boat, and you’ll find yourself grinning like an idiot – such moments would have been lessened by a helpful popup. Admittedly the opposite can also be true, but I’ll happily trade 10 minutes of frustration for those brilliant instances where everything just slots into place.

The best way to play the game on consoles and it's very much worth playing if you're yet to experience it.
8 Superb concluding chapter Gorgeous art design Touching story Little enhancement for new-gen

Brothers: A Tale of Two Sons

A man, clinging to life. His two sons, desperate to cure their…

Brothers: A Tale of Two Sons

A man, clinging to life. His two sons, desperate to cure their…