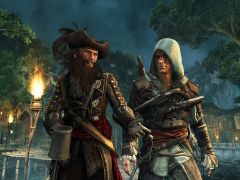 Editor’s Note: The below review is based on the PS4 version of Black Flag. Having played the PS3 version for around three hours in comparison, players should be aware that while mechanically identical, the following differences are observed:

Many nautical miles better than Assassin’s Creed 3, Black Flag is somewhat of a return to form for a franchise stalled. For all its renewed appeal, however, it still suffers from being based on systems and mechanics that looked tired in 2009. It may be on next-generation systems, but this is last generation’s game.

Grumpy old Connor Kenway has given way to his grandad, Edward, who’s responsible for more piracy than Kim Dot Com. His drive isn’t revenge, nor legacy or destiny: it’s money, and is all the better for it. His flippant attitude fits nicely with the jaunty, sun-drenched West Indies setting and constant trinket-finding. Whether climbing palm trees in Kingston or directing shanties from the bridge of your ship, it’s far easier in its skin than part 3.

Naval combat is the highlight. It’s based on broadsides and positioning, but there’s an intuitive element to it that rewards good strategy, and encounters themselves are tense and engaging. Upgrading the vessel is key to both mission progress and acquiring real money. Whether it’s looting, fighting, or raiding coastal forts, it’s at sea where the game really excels.

On land, it’s (literally) the same old Creed. There’s a certain compulsive appeal to it of course, just like Ezio’s trilogy; you’ll want to collect the seemingly inexhaustible amount of things on offer, even if you know that what you’re doing isn’t technically good or even interesting. You just don’t care; it’s the gaming equivalent of fast food.

There’s only so many times, however, that you can tolerate the poorly-defined stealth and terrible AI. Eavesdropping returns, and is as poor as before, and most missions devolve into ‘follow the man, kill the man’ repetition. Your adversaries are also too dumb to notice you most of time (you can still pull four guards into the same haystack), mitigating the thrill.

And yet you’ll want to play on, especially on PS4, where the superb weather and particle effects, as well as improved draw distance and high-res textures, bolster Ubi Montreal’s great environmental design and free-running pathfinding. Flawed yet addictive, this Creed needs to change.

Flawed yet addictive, Assassin's Creed may be in need of a change.
7 A return to more light-hearted fare. Excellent world-building and naval combat. Repetitive and tired mission structure. Poor AI.