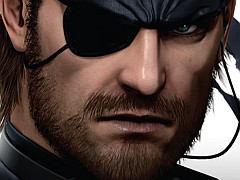 Released earlier this year on Xbox 360 and PlayStation 3, the Metal Gear Solid HD collection on the home consoles remains the one to get, though Armature Studio’s PS Vita version will still have plenty of value for handheld fans.

What you’re losing by opting for the Vita version, essentially, is resolution and a rock-solid 60fps framerate – this port of the game heads far closer to 30fps on many occasions. Metal Gear Solid 3 still looks very impressive on the Vita’s OLED screen, mind, whereas this diminutive version of Metal Gear Solid 2 actually helps smear over many of the nasty jaggies that affected the console port.

A bigger loss to some (many?) will be Metal Gear Solid: Peace Walker, a game I’m not particularly fond of though it’s maddening to see it removed from what should have easily been its best potential format. To see a version of the handheld title take advantage of Vita’s potential would have been fantastic, but instead we are left with the backwards compatible PSP version of the game on the PlayStation Store.

And you’ll excuse me for reusing this paragraph from the introduction of my 360 and PS3 review of the game, but it sums up my thoughts on the series too well to not be used again: I find myself both loving and hating the series in equal measure, riddled as it is with such obvious and detracting waffle. Often confusing cerebral thought with nonsensical melodrama, Metal Gear Solid is a collection of utterly barmy games that ridiculously labour over the minute details while ignoring even the most basic of big pictures. And how come nobody else on the team has ever been brave enough to tell Hideo Kojima he’s in desperate need of a half-decent script editor? Despite their myriad flaws, however, almost all of them are absolutely vital additions to the video game canon.

Game content is still the same, and this review will republish the text from the Xbox 360 and PlayStation 3 reviews of Metal Gear Solid 2 and 3:

It’s not so bad when you play through it again, actually, and you’ve got to hand it to Kojima Productions for having the balls to pull something so audacious back in 2001 – nobody I knew had even the slightest idea Solid Snake’s hotly-anticipated sequel would turn out to be a game in which he only had a passing role. But you can hardly blame the audience for hating the change of protagonist, especially after they rushed out to buy the sequel to Metal Gear Solid (and, in many cases, a brand new PlayStation 2 to play it on) only to find out the character they actually wanted to see was barely involved.

Metal Gear Solid 2 is a clever game, but it’s also too smart – often coming across as pompous, condescending and unreservedly cocksure. Blinded by the success of the original game, the sequel takes its plot to an almost incestuous level to create a metanarrative about recreating the events of the first game.

There’s a level of self-indulgence and pomp here that won the series as many fans as it lost, but today it’s hard to tell how seriously you’re supposed to take what’s going on. Whereas the original had you battling against surprisingly affecting enemies like Vulcan Raven and Sniper Wolf, the second has you taking on a big fat man named Fatman (and, yes, I’m aware it’s an elaborate reference to the atomic bomb) who attacks you wearing roller skates. Then, of course, there’s the preposterous addition of Liquid Snake possessing Revolver Ocelot through his arm, and Metal Gear Ray – a robot that actually roars at you. What??

The version here is based on the Substance re-release of Metal Gear Solid 2, so it includes 300-odd VR Missions, a Boss Rush mode and the option to play some bonus Snake Tales and Alternate Missions. A gimmicky inclusion to skateboard around the Big Shell – originally bundled as a shill for Evolution Skateboarding, Konami’s dire Tony Hawk’s knock-off – has not made the cut, however.

Metal Gear Solid 2 hasn’t aged well in the last decade, with textures now looking basic and washed out, but even now it’s clear how Kojima Productions has an impeccable eye for detail; just look at the hazy feel rain effects on Snake’s ill-fated journey through the game’s opening Tanker level, for instance, or how the wind blasts through the ship’s cabins (ruffling that precious bandanna) as Snake opens a door to the outside.

The real innovation to Metal Gear Solid 2’s controls was its FPS control scheme, a step for the series that has been mirrored in every subsequent game, although this snap-to single-stick aiming feels lumpy and unwieldy in 2012.

It’s more difficult to appreciate Metal Gear Solid 2 without having played the original, but this curious antique product will still tickle the nostalgia glands of anyone who was gaming at the turn of the millennium.

Metal Gear Solid 3 presented a much purer and simpler experience than the convoluted mess of the second game, and is by far my favourite entry in the series.

Setting up many of the mechanical frameworks that the series would attempt to recreate in later titles, Metal Gear Solid 3 tells the origins of the Snake that Solid, Liquid and Solidus would eventually be cloned from; I’d explain more, but we’d be here all year. Taking place in 1964, the hysteria and paranoia of the Cold War period is a natural home for the series’ storytelling. Lacking the stuffy self-indulgence of 4, when the abundant space offered by the Blu-Ray disc let Kojima’s fondness of overwrought cinematics spiral insufferably out of proportion, Metal Gear Solid 3’s relatively simple plot contrasts with a set of complicated rules and settings that make it the hardest of the series to actually play.

Snake Eater casts aside the indoor environments of previous Metal Gear games and takes players through a Soviet jungle, giving players a camouflage meter alongside new mechanics such as CQC, stamina and injuries. There’s a slower pace here than in previous games, putting the emphasis on blending into the environment and picking your time to strike.

For the first time in the series, then, Snake actually slithers. He also fights a preposterous boss who attacks him with bees, but the game’s incredible sniper duel more than makes up for that. Other moments, too, such as a long ghostly walk where you’re forced to encounter everyone you’ve killed, are some of the most memorable experiences I’ve had with video games.

There’s also something about the way Metal Gear Solid 3 is told that makes it so special – often conforming to the same tropes that blight MGS2 and 4, but somehow elevated above them thanks to a deft juxtaposition with some of the series’ most intricate and engaging set-pieces. Easily the most poignant and affecting of the series (and, unlike MGS4, this game actually knows when to end), its signature scenes – flower petals mixed with a sweeping score from Harry Gregson-Williams – are never anything less than beautiful.

Metal Gear Solid 3 was a game of soft colours and misty, tropical haze – the extra anti-aliasing complements the game’s aesthetic far more than most HD remasters. It is still a gorgeous game, right down to its immaculate details: having the place names pop up in Russian as well as English was always a sharp touch.

The version present here is the Subsistence edition, which corrects one of the original game’s biggest faults – the camera – and throws in versions of Metal Gear and Metal Gear 2: Solid Snake. Other bonuses from the edition, such as the Secret Theatre, Boss Survival Mode and the Ape Escape tie-in mini-game Snake vs Monkey, are not included. There’s also no Metal Gear Online, though this is no great loss.

Metal Gear Solid HD collection on the home consoles remains the one to get, though Armature Studio's PS Vita version will still have plenty of value for handheld fans.
8 Good versions of some iconic games Metal Gear Solid 3 is worth the price on its own Where the chuff is Peace Walker? It's still a shame some features were removed