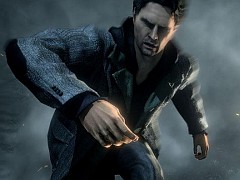 This review was originally published for the Xbox 360 version of Alan Wake, published by Microsoft in 2010. The PC version uses Steamworks and is being self-published digitally by developer Remedy Entertainment, with the retail release handled by Nordic Games. The port has been well-handled, including 4:3, 16:9 and 16:10 aspect ratios alongside AMD Eyefinity and NVIDIA NVISION2 3D. The mouse and keyboard controls feel stiff and awkward, however – I recommend using a Xbox 360 controller, which the game supports natively.

Both 8/10 scoring DLC packs – The Signal and The Writer – are also included, although these take place after the main game. A slightly more expensive Limited Editon also comes with Developer Commentary.

“It was Tuesday morning, my hands still slightly numb from the cold May air that had jolted me into consciousness on my morning commute to work. I stared at a blank Word document, the black cursor flashing on and off the page. I could feel the pressure mounting. It was only 20 hours until my review for Alan Wake would need to be published, yet my thoughts were all over the place. No doubt, the Xbox 360 exclusive survival horror game I’d finished the week before would rank as one of my favourites of the year, yet its flaws were weighing heavy on my mind. The clock ticked on to 9:38am. 9.39am. 9.40am. If only I’d already written about writing this review.”

Alan Wake is a writer, a hugely famous one at that. When he and his wife Alice arrive in the small town of Bright Falls, their location for an idyllic retreat, he’s treated as you might imagine Cheryl Cole would be during an appearance at the Croydon branch of Topshop. He’s a celeb, with posters advertising his latest book all over the place and his agent on the phone every other minute. The waitress at the local diner can barely string two words together, she’s so star struck. After a slightly bizarre encounter with two ageing rockers, Alan and Alice head to a lovely island cabin where they intend to have a relaxing few days together. Things, expectedly, don’t go to plan.

Remedy’s finely-crafted story is unquestionably one of the game’s biggest assets, and revealing more than the bare essentials would significantly reduce your enjoyment of the title. All you really need to know is that Alice goes missing, Alan’s work plays a huge part in the events that unfold and that darkness is very bad when you’re wandering around the heavily wooded Bright Falls. Things don’t necessarily go bump in the night, but they certainly like carrying chainsaws.

Light really is the backbone of Alan Wake’s gameplay and storyline. In the sunlight the town is as picturesque as a postcard, with sweeping vistas and gorgeous yellow beams piercing the tree lines. Once night falls, however, the darkness quite literally takes over. Alan, understandably goes on the hunt for his wife, but stumbles across an evil presence that is hell-bent on using Alan for its own wicked means. Bright Falls residents, possessed by the darkness, are just one of the many enemies Alan has to overcome.

These ‘Taken’ appear like black ghosts, but thankfully they don’t take kindly to light. Alan almost always has a torch in his hand (with various stronger versions collected as your progress), and shining this at a Taken will slowly rip the darkness out of them. This is important as conventional weapons do nothing to stop foes until they’ve been completely drained of the darkness. Initially the combat seems a little tricky, with the left trigger used for shining the torch and the right for firing your weapon, but within moments you’ll be draining Taken and dispatching them with a shotgun in one fluid, explosive sequence.

It’s not just humans who you’ll face, either, with the darkness very willing to possess inanimate objects, such as JCBs, trucks and massive wire spindles. At certain points you’ll even face flocks of birds, which come at you in a terrifying swarm of chirping evil. You can vaporize these with some well targeted light from your torch, but at times it pays to use Alan’s incredibly useful dodge move. If you’re in a bit of a pickle -and you frequently will be – the assortment of extra weapons and light sources comes in handy. Flares can be held aloft or dropped to scare off enemies and give you a moment to breathe or, better still, fired directly into the air or into nasties; a well-placed flare shot into a huge possessed flying boat will quickly end its assault from above.

Generators in the environment can often be powered up (one of the very few uses of QTE-like gameplay you’ll come across), turning on high powered lamps that can be used either as safe havens, at checkpoints and recharging health stations, or as a means to blast enemies. Certain beams of light are so intense that you don’t need to use a weapon at all, with the light itself being enough to send the nasties back to the darkness from which they came. If you can’t get to the light (something you’ll regularly be running towards while trying not to scream), a flash bang grenade or two will clear the local area as the white light makes mince meat of any Taken or possessed objects.

The survival horror genre has changed somewhat in recent years, with Resident Evil becoming more of a third-person shooter and Dead Space relying more on shocks than real scares. Alan Wake is a return to the terrifying ways of the genre’s past, with the setting, enemies and storyline working in tandem to create a truly unnerving experience. The world is linear, with the path to your objective usually quite obvious, but there are just enough ‘off the beaten path’ locations to make you believe Bright Falls is a real place. Enemy encounters aren’t overused and the stock of bullets and batteries (for your torch) is just enough to make you hesitant to keep your light on full beam, while also not too fearful to use it.

Storylines in games quite often wash over me, merely serving to give reason for the action that’s ensuing, but here it’s completely engrossing. The plot develops at a perfect pace, with twists and turns that make sense and compel you to continue. At the end of each of the game’s six chapters you’re treated to an incredibly cool piece of licensed music, followed by brilliant story recaps. I assumed these would be somewhat cheesy, but they’ve been handled superbly and add so much to the game’s cinematic quality.

Alan himself narrates as you play, which could conceivably annoy some players, but it undoubtedly keeps you engaged with the story and showcases the brilliant voice acting. Manuscript pages from Alan’s latest book – one he doesn’t remember writing – scattered throughout the levels detail events that have happened and, more interestingly, also those yet to occur. They serve as a clever collectable, with some only available to find when the game is played on the hardest difficulty setting. Hidden crates, coffee thermos flasks and tin can pyramids are also hidden in the environment for players who like to explore.

Much has been made of Alan Wake’s less-than HD resolution, but the bottom line is that it’s a stunning looking title. No game released so far this generation features lighting effects more impressive, or so much going on. At times, with the wind blowing, smoke in the air, objects flying around, flares alight and enemies coming at you, there’d be an argument for this being one of the most visually striking games ever released. It’s that impressive. During certain dramatic moments the game even pauses and pans around Alan, giving you a chance to take it all in.

Things take an unfortunate turn for the worse during the game’s many non-interactive cutscenes, however. Quite why isn’t clear, but in these scripted video sequences the animations appear to be jerky and the lip syncing is terrible. It doesn’t hurt the overall experience too much, as the voice acting is still excellent and the direction superb, but compared to the high quality on show at all other times, it’s somewhat jarring to see a car judder along a road and a woman speak as though she’s a ventriloquist’s dummy.

A special mention has to go to the audio work, too, which will make the hairs on the back of your neck stand up if you’ve got a good surround sound setup. It adds an immeasurable amount to the game’s atmosphere, which at times is so thick you’ll want to remain rooted to the spot, flare held aloft while you take a moment to calm down. The use of licensed music is a great touch, too, with the soundtrack being one of the best and most memorable I’ve ever heard in a video game.

Remedy and Microsoft haven’t made a perfect masterpiece, but Alan Wake may well be one of my favourite releases of 2010 – an escapade I’m going to remember for a very long time. It’s a stunning action game, a superbly scripted adventure and a technical showcase for the now-ageing Xbox 360 hardware. If you go down to the woods today you’re sure of a big surprise, but this ain’t no picnic.