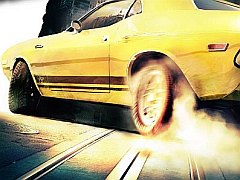 There’s a lot to be said for offering something new. While Driver San Francisco might look like just another entry in the long-running open-city driving series, in which you nip about in a variety of cars, evade cops and generally cause all-manner of vehicular-based carnage, what we’ve got here is actually refreshingly original. At the core of the experience is an arcade-like but weighty handling model that allows for rewarding, drift-heavy fun, and on top of this is a unique shifting mechanic that turns the genre on its head.

For some people the game’s concept and setup will be a little too “out there” to accept, but it’s essential to what developer Ubisoft Reflections has delivered. Veteran police detective John Tanner and his partner, Tobias Jones, are chasing down mob boss Charles Jericho, only for the tables to turn, forcing our crime-fighting duo to outrun a hijacked prison transport van. A disastrous crash results in a massive truck ploughing into the side of our hero’s Dodge Challenger, and then the crazy stuff starts to happen.

The accident leaves Tanner in a coma, with the events of the game unfolding inside his head – not that Tanner himself is aware of this. As a result of his condition, our hero is able to shift his consciousness to any other person driving a car. This is handled by a god-like overhead view that lets you target any car, bus, van or truck you like and then magically zoom into them as if you’re a modern-day Sam Beckett (the Quantum Leap character, not the playwright).

Initially this shifting mechanic doesn’t seem to add a great deal, with the tutorial levels only really hinting at what lies in store later on in the game. A tap of the shift button zooms you out of Tanner’s vehicle, as if you’re having an out-of-body experience, with the camera now looking down on the city below. To begin with this view remains quite close to the road, but as you progress through the story you’re able to zoom out further, covering huge distances in no time at all by flying high above the city.

It’s fair to say that this whole mechanic feels a little gimmicky at first, with even the characters having a hard time grasping what’s going on, but once missions start giving you the freedom to tackle them as you wish, Shifting comes into its own. Certain missions require you to use Shift in a very functional manner, zipping across town in order to find cars and then drive them to a drop-off point within a set time limit, but other assignments allow for far more creative thinking.

Race events are good fun thanks to the excellent connection cars have with the road, due to the weighty handling model. But you don’t need to approach these contests like a standard racer: If you’re falling too far behind the pack, you can use Shift to enter the driver of a semi truck heading in the opposite direction and then plough head-first into the leader, taking him out.

The ability to shift from body to body, car to car, makes Driver San Francisco a totally new experience, and that’s not something that can’t be said very often when talking about driving games – or any genre, for that matter. Developer Reflections also gets playful with its mission design now and again, using Tanner’s coma to deliver some crazy situations that stand out as the best the game has to offer. Towards the end things really go up a gear or two, with some neat ideas making for some thrilling sequences both in and out of a car. There’s no on-foot action though, which comes as something of a relief after what we’ve suffered in past Drivers.

Tying all the gameplay together is some competent and at times amusing dialogue from Tanner and co, who gradually become aware of what’s going on. There’s also some decent banter between Tanner and whoever he Shifts next to on his adventures: a hopeless street racer manages to start up a bizarre friendship as Tanner races to victory in a series of illegal competitions. Reflections also manages to conclude the story in a way that makes sense, both in terms of the plot and gameplay mechanics.

Core missions that develop the story are interspersed with city missions that must be completed in order to progress. On top of these there are tons of optional challenges, activities, dares, and felony missions to carry out, as well as 120 collectibles to find. Focusing purely on working through the main story will take around eight hours, but that could be doubled (or more) if you take part in all the side missions and diversions on offer.

Driver San Francisco also includes a substantial multiplayer offering for up to eight players, with a mixture of solo and team game types. These include modes for players who want a pure driving experience with no shifting, as well as several designed around the leaping mechanic. While perhaps the simplest mode on offer, I found TAG to be the most fun, with shifting making for some crazy multiplayer moments.

The play area in Driver San Francisco is massive (although it’s progressively opened up as you work through the campaign), and thankfully in single-player you’re able to cruise around at a smooth frame rate even on a fairly modest PC. Thanks to the benefit of PC gaming resolutions and superior anti-aliasing Driver San Francisco looks best on PC. Being a driving game it’s obviously a good idea to play using a gamepad rather than a keyboard. The wired Xbox 360 controller tested worked well, with the game changing most in-game button icons to controller buttons, although the garage menu displayed as if a keyboard was being used.

Driver San Francisco could have been a one-trick pony, but it has managed to use that trick in a variety of clever and interesting ways, ensuring the driving gameplay never becomes tiresome or generic. Get over the slightly ludicrous coma explanation, and chances are you’ll have a lot of fun with what Reflections has delivered. With a bit of imagination, the dev team takes the open-word driving genre to new heights.

Driver San Francisco could have been a one-trick pony but it has managed to use that trick in a variety of clever and interesting ways, ensuring the driving gameplay never becomes tiresome or generic.
8 60fps is wonderful Multiplayer is great fun Handling model is excellent Coma storyline will be too ridiculous for some

Tanner is back, but he’s in a coma and can shift between…

Tanner is back, but he’s in a coma and can shift between…