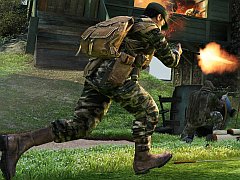 Do golfers love sniping or do snipers love golf? I don’t know, but Treyarch definitely suspects some kind of direct correlation between the two. I don’t have any bold answers for this perplexing brain teaser, but I can say it is frankly ridiculous the amount of times I’ve had to leap for cover underneath a golf buggy to escape a devastating volley of enemy PSG-1 rounds.

This is Hazard, one of the four adversarial maps introduced in Annihilation, Black Ops’ third premium map pack, and it’s an arena that lets competent snipers shine. But your first reaction to Hazard depends almost entirely on how much Call of Duty you’ve played over the years: if you’re old, withered, and miserly like myself you’ll be enveloped in this bizarre nostalgic recollection of World at War’s Cliffside map while you slowly realise that, hang on a second, Hazard is actually Cliffside redesigned.

But the map is also a telling indicator of how Treyarch’s design tastes have changed since its days of working on World at War as the Call of Duty B-Team. Compare Cliffside’s sterile, po-faced seriousness and unimaginative trappings with Hazard’s novel setting of a middle-class golfing attraction and you can clearly see a developer unafraid to experiment aesthetically with one of gaming’s most conservative franchises.

Jutting rocks and multiple lines of sight crisscross the putting green to give snipers an offer they simply can’t refuse. Not since 2Fort has there been a map where snipers will so happily compete against one another, but Treyarch ups the ante by making the most perfect spots incredibly unsafe positions to occupy.

Fans of the assault rifle or SMG (I’d mention the LMB but, let’s be honest, nobody actually uses a LMG) will be happy to know that the outskirts of Hazard can be navigated relatively safely, and while a few buildings dot the area the real advantage of these side corridors is that they deposit you directly behind groups of snipers and allow you to hoover up some quick kills.

I imagine Hazard will disappoint some as the map is small and there are very few places you can dig in and occupy, but anyone who likes a fast moving experience will find the map naturally to their tastes.

Silo, on the other hand, is one of the most complex maps ever produced by Treyarch. It doesn’t completely boggle the mind like First Strike’s Kowloon, but its large and dense playing area will demand at least a few goes before you’ll be able to accurately comprehend what’s going on.

There is little symmetry, too, which further complicates matters. One side of the map is on higher ground and provides a proper vantage point, but the low ground is peppered with vastly superior cover. It means you have to noticeably adjust your tactics depending on where you are, and with a greater extent than most other maps. If you’re smart, you’ll stick with an assault rifle.

Unlike Call of Duty 4’s Countdown – also set in a missile silo – this map seems to be set in a converted quarry, littered with haphazard cement tubes and an abundance of tarpaulin. Missiles constantly launch in the background while the action is playing out, which adds a nice touch to an otherwise standard looking map.

I find Silo fascinating but not exactly entertaining – it’s too big, for a start, and the central areas are basically locked off unless you want to be immediately shot in the head. The end result is a map where you essentially run around the edges while trying to make sure you’re not getting chased from behind. That’s not exactly thrilling. I’m sure it will prove difficult for the many players who stick to their tried-and-tested techniques, too – one polite fellow in a game over Xbox LIVE described Silo as an “absolute clusterf**k” and then said something I would not be allowed to repeat. Delightful.

On the opposite end of the scale we have Drive In, which fancies itself as the next Nuketown. It certainly lacks Nuketown’s simplicity, however, packing together dense combat zones and flanking opportunities within the aesthetic wrapper of the iconic American drive-in theatre.

The golden area is the cinema screen itself, which gives you a wide reaching view of the car park and the periphery areas. It’s an obvious magnet for snipers, but hard to secure because there are more entrances than there are claymore mines. Not much about Drive In is particularly flash or inventive, but its design produces some decent close-quarter skirmishes.

Drive In exists to satiate the need for a small map. It’s one of the few maps in Annihilation that feels like it isn’t made with the Ground War playlist in mind, and I’ve had a few intense Search & Destroy matches within its confines. The big problem is that it seems to inspire a few too many players to equip Ghost and hide around corners, but it’s packed with just enough areas to be interesting, and it certainly isn’t on the same level as Nuketown when it comes to rampaging manshoots.

Rounding out the competitive maps is Hangar 18, which chucks everyone into a slice of Area 51. There’s (presumably) zombies, a few aliens, and in one corner there’s a levitating apple in some kind of antigravity tube, which even makes funny noises when you shoot it. And you will try and shoot it.

Like so many of Black Ops’ maps, Hangar 18 designates a key central area – in this case a SR-71 Blackbird – and spirals the rest of the map out from this vital location. A group working together can secure the Blackbird and essentially lock down the map, but the chances of seeing this happen in a public match are virtually impossible.

Each side initially spawns next to their own sniping spot, which overlooks a good chunk of the level, and SMG users will likely flock to the airplane hangar to frantically hip fire at one another over and over again until somebody wins. Hangar 18 is solid if unspectacular, and while it’s nicely designed (and I certainly enjoy the colour palate at work) it doesn’t particularly excite.

And then there’s the compulsory Zombies map: this time we’re in Shangri-La, the mythical, hidden, and fictional Asian valley. Shangri-La feels immediately standard compared to Escalation’s Call of the Dead, which had your team being chased around by an undead George Romero, and it’s a very familiar style of map, though one with more restrictive corridors than most, with the traditional Zombies quartet.

New features include water slides, mine carts, and the entertaining 31-79 JGb215, a Wonder Weapon which can shrink zombies. There’s a new shrieking zombie, which blinds players, and the more dangerous napalm zombie, which explodes violently upon death and slows the movement of players when nearby.

Like Call of the Dead, Shangri-La contains a long and complex bonus quest involving a lunar eclipse, time travel, and Richtofen trying to harness the power of a shrunken meteorite. It’s very difficult to pull off (and I haven’t) but certainly a tempting test of skill for Zombies fans.

Annihilation is more than a simple map pack, of course – it’s a map pack for the most successful video game of all time, released just a couple of weeks before Activision starts publicly trialling Elite, Call of Duty’s latest online gambit with optional subscription features. With map packs making up a large chunk of Elite’s subscription appeal, millions of eyes are currently using Treyarch’s current performance to judge whether or not Elite will be a success in the future.

For the present, though, these are another batch of consistently entertaining maps built on the solid bedrock of sprawling architectural foundations.

Annihilation presents another batch of consistently entertaining maps built on the solid bedrock of sprawling architectural foundations.
7 Good range of maps Inventive design Price is expensive Silo is too big