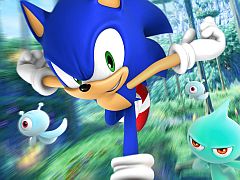 Reviews of recent Sonic games always open with the writer celebrating Sonic’s 16-bit history and then complaining that there hasn’t been a good title in the series since Sonic Adventure. It’s all an excuse to vent about how SEGA took a cherished character and tainted his name with mediocrity. But here’s the thing: handheld Sonic games have been great. The Sonic Advance series on the GBA was fantastic, updating the tried and tested Sonic formula with lanky new character models and a much better sense of speed. This quality was evident in Sonic Rush, too, which we went as far as calling “the best pure platformer on the DS”. While Sonic Team was busy tarnishing the blue blur’s name with increasingly shoddy 3D offerings, Dimps was reminding us why we fell in love with him in the first place.

Sonic Colours on DS doesn’t buck the trend. The premise is the same as the Wii version: Eggman has taken a break from trying to take over the world to build an intergalactic amusement park. Suspecting a nefarious scheme behind the doctor’s surprising move into the leisure industry, Sonic and Tails decide to check the place out. Their scepticism was well founded as the whole place is nothing more than an elaborate guise for Eggman’s most sinister plan yet: to capture a dying race of aliens and harness their innate powers to take over the world.

These aliens – Wisps as they’re known – are where the game derives its ‘Colours’ title from. The strange little chaps come in five different forms, each with a different colour and power. Collecting a Wisp imbues Sonic with its powers, which manifest with a tap of the X button. The red Wisp is my favourite, which turns Sonic into a fiery ball of energy. By holding the jump button, you can charge an explosion, which launches him into the air, destroying any enemies that happen to be around in the process.

In terms of plot and structure, Sonic Colours on DS borrows heavily from its Wii big brother. In its core gameplay, however, the portable offering is an altogether different beast. Firstly, it’s a 2D-only affair; the classic Sonic formula peppered with new twists. The strategic placement of Wisps also ensures that its gameplay is more thoughtful than simply running from one side of the screen to the other as quickly as you can. It’s still a quick game, make no mistake, but long stretches of sprinting are punctuated by Wisp-based puzzles, ensuring things never get dull. Colours certainly benefits from the slightly slower pace.

The level design is worthy of praise, too, with numerous paths through each level and several interesting traversal methods. You’ll soar through ring-filled skies on a glider, bounce into the air off the back of a giant squid and ride a whale-themed carnival float through a procession of badniks. There’s a lot of diversity in each world, with boss battles adding further variation.

Each of the six worlds is set in a different area of Eggman’s theme park, with two acts and a boss selectable from a map overworld. Every now and again one of Sonic’s pals will turn up, challenging the hedgehog to additional ‘mission’ levels. These actually present the greatest challenges in the game, asking that Sonic collect 100 rings or kill 20 enemies in a near-impossible period of time. They’re entirely optional, however, so less capable players are free to ignore them if they wish.

My only really gripe with the game is how quickly it all comes to an end. Although each level is a decent enough size, you can rush through the entirety of the game in a couple of hours. A ranking system gives an incentive to replay levels, and there are even Sonic 2-esque special stages for those looking to collect Chaos Emeralds, but ultimately it’s too short.

The quality of the platforming is hard to fault, however. It might not be very long and the narrative (despite some great writing) is entirely forgettable, but Sonic Colours lives up to the reputation set by its portable predecessors. Tight controls and incredibly well designed levels make Colours one of the best handheld Sonic games out there. Those people who find it hard to forgive Sonic for his past mistakes would do well to check it out.

Tight controls and incredibly well designed levels make Colours one of the best handheld Sonic games out there.
8 Some great level design Wisps powers are great Too short Throwaway story