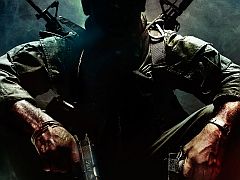 It’s never easy having a big brother, someone older and beefier who seems to get all the attention. For an FPS title, siblings don’t come any larger than Call of Duty: Black Ops – this year’s Moby Dick of the Three S’s: Shooting, Stabbing, and Shouting. On the evidence of this DS game, however, developer n-Space doesn’t seem too bothered by the pressure. The Florida-based studio has clearly done its best to interpret as much of the core experience as possible, and while the end results don’t exactly match the impact of Treyarch’s juggernaut, they’re not too bad either. As younger brothers go, this is a bit like Danny DeVito in Twins – stumpy and somewhat antagonistic, but still more effective than expected.

Rather than trying to directly copy the plot structure of Full Fat Black Ops (well, the hyperactive mess that was supposed to be a story), BLOPSDS cuts its own swathe through the grubby Cold War history of the Sixties, occasionally flirting with the path taken by the long-suffering Alex Mason. Your first assignment is actually a mission to rescue him from captivity in Cuba, but as veterans of the home console game will already know, this doesn’t quite go to plan. After this the campaign decides to start hopping about a bit, flitting between locations, time periods and character perspectives. You’ll visit Afghanistan, The Soviet Union and, naturally enough, Vietnam, and every once in a while you’ll get to pilot a vehicle or two – including a helicopter and a devastating prototype jet.

BLOPSDS (yes, I’m sticking with the acronym) presents the player with a choice of two control schemes. The first will be immediately familiar to anyone who’s sampled a previous stab at FPS gaming on the DS: the D-pad is used to move, your triggers are mapped to the shoulder buttons, and the touch screen is used to aim. It’s a rough translation of the classic keyboard ‘n’ mouse setup, and in theory it offers a very quick way to flit your reticule from target to target.

The alternative setup effectively turns the four face buttons into a makeshift second D-pad, effectively giving you bodged dual-stick controls. As you’d expect, this arrangement is a bit slower and less precise than using the touchscreen to aim, but it’s also more immediately intuitive. Under this setting, L is used for aiming down the sights (the other configuration requires you to tap an icon, which is ludicrously impractical) while R pulls the trigger. It’s not a perfect translation of the classic setup, but it’s not a million miles away either – much in the way that Justin Bieber would still be recognisable if you grafted a gherkin onto his stupid fat forehead.

Unfortunately for all concerned, both arrangements are likely to leave you with a severe case of wanker’s cramp after anything more than 10 minutes play. It’s a genuinely tragic shortcoming, because in all other respects n-Space has worked wonders. The game is pretty decent looking for what it is, with varied and sizeable environments, and the audio is top notch. These days it’s still not uncommon to see console developers skimping on voiceover, here’s a humble handheld title where almost everyone has a working gob. Your chatty NPC squadmates offer solid vocal work, and even when the enemy samples get a bit repetitive they tend to be endearingly funny: the Cuban troops occasionally shout something that sounds like, “Hola, Fraggle!”

And while the 16 campaign levels are decidedly linear, and the vehicle stages mere trigger-spamming diversions, there are lots of impressive design touches on display. It’s possible to shoot foes through light cover, just as it is in “proper” BLOPS. If you get close to an enemy, you’ll automatically knife them when you fire – and if you’re at a distance, it’s possible to throw your blade for a silent, instant kill. Levels are peppered with tiny change-ups and moments where the touchscreen is put to innovative use – wriggling free of the ropes that bind you, or positioning your squad ahead of an immanent rush of hostiles. You’ll happily ignore the poor AI of your opposition, the occasional difficulty spike, or the fact that you need to tap an icon to CLIMB OVER A LOG. You’ll forgive these transgressions because the developers so clearly care about their work.

But wait, what’s that crippling pain spreading through your left hand? Is it some kind of Lovecraftian evil presence? The early onset of arthritis? No, you’ve just been playing the game for too long, again. It’s a melancholy thing to complain about, and a baffling one too, because Dementium 2 (to give one example) never did this to me, despite using similar controls to BLOPSDS. The only thing I can think of is that the increased pace of the action is somehow to blame.

If you can get past the pain barrier, you’ll be delighted by the sheer flood of content on offer here. Each of the 16 campaign levels can also be played in Arcade and Challenge mode: the former gives you a limited amount of lives, while the latter sets you tricky goals to complete as you play. There’s also a timed assault course called Killhouse, and, best of all, a full-sized Zombies mode. This works in much the same way it does in Treyarch’s bigger-boy shooters, forcing you to hold out against increasingly tricky waves of the walking dead. It feels a good deal harder than the normal Zombies mode, with tougher opponents that can kill you instantly when you make a mistake, but there’s still the option to play with a friend.

Furthermore, there’s also a six-person competitive multiplayer mode. I’m not going to pretend I’ve played this, ’cause I haven’t really; I did try, but the messiness of Nintendo’s online setup ultimately thwarted me (you can go ahead and jeer now, I know there’s no excuse). Still, it’s pretty amazing it’s there at all; assuming you can find people to play with, you may well get a lot from it… provided that the rest of the game hasn’t reduced your wrists to powdered bone.

And that “if” right there is the killer, isn’t it? I find myself in a very difficult position at the end of this review, in that I have nothing but admiration for 90 per cent of BLOPSDS, but the remaining 10 per cent is utterly crucial. I can praise everything else until the cows come home, but if I can’t honestly say that I’ll play it again, I can hardly recommend it, can I? As horribly negative as it is to say, I’m not entirely convinced that an FPS on the DS is a particularly good idea. n-Space has almost pulled it off, but once upon a time I almost managed to make a chilli con carne with Quality Street in it, and that didn’t make sense either.

Still, I have a certain amount of doubt in my heart, and I suspect that there are people out there who can use these controls without suffering the same painful side effects. If you’ve had pleasant experiences with similar offerings – or if you’re some kind of weird Heroes character with extra-strong wrists – then by all means, add a couple of extra points onto the end of my score. Despite the game’s many other successes, everyone else should approach this with caution.

While Treyarch has essentially reduced Black Ops to fit on the Wii, it's impossible to engage with the game when so much of what's been lost is absolutely crucial to the experience.
6 Retains many of the HD version's features Savage cuts Looks tacky Feels like a bad port