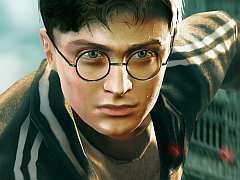 Harry Potter and the Half-Blood Prince is an adventure game based on the movie of the same name. You take control of Harry as he explores Hogwarts School, carrying out tasks for various people. The Death Eaters are causing mayhem in the Muggle and wizarding worlds, and Hogwarts isn’t the safe place it once was. Instead of the third-person action/adventure style of the home console games, the DS version is closer to a classic point and click adventure game, with mini-games cropping up frequently to give you a taste of being a wizard.

Half-Blood Prince is recommended for gamers aged 12 or over and shouldn’t pose too many problems for that age group. The adventure is never taxing, you’re always able to find out what to do next, and the mini-games (Quidditch, duelling, potion making, cards and marbles) are all simple to play and win at. The menu system might be a little confusing at first, especially for gamers younger than the target age, but it’s pretty easy to use once you’ve run through the in-game tutorials. There is a lot of reading in the game, which might not go down too well with some gamers, but it’s more or less expected from a DS title.

EA’s DS game based on the movie will please and disappoint in equal measure. On the one hand the school has been well created and fans will love how they can explore its hallways, but on the other you’re not really doing any of the cool events from the movie (or book). Most of your time is spent essentially doing chores and playing dull mini-games.

When you’re not doing that you’re trawling the school trying to find items, then finding the character you’re meant to speak to in order to trade the items with them. The best moments from the film are show in cutscenes, and not very exciting ones at that, with the characters just stood on screen with speech bubbles above their heads.

Spell casting is also a little disappointing, especially during duels. Rather than mimic the actions Harry does in the films, you simply click on the touch screen as if you were pressing buttons, which seems like a cop-out.

Harry and co all look close enough to their real-life counterparts to be recognisable, but the visuals on the whole aren’t great. The background image in each scene tears and moves around strangely as you move your character across the screen, and each of the characters animates in exactly the same way. The music is what you’d expect if you’re a Harry Potter fan, but there’s no voice work at all, with every conversation told via speech bubbles.

Harry Potter has a lot of adult fans, but this DS game will be too child-friendly for most of them. The repetition of tasks will be the biggest problem, as you carry out fetch quests over and over again, with little to break up the monotony. The story doesn’t help, either, as it’s so poorly told you’ll struggle to follow what’s going on.

Harry Potter and the Half-Blood Prince on DS is a hard game to judge. It’s monotonous and lacking the exciting moments of the book and film, but you do get to play as Harry and act like a wizard in Hogwarts. There are far better games for kids on the market, but this will just about do the job if a youngster simply must play the latest Potter game on their DS. If possible we’d recommend the home console version above this, although it too has its problems.

Half-Blood Prince is monotonous and lacking the exciting moments of the book and film, but you do get to play as Harry and act like a wizard in Hogwarts.
6 Lots of people to help out Hogwarts is cool to explore Nothing very exciting happens Visual glitches