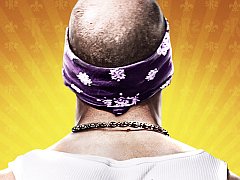 We really hope Volition and THQ are fully aware of the game they’ve created. Saints Row 2 is a game that excels at being bad. Whereas Rockstar’s GTA 4 did its very best to be the most accomplished, cinematic video game of all time, Saints Row 2 often goes in completely the other direction. You could play Saints Row 2 straight down the line, po-faced to the extreme, but doing so wouldn’t do the game justice. Volition’s game is at its best when played for laughs, ideally as a gender ambiguous main character, walking like an ape in a hotdog costume. If you’re still unsure if Saints Row 2 will be too similar to GTA 4, ask yourself this. Could you pretend to defecate into someone’s dead, motionless mouth in GTA 4? You can in Saints Row 2 and we’re probably going to Hell because of it.

Before we get to what makes Saints Row 2 great fun to play, it’s worth pointing out how well the game has been ported to the PC, or how badly it’s been ported. We’re running a machine well above the recommended spec yet the game suffers from extreme frame rate issues even when various detail settings are turned down. The performance is comparable to what we saw in Rockstar’s PC version of GTA 4, although Saints Row doesn’t feature visuals anywhere near as impressive. It’s a real shame that performance isn’t better, especially as this was an area that let down the console versions released last year. We’d hoped the PC version would allow us to play the game with a frame rate far superior to the console games, but that’s sadly going to be impossible for the majority of PC gamers.

Saints Row 2 picks up where the original game left off. Your character has just woken from a coma and has had to have massive reconstructive surgery – a neat way to let you create whatever character you like. To say the character creation tool is unique is an understatement. If you want to play as a bodybuilding male transvestite pensioner with a butch voice, wearing nothing but hot pants and crop top, you can. We wouldn’t advise it, but it’s an option. We opted for the comical genius that is the most attractive woman we could create, with an anguished face and a cockney man’s voice. This is the character that will appear and talk in the entire game (unless you get more plastic surgery) and it made for some utterly hilarious moments.

Seeing as you’ve been out of the game for so long and your main buddy Johnny Gat has been in prison, the Saints have lost their grip on the city of Stilwater. Three gangs, the Sons of Samedi, the Ronin, and the Brotherhood, have taken control, so it’s up to you to rebuild the Saints and take back what you consider to be rightfully yours. What follows is a lot of gang warfare, plenty of ridiculous characters, nearly endless amounts of killing and a whole lot of fun. The game’s 40 + missions mix shooting, driving, on-rails shooting, flying, boating, assassinations, and much much more. With a storyline that spans the three rival gang factions (and the Ultor corporation) there’s a lot to see in Saints Row 2.

Before you can take one of the story missions you’ll need to have filled your respect meter. This can be done by taking out rival gang members, performing stunts or by completing one of the many activities the game has to offer. Activities were a part of the first game, with the hilarious insurance fraud (throwing yourself in front of cars to cause the most damage), Mayhem (cause as much damage to property and vehicles as you can) and Snatch (murder rival pimps and recruit new hoes) all returning in the sequel, along with wonderful new additions such as Septic Avenger (spraying buildings a nice shade of brown) and Trail Blazer (set yourself on fire and drive around Stilwater on an ATV, blowing things up). In total there are 12 activity types to play, each rewarding you with vital respect points if completed.

While activities can only be accessed from certain locations in the city, diversions can be triggered at any time. Perform stunt jumps for rep points, drive taxi cabs for money and rep, join the ambulance crew and save the many unfortunate accident victims of Stilwater, surf on moving vehicles and take down zombie hordes. Combined with the more rigid structure of activities, you’ll never be short on things to do in Saints Row 2, moving from action packed mission to activity or diversion. The beauty of diversions is that you gain rep and cash from doing things that would otherwise be classed as messing about. Go on a crazed drive through the city with a passenger and you’ll activate a hostage diversion; hold up a pedestrian and you’ll start a mugging diversion. There are seemingly endless ways to earn cash and rep points.

There’s no denying that Saints Row 2 is an incredibly fun game to play and it rewards you for having a good time. Dressing your character in as much bling as possible increases your style rating, in turn increasing your respect multiplier. So not only does a giant demon tattoo look great, but it actually gives you a reward in the game too. Of course, you don’t have to follow the story missions or take part in activities and diversions. We spent a long time causing trouble and then taking on the endless waves of police officers that converged on our position. Whereas GTA 4 made taking on cops rather difficult, the ease of headshots in Saints Row 2 makes combat feel incredibly satisfying and nowhere near as punishing.

Rather than rely on a targeting system, Saints Row 2 uses the same free-aim system seen in the original game. Weapons can be picked up from dead bodies or bought from gun stores, and you can unlock new fighting styles that turn you from a thuggish brawler into move-pulling wrestler. Hand-to-hand combat is also pretty good, and you can now take hold of a pedestrian and use them as a human shield – before executing them or lobbing them into a brick wall.

One area of GTA 4 that didn’t go down well with long-time fans is the driving model. Rockstar ditched the arcade style handling of previous games in favour of a more realistic, heavier driving model. Saints Row feels a lot like older GTAs, with cars able to corner at high speeds and powerslide like you’re a stunt car driver. This won’t be for everyone, but it fits well within the world Volition has created.

You’d be forgiven for thinking that Saints Row 2 is in fact a better game than GTA 4, but slapstick fun can only take a game so far. The plot and storytelling in Saints Row 2 comes nowhere near to the brilliance of Rockstar’s game, coming across as rather juvenile in comparison. We’re almost certain that this is what Volition wanted to achieve, but that doesn’t change the fact that GTA 4 had far more believable characters, a richer storyline and real emotion. Saints Row 2 is arguably the better game to mess about in, but we’re unlikely to look back and remember the great moments as we already do with GTA 4.

We don’t want to bleat on about GTA 4 versus Saints Row 2, but comparing the two games from a production values point of view is inevitable. GTA 4 took the open world genre to new heights, whereas Saints Row 2 is happy to be serviceable. It’s by no means an ugly game, and at times can look rather impressive, but detail in the city is quite minimal, the frame rate is often poor and there are none of the finer details that GTA 4 packed in to strengthen the experience. Streets look barren, characters bland and the city just doesn’t feel as alive. Within a few hours with GTA 4 Liberty City felt like home, whereas many of Stilwater’s streets blend into one.

We can’t really comment on the voice work of the main character with any negativity (we played as a woman with a man’s voice), but we can talk about the many NPCs in the game. The key characters are voiced well and fit in with the tone of the game. Lesser characters aren’t voiced so well, but you’ll probably be too busy dressing your gang as ninjas to notice. The soundtrack, dished out over numerous themed radio stations, is also well put together – our personal favourite being the 80s station. You can’t beat going on a murderous rampage to Karma Chameleon.

Saints Row 2’s final trick is its multiplayer functionality, which gladly remains fully intact in the PC version of the game. The entire game can be played co-operatively with a friend. The game adjusts enemy health accordingly, and the whole thing is a lot of fun. Perhaps an even bigger surprise is how much fun the territory controlling multiplayer game Strong Arm is. Two teams of four go against each other across seven maps, completing activities and killing opponents to earn money. This money is then used to buy out the neighbourhood. Less original, but equally fun, is the deathmatch mode Gangsta Brawl – playable solo or as teams of up to six players across another set of maps.

Should you buy Saints Row 2? It’s down to what kind of gamer you are really, and if you have a really beefy PC or not. We loved it, but if you’re someone who takes games very seriously and are looking for a nigh-on carbon copy of GTA 4 this won’t be for you. If the idea of childishly laughing every time your character speaks in a completely inappropriate voice sounds fun, or you just want a game that positively encourages you to mess around, we can’t recommend Saints Row 2 enough. It’s just a shame that this PC version is even rougher around the edges than the already less than perfect home console editions.

If you just want a game that positively encourages you to mess around, we can't recommend Saints Row 2 enough.
7 Loads to do Great fun PC port isn't great Visually disappointing