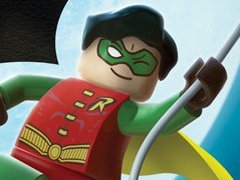 It’s not the greatest game you’ve ever seen on your DS, and it certainly doesn’t make particularly inspired use of the stylus, but it’s a surprisingly well constructed title that will last you for ages and captures the essence of the gameplay that has helped shift plenty of copies of the more illustrious home console versions.

The LEGO effect is again in full force. Developer Traveller’s Tales’ Gotham isn’t the Gotham you might have seen in Dark Knight this summer. It’s a super cute city with thousands of LEGO objects to bash, studs to collect and fairly simple puzzles to solve. The characters, from Batman and Robin to cult foes Riddler, Penguin and Two-Face, are portrayed less as scary, unpredictable menaces and more like a bunch of slackers who decide to rob a bank. No-one’s going to get hurt, and everyone’s going to have a laugh about it afterwards.

This is fine. This is what the LEGO- fication of Star Wars and Indiana Jones was all about. And so it follows with LEGO Batman, a game that anyone who played Traveller’s Tales’ previous titles on the DS will be instantly familiar with. The gameplay is almost exactly the same, indeed some would say too similar. But, as they say, if it ‘aint broke…

The DS version compares well to its home console cousins. The puzzles follow the same rules but are a tad easier than the ones in the 360 and PS3 versions. Characters have basic melee attacks, as well as special abilities and a jump. Batman, for example, can throw his Batarang and hit objects from a distance. Your time will be divided between building, fighting, platforming and puzzle solving. There are various suits that grant special powers as well. Batman can change into his Glide suit, for example, and glide over long distances with a double jump. He’s also got a Demolition suit, which allows him to lay and detonate bombs, opening up what would otherwise be impossible to access areas. Robin’s got a Magno suit, which allows him to walk sideways along metal paths. There’s loads of them, and almost all the puzzles involve you swapping into different suits and combining their various powers to progress.

Individual characters have additional special abilities of their own, too. Robin, for example, can travel through chutes to access hidden areas and can swing like an acrobat. Batman can use his belt to swing to higher areas. You’ll come across parts of levels that you won’t know how to access, and that’s because you’ll need to return to it with another character and use their special ability, for example super strength to bash down walls or immunity to poison to travel through poisonous gas.

The action is played out on the top screen of the DS, and you won’t ever have to use the touch screen if you don’t want to, since every action can be performed with one of the buttons on the DS itself. But you can use your thumb during certain moments if you really want to – to place and detonate bombs using Batman’s Demolition suit, for example, or to pull levers. In a way we’re a tad disappointed that Traveller’s Tales hasn’t taken the opportunity to make the most out of the DS’ unique control system, like the best games on the system, but, at the end of the day, your enjoyment with the game isn’t poor without it.

As far as story goes, it’s a predictable affair – all of Batman’s enemies have teamed up to break out of Arkham Asylum and plot to wreak havoc on the Gotham streets. They team up into different groups and head off to cause trouble. The Bat sign shines high in the sky, and Batman and Robin set off to sort everything out.

While you start the game in the Batcave, it won’t be until you’ve finished the opening Gotham Streets level that you’ll have the chance to do anything meaningful there. Once you do you’ll be able to jump into the first level in other Hero chapters as well as unlock a secret path to Arkham Asylum, which allows you to take control of the Villains and play through their levels. It’s nice that you’re able to access so much of the game’s content so soon after starting, and should appeal to people who are more interested in the Joker and Two-Face than the Dynamic Duo.

One of the best things about the LEGO titles is that there’s so much to collect and unlock. It’s the same with LEGO Batman on the DS. There are three Hero chapters, with five levels each and three Villain Chapters with five levels. That’s 30 levels in total, maths fans.

From the Batcomputer in the Batcave you can use your collected LEGO Studs to buy new characters to use in free play (once you’ve seen them in a level), buy extras, watch already seen story sequences and buy hints (although we doubt you’ll need them). You can also create your own LEGO character to play with, using one of the unlocked characters as a base. The more characters you unlock, the more options you have with customisation.

While for most fans it will be the single player that’s of most importance, there is a multiplayer function that allows you to play through the game’s levels with a friend just like you can with the home console versions. Both players will need a copy of the game to make it work – there’s no online play. As with the other versions, indeed any LEGO game, it’s better with a mate.

LEGO Batman on the DS is a solid offering that captures the essence of what makes the LEGO games great. It doesn’t make particularly good use of the stylus, and the graphics won’t blow you away, but if you’re a Batman fan you won’t find a better Batman game on the system. If you’re a fan of the LEGO games and you’re hungry for more, then the Caped Crusader has got you covered.

It doesn't make particularly good use of the stylus, and the graphics won't blow you away, but if you're a Batman fan you won't find a better Batman game on the system.
8 Loads to collect and unlock Classic LEGO gameplay Graphics aren't the best No clever use of the touch screen controls