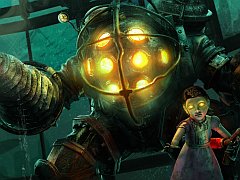 BioShock on PS3 has caused quite a stir in the office. On the one hand we’re delighted that 2K Games has brought the game, albeit a year late, to Sony’s console. Everyone and their dog should play this wonderful, intelligent and atmospheric shooter. But on the other hand, we’re a tad disappointed, because the all-star four-pronged developer assault on the PS3 port hasn’t taken the opportunity to right the admittedly few wrongs that shipped with the original 360 and PC game and make it a true, definitive ‘Director’s Cut’.

For example, the last quarter or so of the game hasn’t been touched. Now don’t worry, we won’t spoil it for you (if you’re a PS3 owner who’s managed to keep your head in the BioShock story-free sand for the last 12 months then you deserve a Blue Peter badge), but what we will say is that it falls away quite considerably after the brilliant plot twist (if you saw it coming, you’re lying just to look clever in front of your friends). Might 2K Marin, 2K Australia, 2K Boston and Digital Extremes (Dark Sector) offered an alternative, less disappointing finale?

And what of the game’s graphics? As we’ve been repeatedly told by 2K Games senior producer Melissa Miller, the goal wasn’t to improve upon BioShock’s already astounding graphics, but to get them on a par with the 360 version. To our eyes both versions look nigh on identical. There’s the odd poor quality texture here, the odd texture pop-in, as there was in the 360 version, but nothing that’s going to make the PS3 massive send poo through 2K’s letter box. Should the development teams have taken the opportunity to improve the game’s performance, and even surpass the graphics?

Are we being unreasonable? Are we demanding too much? Perhaps. But then look at the incredible work Eden Games is doing reworking the PS3 version of the flawed Alone in the Dark. And there was a hell of a lot more wrong with that game than there was with BioShock. Still, it’s a testament to the quality of designer Ken Levine’s game that we can only come up with a couple of tweaks that might have improved one of the best games of 2007. There’s absolutely nothing else we can think of that’s wrong with the game. Nothing.

It’s much easier to talk about what’s great about the game. So we will. It’s got the best opening 20 minutes of any video game ever. You play Jack, a passenger on a plane that crashes somewhere over the Atlantic Ocean in 1960. You miraculously survive, and swim for a mysterious lighthouse that protrudes from the sea and towers into the night sky. Inside the lights turn on, revealing a bathysphere that takes you on a journey to the ocean floor. A video from business tycoon Andrew Ryan introduces you to the breathtaking underwater city of Rapture, a city he built some 14 years previous as a rejection of all things Democratic, Communist and religious. It was to be a Garden of Eden where man was able to evolve into something better than he was above water.

You find Rapture in tatters, a city overrun by a populace gone mad through genetic engineering. Ryan’s not too happy at your appearance either – he believes you’re a government agent of some sort sent to bring the curtain down on his failed paradise. He sends the Splicers – normal people deranged by their pursuit of ADAM, the genetically modifying juice that everyone’s hooked on – to kill you. But you’ve also got to contend with the Big Daddies, too: huge diving suit-wearing ‘things’ so pumped full of ADAM that they’ve become something else. All they care about is protecting the Little Sisters: creepy little girls with red eyes that stick large syringes in dead bodies in order to harvest ADAM. The powerful Big Daddies will leave you alone if you leave the Little Sisters alone, which poses one hell of a conundrum: go through the game without ADAM, and the DNA-altering power it grants to aid your survival, or kill them, and the Big Daddies, in order to fuel your growing power? It’s a hell of a beard-stroker.

Your first experience with a Plasmid – a genetically-altering pack made from ADAM which grants you a super power of sorts – arrives almost as soon as you step out of the dripping wet bathysphere and into the crumbling walls of the city. Plasmids were sold to the citizens of Rapture as harmless, life-improving packs of pleasure. But Plasmids have a nasty side-effect – they drive users mad and are incredibly addictive. In many ways all of Rapture’s problems can be laid squarely at the door of Andrew Ryan’s Plasmids.

The Plasmids make BioShock much more than a straight-up shooter. Electrobolt, for example, shocks Splicers in place, allowing you to ‘one-two punch’ them to death with your wrench. But you can also use it to electrocute multiple enemies who are standing in water. Enrage makes foes so angry that they’ll attack the person nearest to them, friend or foe. Taking on a Big Daddy is tough, but it’s a lot easier with a pack of enraged Splicers backing you up. There’s even a Telekinesis Plasmid, which allows you to grab objects with your mind and use them as weapons. A Molotov cocktail-throwing Nitro Splicer becomes a less fearsome foe when you can throw its fiery grenades back at him.

There are loads of Plasmids in BioShock (the PS3 version comes with the new Plasmids that were made available via DLC for the Xbox 360 version) and as you progress through Rapture’s captivating innards you’ll pick up more and more of them, opening up your options when it comes to taking on enemies. Eventually Rapture itself evolves into a playground for you to enjoy and the Splicers become your playthings for you to experiment with as you combine Plasmids with the environment to cause murderous mayhem. Well, it’s you or them, isn’t it?

But BioShock’s true brilliance lies in the way Rapture tells the story of its own demise. Elaborately designed post-murder scenes and well-placed scribbles on the city walls paint a picture more striking than a thousand cut scenes. Discarded audio logs (a gameplay mechanic Irrational Games, now 2K Boston, pioneered with the System Shock games) unravel the secret of the city’s demise, and fill you with horror at what’s ahead of you. You’ll come to dread your encounter with Rapture’s insane plastic surgeon, for example, not because you’ve seen him cut up terrified ‘patients’ in cut scenes, but because you’ve listened to him attempt to rationalise his work via his personal logs and seen the fallout first hand on bloodstained walls and in ghoulish, disfigured female corpses you half expect to rise from their battered operating tables. It’s a completely and utterly terrifying mechanic, wonderfully executed.

BioShock is in many ways the perfect single-player video game. Atmospheric, creepy, thought-provoking and inspiring, it’s the perfect antidote for those tired of the trash-talking lobbies of online shooters. The only reason BioShock doesn’t get a perfect 10 is because the game falls away quite dramatically towards the end, as we’ve mentioned. But it misses out only by the skin of its genetically altered teeth. Some critics have pointed to the Vita-Chamber ‘issue’ as a critical flaw. These resurrection points effectively make death meaningless in that they respawn you after you’ve died with the damage you’ve done to enemies intact and a boost to your EVE meter (used to power Plasmid use). But you can turn them off if you’re in the mood for masochism. Or you could try the new PS3-exclusive Survivor difficulty mode, which makes enemies much tougher to kill, every resource scarcer, and Vita-Chambers less generous with the EVE replenishment. So hard is it in fact, that you have to think about how you’re going to use each and every one of your Plasmids to survive every encounter. No longer can you run about bashing everything with your powered-up wrench. And if you want all of the Trophies, you’re going to have to get used to it – one is awarded for beating the game on Survivor.

If you’re a PS3 owner and you’ve never played BioShock, you owe it to yourself to run out to the shops right now, hand over your hard earned cash, run home and spend the rest of the weekend with the lights, your mobile, and attention to family, friends and loved ones well and truly turned off. If you’re a PS3 owner and you have played BioShock, perhaps finished it, perhaps not, then we can’t really recommend you fork out the £40 or so it’ll cost you to play the game again. We know next to nothing about the upcoming PS3-exclusive Challenge Rooms, which won’t be out in time for release but will be out before the end of the year as downloadable content (expect a hands-on preview very soon), so can’t in good conscience suggest picking up the game for that reason alone. If you’re obsessed with BioShock, you might think it worth it for the Survivor difficulty mode, but for us, it’s not.

Overall, BioShock is still as powerful an interactive experience as it was a year ago. It’s lost none of its freshness, its newness or its impact. It’s the thinking man’s shooter and poster boy for the ‘games are art’ brigade. On PS3 it still is. For many BioShock was 2007’s game of the year. How funny that for PS3 owners it might be 2008’s.

Overall, BioShock is still as powerful an interactive experience as it was a year ago. It's lost none of its freshness, its newness or its impact.
9 Just as good as it was Superb atmosphere Approach situations in different ways Changes are minimal