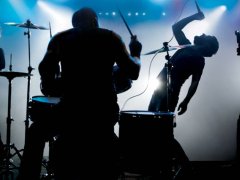 After the bad press MTV and Harmonix’s band game received over its combined £180 price tag there can’t be many people who aren’t aware of Rock Band, but in time for the European release on PlayStation 3 EA announced a price cut to the costly instrument collection. Whereas the game and instruments set cost Xbox 360 owners £180 on its launch in May, PS3 gamers can now walk into a store and hand over £30 less for the whole set. It might not push the game into cheap territory, but it’s a lot better than the bank busting £180 price tag from just a few months ago. With that in mind and the fact that you’ll be able to use all the instruments in Rock Band 2 when it launches in Europe, we can’t recommend Rock Band enough.

Just in case you’ve been living under a rock and don’t know how Rock Band works we’ll summarise. As the name suggests the game allows you to play as a Rock Band, not just as a guitarist as in the hugely popular Guitar Hero series. This includes a guy on drums, someone on lead guitar, someone on bass guitar (only one guitar is included in the instrument pack) and a vocalist on the microphone. If you’ve got the right amount of people you have a band, even if it’s faker than the designer shirts sold at the local market.

How it works will be very familiar to anyone who’s played Guitar Hero or SingStar. You play your instrument in time to the music and on-screen notes which scroll down the screen, while the vocalist sings along to the lyrics, trying to match the pitch of the original recording. You can choose to play a single instrument, but things reach another level with all four instruments in use. The screen is filled with musical notes – the three instruments take up vertical slots across the screen while the lyrics are displayed in a horizontal bar at the top.

To begin with most of the included tracks aren’t available, meaning you’re going to need to work through the World Tour mode in order to unlock them all. Here you’ll be performing at various gigs around the world, not just with single songs but with set lists. Sadly, you can’t continue a World Tour online, so you’re limited to playing through with just your closest friends, with online modes restricted to single events. It’s not a huge deal, but still slightly disappointing.

The brilliance of Rock Band is how everyone wants to play and not just on one of the instruments. In the office we regularly swap between guitar and drums and there’s usually a slight fight over which of our wannabe front men takes vocals. You can, if you want, sing and play an instrument (we have the mic on a stand), but it’s something best left to the professionals unless you enjoy looking like a complete fool.

This isn’t just a Guitar Hero copy with drums and a microphone added for good measure, but it’s close enough for Guitar Hero fans to jump straight in. On guitar star power has been replaced by Overdrive, you can use a second set of frets during solo sequences and there is an effects pedal on the guitar for changing the sound. Drumming uses the four drum pads and the foot pedal and plays remarkably similarly to the guitar sections, while singing is mixed with the occasional tambourine and the ability to go into Overdrive by shouting during certain parts of the track.

One quick song very easily turns into an entire evening of neighbour annoying rock, with the noise of plastic guitars and fake drums ringing in everyone’s ears. As with all rhythm games, knowing the songs you’re playing certainly helps, especially on the ever so difficult drums, but the selection here is solid and bolstered by a load of downloadable content – a ton of content is already available to buy for the PS3 version. The track list (67 tracks are included on the PAL disc) is plenty to keep you going with most players unlikely to master the hardest difficulty any time soon, but it’s far too easy to go on a spending spree in the online store.

Each track is rated for difficulty on guitar, bass, drums and vocals, as well as a rating for overall band play. Hardcore Guitar Hero players will likely find that all but the very hardest guitar tracks will be playable on the hardest difficulty without too many problems, so if you’re only going to be playing the guitar you won’t get the most out of the game. Mastering the drums and some of the trickier vocal tracks will take a long time though, and nailing them all together as a band is even more demanding.

Problems are present, such as the inclusion of a few foreign tracks in mystery set lists during the World Tour (not the easiest of songs to jump into without having any prior experience) and we still prefer the guitars included with Guitar Hero, but these aren’t enough to hurt what is a unique gaming experience. It’s all wrapped up with some superb visuals too, even if you’ll hardly get time to watch the virtual band performing behind the fast moving on-screen icons. If you’re unlikely to play with friends Rock Band is hard to recommend, with Guitar Hero being the more sensible option, but if you’re planning plenty of get-togethers, Rock Band will provide more than enough enjoyment to warrant its price tag.