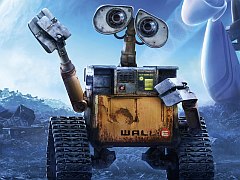 WALL.E is an action platformer based on the Disney Pixar movie of the same name. You play as the trash crushing robot WALL.E and are joined by the egg-shaped EVE. WALL.E sections play as a cross between traditional platform gameplay, puzzle solving and basic third-person shooting. EVE sections see the robot flying through the air in what are essentially race sections, but these aren’t nearly as frequent as the WALL.E stages. A selection of mini-games are also on offer.

WALL.E is one of the more complex kids titles we’ve played. There are numerous awkward jumps, Tony Hawk-style half-pipes, plenty of puzzles and a lot of collecting. Thankfully shooting plays a smaller part here than it does on the other home console versions of WALL.E, with puzzles, speed and jumping being the core gameplay elements. Although WALL.E is controlled with just the left analogue stick, the core gameplay elements are complex enough to challenge pre-teen gamers.

WALL.E is rated U like the movie. There’s a fair amount of action in the game, but it’s never anything that could be considered more than cartoon violence. WALL.E and EVE are both likable characters and should go down well with kids who have seen the movie and those who haven’t. The game follows the basic story of the movie, although it’s hardly an exact copy, with various sections expanded upon for gameplay purposes.

On PS2 WALL.E looks surprisingly good and it looks very different to the other home console versions. The levels are quite small, but they pack in plenty of detail and the game runs at a brisk frame rate for the majority of the time. WALL.E and EVE both look like they do in the movie and the game is bathed in eye-pleasing bloom lighting. Although nothing we haven’t seen before, there’s also a decent blur effect when your character reaches a high speed.

WALL.E isn’t very challenging for adults and will likely prove to be quite tedious. Numerous sections require the same action to be repeated and you’ll spend a lot of time smashing up cubes in order to collect items, which is ideal for young children but not great for experienced gamers. The various multiplayer modes provide a mild diversion from the main game.

WALL.E on the PS2 is definitely the most accomplished version available. The emphasis on platforming and puzzles suits the character and makes for a more thoughtful game. The controls can feel a little fiddly at times, but the strong presentation more than makes up for any slight niggles. Fans of this summer’s movie will likely find a game they enjoy, but don’t expect an action-oriented game like you’ll find on Xbox 360, PS3 and Wii.

WALL.E on the PS2 is definitely the most accomplished version available. The emphasis on platforming and puzzles suits the character and makes for a more thoughtful game.
8 Lots of platforming Pleasing on the eye Good mixture of gameplay Perhaps too much collecting

Players will take control of WALL.E and EVE through a fast-paced adventure…

Players will take control of WALL.E and EVE through a fast-paced adventure…