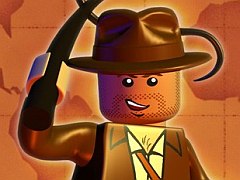 When I was a kid growing up, LEGO as a toy was pretty basic. You had various differently coloured, mainly squarish-shaped blocks, a few curvy ones, and – if you were lucky – you might also have had a few rather androgynous mini-figures, the differences between male and female usually coming down to little more than hairstyle. Then, as manufacturing processes got better, LEGO got a bit more adventurous – I can still remember the excitement one Christmas when I received a LEGO castle complete with knights… they even had little LEGO swords, shields, horses and everything!

Of course, kids these days would probably look back on my medieval castle (and related excitement) with scorn, seeing as now LEGO seems to come in just about any form you could desire – LEGO aliens, LEGO explorers, LEGO animals of all shapes and sizes, LEGO strippers (I may have imagined that one) and – of course – LEGO ranges based on a number of top movies and TV shows. Yes, you can get LEGO versions of superheroes, of Star Wars characters, and now even old (and I mean OLD) Harrison Ford is getting in on the act with plastic representations of everyone’s favourite fedora-topped, whip-wielding archaeologist.

It’s important to make one thing clear from the outset about this title: it’s very, very similar to the games that preceded it. I say this because I know that while many, many gamers embraced the simple-yet-addictive gameplay and tongue-in-cheek humour of those first LEGO games, there were those who simply didn’t like them. ‘Boring’, ‘Tedious’, ‘For kids’, and ‘Why would I want to spend hours smashing up LEGO blocks to collect stuff?’ were just a few of the comments I remember being bandied about when LEGO Star Wars first came on the scene. And for those people… well, if you really, really didn’t like the LEGO Star Wars titles, then it’s a simple fact that you won’t like this one either. So you might as well stop reading now and go off and play The Sims or something.

For those of you though, who saw LEGO Star Wars as a light-hearted, very playable, at times downright hilarious parody of one of the best movie series’ of all time, and one, surprisingly, which seemed to be equally as enjoyable for kids as it was for adults, then LEGO Indiana Jones: The Original Adventures is certainly worth a look. As mentioned already, the format is almost identical to the previous games. You are offered a choice of the three original Indy movies (no Crystal Skull here people) each of which is divided into different levels that are set in and around the various key scenes in each movie. So expect to be running from the massive boulder in Raiders Of The Lost Ark and hopping into a mine cart for Temple of Doom. As you explore the levels, you have to perform tasks, solve simple puzzles and – to put it bluntly – smash the crap out of the scenery in order to reveal and collect LEGO ‘studs’. These studs serve to boost your score, unlock bonus items and also act as currency, allowing you to buy things in the shop you find back in the lobby level – the lobby this time being Barnett College, a building more suitable for an eminent archaeologist than say, Mos Eisley Cantina.

As before, there are also various other secrets to be found, such as golden ‘artefacts’ (10 per level), special red LEGO bricks (one per level) and Map pieces (3 per level) each of which gives you access to certain bonuses once back at Indy’s college. So basically, anyone who’s played LEGO Star Wars will know exactly what to expect – all the same kind of gameplay as before, only this time instead of the outer-space Star Wars theme everything has a sandy, cob-web dusted Indiana Jones look to it. One of the biggest differences is probably the lack of the Force powers and – strangely enough – no lightsabers, however Indy has his trademark whip, and the supporting characters have a range of talents including using umbrellas to travel on zip-lines with, shovels to dig for hidden treasure, bottles to lob at enemies and even little pet monkeys which can be used to access areas of the level that the human characters can’t get to.

The levels all incorporate various puzzles and secrets which can only be cracked with the help of certain specific characters – like trapdoors which only the small characters can use, or mystic totems which can only be activated by ‘believers’ – and because of this in order to fully complete the game and find everything you need to play through every level at least twice, once in ‘Story’ mode, where you are restricted to just the two or three characters who are the heroes of that part of the story, and then again in ‘Freeplay’ mode, where you are given a selection of the characters you have unlocked so far, and can swap between them at will by tapping the Touch Screen in order to tackle any puzzles that you couldn’t do in Story mode.

This need to play the levels again greatly increases the replay value, particularly since by playing through more than once you often unlock some kind of bonus mini-game which is accessible from Barnett College, and many of these games are well worth the effort it takes to find them. They include various pattern-matching puzzles which you can play to greatly increase your stash of LEGO studs, suitably Indy-type mini-games such as having to survive being dragged behind a truck on your whip using the stylus to avoid obstacles, and more unusual ones such as where you have to correctly cook and serve some exotic bugs for a Thuggee priest! There are also a number of puzzles requiring you to manipulate various different shaped tiles to create a picture, as in the DS puzzle game Neves. Other bonuses include in-game extras, such as a x2 score multiplier. This might not sound like much, but if you, like me, spent many hours trying to fill the golden stud bars on every level in the previous LEGO games in order to earn those last few elusive Golden Bricks, only to find that on certain levels this was nigh-on impossible to do, then this score multiplier comes as something of a godsend.

At the beginning and end of each level, and at various points throughout, you’re treated to rendered LEGO-style FMV cut-scenes which move the plot along, and offer a humorous tongue-in-cheek take on events in the films. My big worry with the DS version was that – owing to the limitations of the machine – these would not be included, so it’s nice to see that they have been. However it’s worth pointing out that the quality of these scenes on the DS is not the best, not by a long shot. It looks for all the world like someone just filmed the high-res original FMV sequences on a mobile phone, and then bunged them straight on here, with the result that the quality is NOT good. Still, better duff quality cut-scenes than no cut-scenes at all, and they ARE worth watching.

Bearing in mind that LEGO Indy is basically the same game on every format, it’s obvious that some thought has actually gone into how the Touch Screen can be used for the DS version. In the main platform game, such actions as picking up objects, digging, working switches, and using Indy’s whip to swing across gaps or grab stuff can all be carried out by using your thumb on the Touch Screen. In almost all cases though, you can also simply press the A button for the same action, which is often easier to do when things are hotting up. The only thing I’ve found so far which you can’t do with the A button is a specific type of switch which requires you to turn a handle – the A button won’t work for this, and instead you have to move your thumb in a circular motion on the lower screen. The microphone is also used in the game; for blowing out flaming torches (which sometimes gets you hidden bonuses) and also – in another neat touch – for blowing up inflatable rafts prior to travelling on any water. The Touch Screen then comes very much into play in all of the mini-games which you can access from Barnett College.

The DS version, like the other versions of the game, also offers a co-operative mode that allows you to play with a friend through the adventure, each of you in control of one character. Unlike the non-handheld versions of the game though, you obviously require two DSs in order to play, and – unfortunately – two copies of the game. This is presumably because there’s so much crammed into the game already that downloading levels to another DS would simply take too long, but it’s still a bit of a shame, as one of the best things about the LEGO Star Wars games on the home consoles was that parents could play them with their kids, and on the DS this obviously requires extra cost. With that in mind, if you’ve got both a DS and one of the other consoles, and want to play this with a friend, then I’d probably have to recommend getting a home console version. That said though, if you’ve got two kids, both with a DS, and you want to ensure they’re kept amused on a long car journey or two, then it’d be well worth shelling out for two copies of this game as the wireless mode should keep them amused for many, many happy hours.

So in summary – this is basically exactly what fans of the last few LEGO games will be expecting: fun, not-too-taxing, enjoyable gameplay with tongue-in-cheek humour, loads of stuff to unlock and plenty of replay value. If you loved the last games and you like Indiana Jones, then you’ll more than likely love this one too, although there’s a tiny possibility that eventually you might start to feel that perhaps you’ve played it all before.

If you loved the last games and you like Indiana Jones, then you're more than likely to love this one too, although you might start to feel that you've played it all before.
8 Play through the memorable scenes of all 3 movies Loads of unlockable Touch Screen mini-games Lots of hidden extras offer great replay value Essentially exactly the same gameplay as in LEGO Star Wars