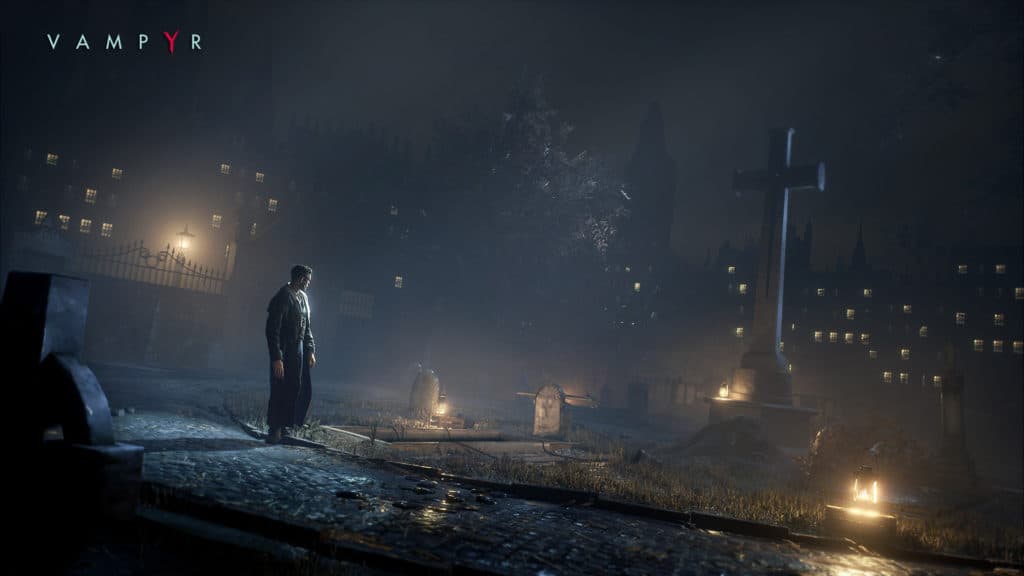 In Vampyr, the easiest way to level up is by draining someone’s blood until they’re dead. It’s how you get the most XP. Then you go and rest in a safe location, absorbing the energy and growing your powers. This is such a natural and logical way to do ‘being a vampire in a game’ it’s surprising it hasn’t been widely used already.

It’s not quite as simple as that, though. Shitty people have shitty blood, so you’ll get less from it, while nice people have delicious, premium gold top blood. This would appear to be a no brainer still, except that the citizens in the different districts of Vampyr’s semi-open, distinctly gothic London, are all connected. Killing a nice little old lady who makes medicine for a homeless young man will make the whole district worse off: her house will be looted, aforesaid young man would probably die, and the Spanish flu will spread further, making everyone’s blood worse. It could even change the economy.

On the other hand, you could kill her son, a violent murderer. His death would improve the district, but you’d get fewer experience points to boost your power. Essentially the choice is kill one good person to become more powerful but make everything else worse, or kill a lot of awful people and have to put in more effort.

During the E3 preview presentation, the developers kept saying ‘Cursed be the choice,’ which is something of a catchphrase for Vampyr’s marketing. The reason decisions are presented as so morally troubling is your character: you play as Dr. Jonathan Reid, recently returned from the First World War (although, obviously, at the time they didn’t call it that) and even recentlier a vampire. As per his Hippocratic oath, he’s not really keen on eating people. But when push comes to shove, he’ll have to decide which of the citizens he’s trying to protect from the flu are worth sacrificing so he can save the rest. Each neighbourhood in London also has a ‘pillar of the community’ who keeps things fairly stable, but if, as was the case in the demo, that pillar is an angry Catholic priest who has taken to eating dead flesh, what cost will there be?

This imposition of a moral code is useful when you want the player to think carefully about relentlessly murdering everyone they run into just because they can. I suspect many people, like me, would raise as much hell as possible before giving everyone the finger and backflipping through a plate glass window, yelling ‘I’m a vampire, bitches!’ on the way out; as Jonathan Reid, however, you’re a careful, softly spoken man who cuts a vaguely Holmesian figure in a trench coat, and it’s easy to imagine how troubling he finds the new, monstrous side to his personality. God forbid he be impolite to people.

Interacting with the citizens is a surprisingly huge part of the game. Every citizen in London has a name and a personal background, with links to the other NPCs. With careful questioning you can discover all these links, winkle out secrets, and find out what blood purity level everyone has — and, consequently, who might be worth a quick bite. The tapestry of London, with all these interwoven threads, is so fascinating that you almost forget the whole, you know, supernatural action RPG thing.

Reid can’t enter houses unless he’s been invited in. He can mesmerise humans to try and control them, and see their thudding heartbeats through walls. As he explores London he must contest with other mutated, feral vampires known as Skulls, and vampire hunters calling themselves the Priwen Guard. In combat he combines ranged attacks, melee weapons, and super-special vampire powers that do a range of horrible things involving blood. It moves fast, but seems consequential: the dev playing the demo was keen to avoid being hit, using a lot of dodging.

Vampyr is going to be compared to the Vampire: The Masquerade games, because Activision’s early noughties RPGs are the last vampire games anyone can remember, but  right now it’s looking entirely different. It’s not sexy, streetlamp lit LA, with cool nightclubs inside disused churches, where you can safely drink someone’s blood if you chat them up properly. Vampyr is elegant, but still down and dirty: a well-crafted, delicious slice of extra dark chocolate gateau, served by unwashed hands.

You’re not happy about being a vampire. You are a lonely man walking the labyrinthine streets of a grimy city ravaged by disease, killing out of necessity rather than for fun. A man who sees the consequences of his actions. Vampyr has multiple endings, and, we are told by a developer, ‘You will have the ending you deserve.’