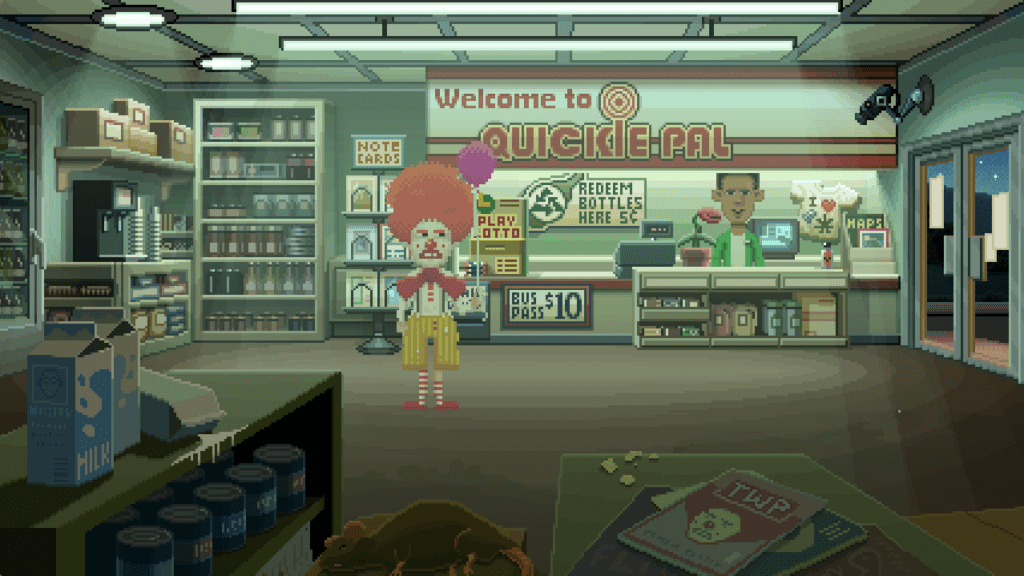 Thimbleweed Park, I am told, is a big game. Big in terms of actual size and number of areas, or big in terms of the density? ‘Oh, both,’ is the reply from Ron Gilbert and Jenn Sandercock, who took me through a half-hour or so of a preview build. Jenn Sandercock, who is on the team as a gameplay programmer, and told me she mostly coded on the Hotel area, played the game for me and added some running commentary; Ron Gilbert, legendary luminary of games development, occasionally interjected and expanded, but spent a lot of time giggling quietly at his own jokes. If anyone has earned that it’s probably him.

After playing through the build myself it’s clear both the reactions are warranted: it is a very funny game, full of jokes both of the reflexive metatextual, fourth-wall-breaking, we’re-in-an-adventure-game kind as well as the regular kind; it is a big, dense game, and you will probably never find all the details in it. The preview took up only one area of Thimbleweed Park (the titular town itself), but this included, among other things, a diner, a cake shop that isn’t a cake shop, the QuickiePal store and toilet (featuring customisable toilet roll), a murder scene, an occult bookshop, and flashbacks that take you to two of the other areas.

Able to switch between five protagonists, including two federal agents of differing enthusiasm and an extremely profane clown, you explore this washed up, broken down backwater and its surroundings. Thimbleweed Park is set in 1987 — for no other reason, Gilbert told me, than because it’s the year the Lucasfilm classic adventure game Maniac Mansion came out — and suffused with a kind of X-Files and Twin Peaks-style consciously weird weirdness. ‘I’m a big David Lynch fan. I really love everything he’s done,’ Gibert said. ‘I really like how he tends to take normal settings and just make them really, really bizarre.’

This is certainly true of Thimbleweed Park. It’s an odd place and at times unsettling, populated by a group of incredibly strange people, yet full of the moments of levity that ran through the old Lucasfilm games. There are loads of little nods to Maniac Mansion if you’ll recognise them, and characters make references to adventure games in general, as well as 2017 — picking the year ‘at random’, of course. The town plumbers are called the Pigeon Brothers which, if you talk to them, turns out to simultaneously be and not be a misnomer. The whole economy here was once based on pillows, and now involves vacuum tubes. Agents Reyes and Ray are there to investigate a murder, but that’s not their real reason, and neither of them will open up about it. The old factory burnt down, but was the security guard framed? And what’s the deal with this dead guy, anyway? And what about the other dead guy?

There’s a lot of game in this game. Gilbert and Gary Winnick, partners in crime from Maniac Mansion and now working together as co-creators of Thimbleweed Park, are no longer constrained by old school tech. ‘We were just constantly fighting with how much memory we had,’ Gilbert told me. ‘Now we basically have unlimited memory.’

While there’s the classic nine verb menu and onscreen inventory from the OG Lucasfilm games, Thimbleweed Park has a massive colour spectrum. It’s got 47 speaking roles totalling 16,000 lines. It’s got background landscapes that parallax behind you like a motherfucker, and water that ripples and reflects whilst still being, you know, all pixely. ‘We wanted to build a game that was how you remember those old games,’ said Gilbert, laughing a bit. ‘You remember Monkey Island smooth scrolling and parallaxing and light bouncing off everything, but none of that was really there. We just wanted to recreate that. It’s really about your memory of those old games.’

Some of the gameplay, especially the controls, is streamlined to meet modern audience expectations. Gilbert told me they wanted to make sure they made a ‘true point and click game’ that didn’t put off hardcore fans of the genre, but was also open to people who love narrative games or didn’t really game at all. ‘It is a hard balance. It’s one of the reasons we did casual mode and hard mode.’

In casual mode there’s a tutorial that explains to pick up a rock you have to click on ‘Pick up’ and then click on the rock — but this is only if you choose to play the game on casual mode, which also removes steps in some of the puzzles for those who aren’t adventure game veterans. In hard mode there might be a tree branch blocking your way, while in casual mode the branch has already been sawn off.

The puzzles in hard mode are difficult, but not nonsensical. You can see the shape of what you need to do, and you’re pretty sure you have almost all the parts, you just need to start get them in the right order, because you’ll be damned if you believe this hot sauce makes you breathe fire for no reason. Wait a second, didn’t you see a fireplace somewhere? Getting some of the puzzles right felt like how I imagine parents feel looking into the face of their first born child. I was stuck on one involving a map and a journalist for at least 10 minutes.

If the old school point-and-click adventures are like a Mini or a Beetle (classic, compact, beautiful in their own way, considered groundbreaking by many, and remembered incredibly fondly) then Thimbleweed Park is a goddamn Ferrari by way of a Cadillac, firing on all cylinders and with an escort of motorbikes ridden by Hell’s Angels, who are all dressed in 80s leather and looking all cool and shit. They both have the same basic form and look kind of similar, but one has clearly got a lot more going on than the other.

Thimbleweed Park. The King is dead. Long live the King.